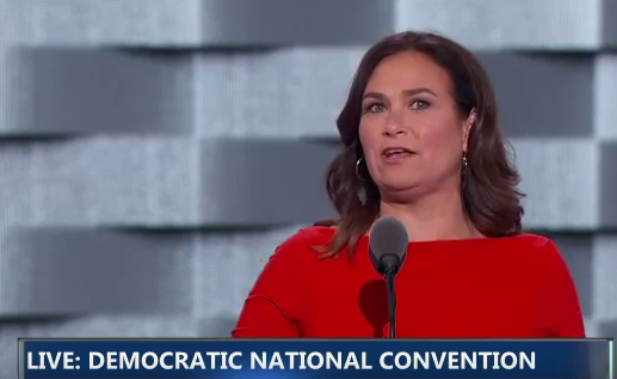 The Democratic Party is deciding who will lead them going forward, after suffering crushing losses on election day. Donna Brazile is stepping down as chairman of the Democratic National Committee, and there has been much speculation as to who will replace her. Reportedly, Ilyse Hogue — president of abortion advocacy group NARAL Pro-Choice America — has been asked to consider running, The Hill reports.

NARAL National Communication Director Kaylie Hanson Long announced that Democrats have been urging Hogue to throw her hat into the ring. “In the last week many people within the Democratic Party at both the national and state level have approached Ilyse about running for chair of the party. She is listening and considering all her options,” Hanson Long said in a statement. “[Hogue], like millions of Americans, wants to do everything in her power to stop Trump from enacting his dangerous and reckless policies. She will be considering what platform is best to accomplish that goal in the days and weeks ahead.”

Whether Hogue will be chosen to lead the Democratic Party is yet to be seen. But Democrats should consider carefully whether they truly want a pro-abortion extremist like Hogue leading them. NARAL hired Hogue ostensibly for her marketing expertise, and she quickly dove into her role as abortion activist. She has smeared pro-lifers as liars and cheaters, and has shown herself to be out-of-touch with the American people. She opposes laws like mandatory hospital privileges for abortion facilities, 20-week abortion bans, and parental consent requirements, even though Americans overwhelmingly support these common-sense measures.

And while Hogue is happy to attack pro-lifers, that may not make for the wisest choice to lead the DNC, considering that more young people than ever consider themselves to be pro-life, and just under half of Americans call themselves pro-life as well (the same rate as those who call themselves to be “pro-choice”)., on

The Democratic Party’s 2016 platform was notable for its pro-abortion extremism, something that Hogue of course applauded, despite the fact that many of the measures Democrats supported are, again, opposed by the majority of Americans. Hogue also addressed the Democratic National Committee this summer, where she promoted her own abortion story, and received overwhelming cheers in response.

The Democratic Party is understandably struggling to figure out the best way to reach the American public after resounding losses. But putting a pro-abortion extremist like Ilyse Hogue in charge would be a monumental mistake that would only further alienate the majority of Americans who do not support things like taxpayer-funded, on-demand abortion, at any time, for any reason.

The simple fact is, even among Americans who consider themselves “pro-choice,” Americans want heavy restrictions on abortion. Choosing someone to lead the Democratic Party who would ignore the majority of Americans in order to appease the abortion industry, along with the small but vocal minority of pro-abortion extremists, will not lead Democrats to victory.