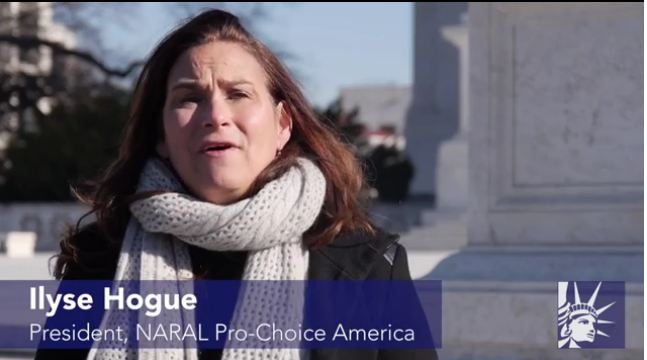 Since the November election, the Democratic Party has been in a bit of a tailspin. After suffering brutal losses, party leaders have been taking stock of why they lost — and many have begun calling for the party to step back from its pro-abortion extremism. The 2016 party platform went further on abortion than ever before, including calling for an end to the Hyde Amendment, which bans taxpayer funding for abortion except in cases of rape, incest, or to save the life of the mother.

That extremism is now facing a sizable pushback, even among pro-abortion Democrats, Barack Obama’s former faith director, and Catholic Democrats. This has infuriated pro-abortion activists, who insist that the party’s stance on abortion is not only not too extreme, but that it needs to go even further. The latest example comes from none other than Ilyse Hogue, president of NARAL Pro-Choice America. Hogue nearly ran for chair of the Democratic Party before pulling out in late 2016.

Hogue penned an op-ed for “Vox”, where she argued for the need to “affirm our party’s base”, and urged Democrats not to waver on abortion rights. “[A]merica had just come through an election in which Hillary Clinton ran the most progressive campaign on abortion rights ever,” Hogue wrote. “So why are some Democrats still undermining themselves by pointing fingers at the rights of a majority of the population?”

Then Hogue claimed that Americans support abortion, and don’t want it to be threatened.

“Abortion has been legal in this country for over forty years and most people want it to stay that way,” she argued. “Support for reproductive freedom goes far beyond the Democratic base. Seven in 10 Americans support legal access to abortion, period. This is true across ethnic, geographic, and age lines. Even a majority of rank-and-file Republicans support this right, and a plurality of self-identified ‘pro-life’ people do as well.”

Hogue is right that polling shows that most Americans want abortion to be legal. What she fails to mention is that the position of her organization — NARAL — is in direct opposition to Americans’ views on virtually everything else when it comes to abortion. As to whether Americans consider themselves to be pro-life or pro-choice, that number is virtually tied, with 47% calling themselves pro-choice, and 46% calling themselves pro-life. And while the majority of Americans want abortion to be legal, the majority also only want it to be legal only under a few circumstances, according to Gallup polling. Most Americans also do not support abortions being performed in the second or third trimesters, by overwhelming majorities. Strong majorities of Americans also support restrictions like waiting periods, parental consent laws, informed consent laws, bans on procedures like partial birth abortions, and laws requiring abortionists to counsel women on alternative options before getting an abortion. Americans also oppose taxpayer funding of abortion. The majority of Americans also view abortion as morally wrong, not morally acceptable.

NARAL opposes virtually all of this, advocating that abortion remain legal through all nine months of pregnancy. They also oppose the Hyde Amendment, bans on abortion procedures, parental consent laws, and laws requiring counseling. In short, NARAL opposes everything that Americans approve of.

Hogue may try to claim that she’s speaking for the Democratic Party base, but it’s not true — she’s not advocating for Americans, and she’s certainly not speaking for Democrats, around one-third of whom are pro-life. Make no mistake, Hogue is advocating for her own interests as president of NARAL. She writes that the Democratic Party “faces fundamental questions of morality and political identity which it both needs to solve immediately and must move beyond almost simultaneously”, while also lamenting the difficulties of uniting people. Yet Hogue is not willing to actually listen to the American people. She is more concerned with advancing her own pro-abortion extremism than she is with doing what she claims to be advocating for — uniting people.

Democrats would be wise not to listen to Hogue. What she advocates for is not a winning strategy, and no matter how much she tries to claim otherwise, the reality is clear: the American people do not want to support a party of death.