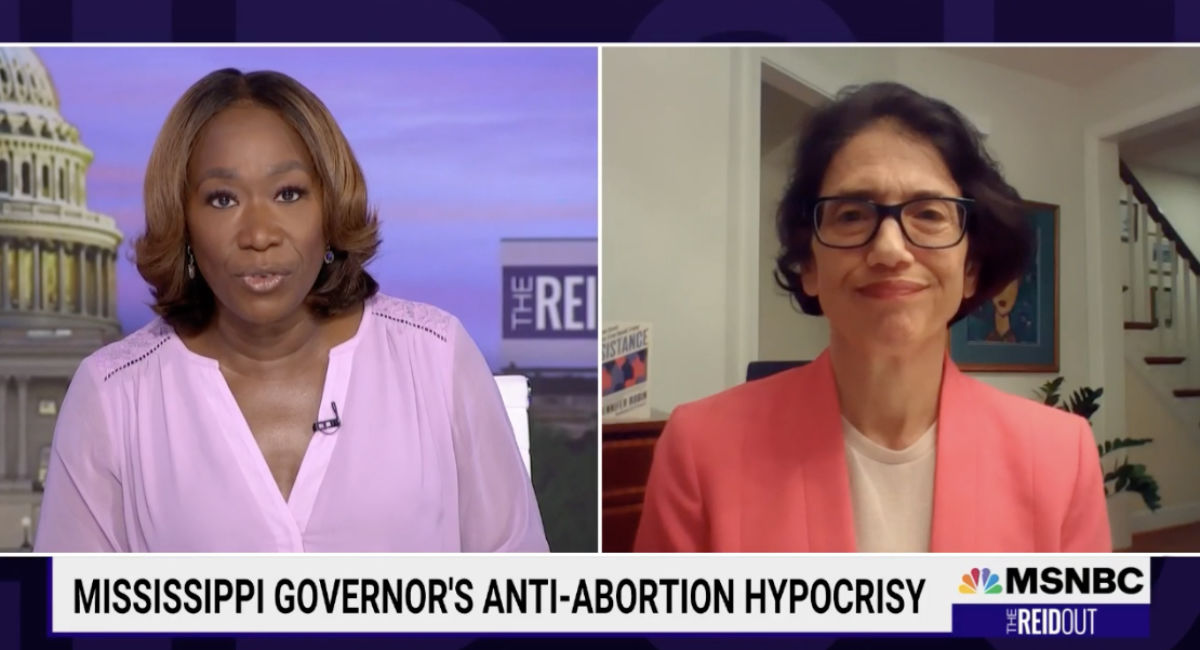 On MSNBC’s The Reid Out with Joy Reid, Reid claimed that women will die if the Mississippi law is allowed to stand. “Bodily harm and death will certainly increase if safe and legal abortions go away,” she said. But in the more than three months that the Texas Heartbeat Act has been in effect, there has not been one instance reported of a woman dying due to a lack of access to abortion. The truth is that intentionally killing a preborn child is never medically necessary to save the health or life of the mother.

Reid’s guest on the show was opinion writer Jennifer Rubin (author of an article claiming Republicans have an “indifference to human life”), who claimed that in the state of Mississippi, women are 75% more likely to die from pregnancy than from a “pre-viability abortion.” However, the CDC does not collect data from Mississippi on the state’s maternal mortality rate. And according to the state itself, out of 26 pregnancy-associated deaths in the state in 2016, 11 were related to pregnancy, 12 were unrelated to pregnancy such as car accidents, and three were undetermined.

In addition, a 2020 report from The Commonwealth Fund revealed that half of recorded maternal deaths actually occur after the baby has been born; 52% of pregnancy-related deaths take place post-pregnancy, 17% take place during delivery, and 31% occur during pregnancy.

Regardless of when pregnancy-related medical complications or deaths occur, killing human beings is not the answer — improved health care and doctor/patient relationships are. Doctors have a history of dismissing the health concerns of women, especially Black women, and this doesn’t change during pregnancy. If a woman’s life is seriously at risk during pregnancy, every attempt should be made to save her life and the life of her child. If ending the pregnancy is the immediate and only solution, preterm delivery should be considered. Preterm delivery is not an abortion, and neither is surgery for an ectopic pregnancy. If a woman’s life is in immediate danger, an emergency C-section takes less than an hour, while a later abortion can take days.

But Reid and Rubin didn’t stop there. Rubin also compared pregnancy to organ donation, “Imagine a man who was dragged in off the street and told, ‘You know, you’re an organ match for this wonderful person over here and we’re gonna have you donate a kidney.’ And the person says, ‘But you can’t take my kidney.’ And they say, ‘Oh yes, it’s for a very good reason. We’re gonna take your kidney. You don’t have any right to bodily integrity. You don’t have any right to self-determination.’ That’s the attitude that they have taken towards women.”

The United States government does not force people to donate organs, but it should go without saying that organ donation is not equivalent to pregnancy. A preborn human being is not an organ. She is not a part of her mother’s body. She is her own person with her own unique DNA and her own organs. Her heart began beating just 21 days after fertilization. Actively killing that living and innocent human being is not akin to not donating an organ.

Rubin continued, “As soon as you’re born, you’re on your own in that state and women are on their own throughout pregnancy and in childbirth, they’re on their own. So spare me the talk about being pro-life.”

Reid addressed the fact that Mississippi has the highest infant mortality rate in the nation to claim that pro-lifers don’t care about babies after they are born. But again, the heartbreaking deaths of born babies do not justify the killing of preborn babies through abortion. If babies are dying after birth, the health care system in Mississippi must be addressed. Abortion is not the cure for this, and pro-lifers are not responsible for the poor health care that infants may be receiving.

There is just one abortion facility in Mississippi, but there are at least 40 pregnancy centers spread throughout the state. These centers exist to meet the physical, emotional, and medical needs of women facing unplanned pregnancies. They offer ultrasounds, life and relationship skills, counseling, parenting classes, prenatal classes, maternity clothing, and newborn supplies. The state also has a transitional housing program, assistance for single mothers, and a program for helping pregnant and parenting teenagers.

A recently published state impact report by the Charlotte Lozier Institute (CLI) and Care Net revealed the work that pregnancy centers in the state do to help women and children. These pro-life centers provided nearly $1.9 million in services and material items to families in 2019 alone, not including the services women were referred to, including housing and social agencies. These centers are almost entirely funded by private donations.

Reid and Rubin failed to mention any of this during their attack on pro-lifers. They also didn’t mention that abortion facilities and pro-abortion organizations don’t offer any life-affirming help to women. The only solution they offer for a woman’s financial issues, relationship issues, housing issues, or health issues is abortion.