Dennis Gerber, Jr. feels like the luckiest man in the world — and that, for him, is a terrifying feeling. If it hadn’t been for his birth mother’s strength and determination, he could have lost his life to abortion. He has had a blessed life with loving parents through adoption, but he knows that millions of other people have not been so fortunate.

His story is one full of God’s handiwork.

While Gerber grew up knowing he was adopted, most of what he knew was that he was adopted after his 18-year-old birth mother walked into a hospital in Philadelphia, in premature labor, possibly having not known she was pregnant. She had been adopted herself, and she told the doctors there that she wanted to place her baby with a Catholic adoptive family.

That same day, Gerber’s “uncle” happened to be working as an OB/GYN in that hospital, and his colleague told him about a baby he had just delivered who was being placed for adoption. Family members, who had been struggling with infertility, happened to be visiting him that day.

Gerber told Live Action News that this “uncle” called said, “I have a baby if you’d like to adopt a baby. And before they knew if I was a boy or a girl, healthy or not healthy, they said yes.”

Gerber later learned from his uncle that his birth mother hadn’t held him. “She just couldn’t look at me,” Gerber said. “She was afraid she would get attached.”

Three days later, without telling their own parents (who lived with them) about the baby, the Gerbers pretended to drive to work in their separate cars, before meeting to drive together to the hospital, stopping to buy a baby outfit on the way. They still weren’t convinced that they would actually be adopting a baby. Once the lawyer handed the baby to them and their dream of parenthood was a reality, they called their parents to tell them the good news. On the way home, they had baby Dennis baptized. 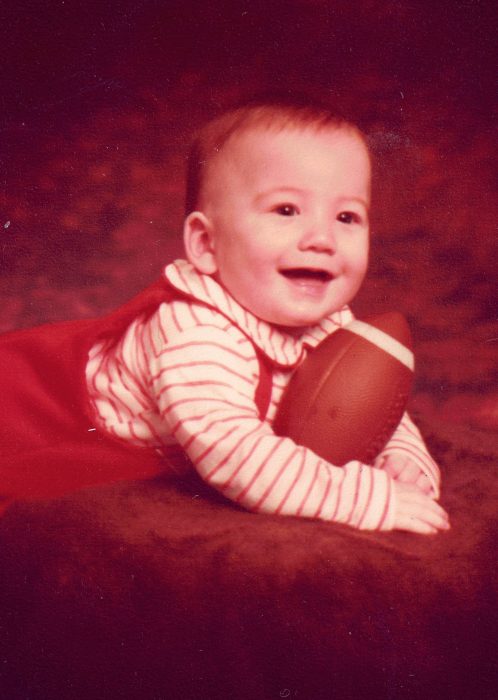 His homecoming was a celebration, as well as a last-minute baby shower. More than 200 friends and family members had gathered to build furniture, paint, and stock the house with diapers, formula, and baby clothes. They lovingly prepared the home for a baby who was unexpected but very much loved.

The new parents raised Gerber — along with the two biological children they later had — with the belief that he was meant to be their son.

“My dad told me something when I was 18: ‘God made you for us. That’s all I could think about. I can’t think about there being anybody else but us.’ And I didn’t really understand it until I was a parent,” Gerber said. “Obviously, you don’t understand these things until you become a parent, but I got the idea that I don’t really need to have a relationship with [my birth mother]. I don’t even know if she wants to have a relationship with me, if whatever she went through to conceive me was traumatizing to her… But I do want to write her a letter to say thank you because she could have aborted me.”

A pro-life message, and a life saved

As Gerber grew up, got married, and began his career, he shared his story as a pro-life testimony with those he knew. Then one day, his story saved a life. While working at a university, an intern told Gerber that she was pregnant, and that she had an abortion scheduled at her boyfriend’s request. She was also worried about graduating on time and thought her parents would kick her out — but she had heard Gerber’s adoption story and wanted to talk with him.

“I told her ‘One: Babies are never a bad thing. Babies make life better. Always. There’s no bad baby. And two: If your boyfriend is telling you to have an abortion because he doesn’t want to have to help provide for a baby, he doesn’t love you. And three: If your parents are going to kick you out, you can come live with my wife and I,'” Gerber recalled. “And then she didn’t go to the appointment. And now her baby’s going to be 14 this year. Her parents took her in, loved her, great grandparents.”

He added, “For all those times I would ever tell [my] story, that made it worth it.” 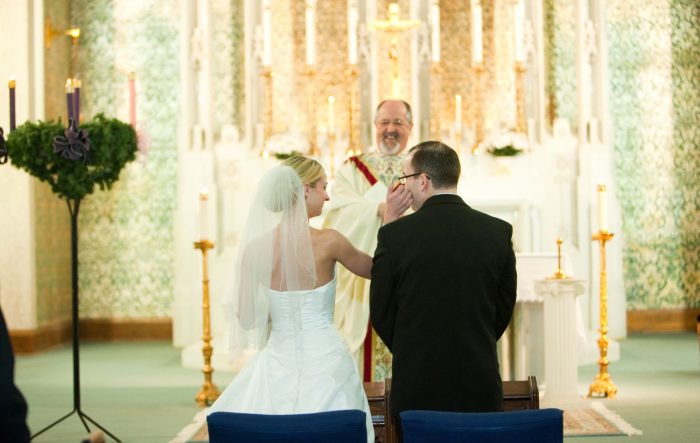 Gerber and his wife at their wedding. ©Dennis Gerber

A life had been saved from abortion, but Gerber still hadn’t had the opportunity to thank his own birth mother for sparing him from such a fate. His mother-in-law had purchased Gerber a DNA test kit, thinking it would be good to know his cultural background, and he suddenly had connections to biological relatives he had never had before. But since his birth mother had also been adopted, the search and the connections were difficult to maneuver.

Then his wife, Elise, became pregnant with their first child, and everything changed.

“It didn’t hit me until [my daughter] was born that she’s the first person I met that looked like me or shared blood with me,” he said, adding, “I had my family. I love my family unconditionally. My parents are my saviors… They brought me up in a household that made me who I am… but to know that… there’s somebody who’s going to look like me. It’s a weird sensation.”

He added, “And to also know that there’s this woman out there that gave me life, that bore her cross. I don’t know if she didn’t know about me, or if she knew about me and that she hid me. I didn’t know what the situation was at all… She had me. She placed me for adoption. Because of that selfless act, my daughter was born. Because of that selfless act, my wife had her vocation as a wife and as a mother. Then we had two more kids and now… I was crying yesterday because we just got the sonogram for our fourth. This little baby doesn’t know how lucky he or she is.”

In 2017, Gerber learned that Pennsylvania was opening sealed adoption records, and he applied for his original birth certificate. He had recently started the Knights of Columbus Charitable Fund, which works with donors to help them give to organizations that are consistent with the values of the Catholic Church. It works with groups including March for Life, Sisters of Life, and Catholic Near East Welfare Association. The organization was new, and Gerber was still working out of coffee shops when on December 17, 2017, Elise called to tell him that his birth certificate had arrived.

“My stomach sank and I just drove home,” he said. “And on my way home I’m thinking, this is the woman that I’ve been praying for my entire life… This is the name of the woman who saved me.”

When he opened the envelope, he saw her name: Nancy. Then he noticed the birth father line was empty. He had never thought about the fact that he had a birth father until he saw that blank space.

He said, “I did what any millennial would do, which is — Googled her name. I found a Facebook page. […] I saw her face and she was beautiful. And she’s amazing. It was really amazing to just know her name. She looked happy from what I could see. She was married. I sat down and said to my wife, ‘I guess I’m going to write this letter to her.'”

In that letter, he told Nancy, “For as long as I can remember, I’ve always wanted to just say ‘Thank you’ to my birth mother for the choice that she made. I’ve been so blessed by my adopted family and now have a loving family of my own. Three little girls and a beautiful wife who keeps me grounded. I could never have asked for more.”

He sent the message and waited anxiously. The next morning, he read the first words sent from his birth mother, and began crying. A series of messages flew between birth mother and son until they decided to speak by phone. They talked for hours about the different aspects of their lives, from their favorite colors to what led her to place him for adoption. 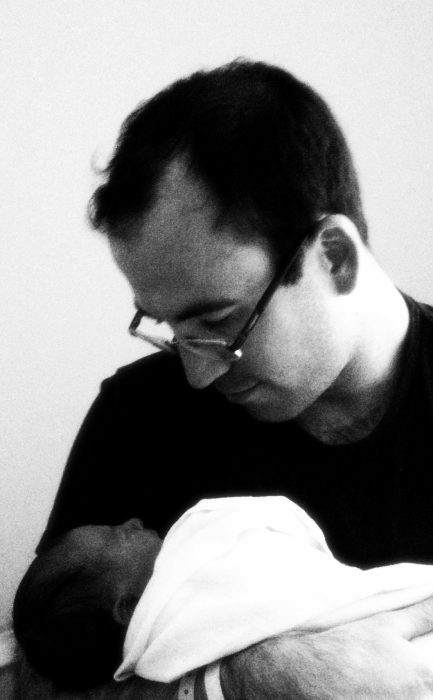 She had known she was pregnant, but when she told Gerber’s birth father, he told her to have an abortion, because he had just had a baby that very month with another woman. He was paying child support, and didn’t want to tell his parents that there was now another baby that he had to support.

But the joy of finally being able to thank his birth mother was dampened by the knowledge that his birth father, Paul, had wanted to have him aborted.

“This boy said, ‘I don’t want to pay more money. You should abort that baby.’ And how easy is it for somebody to say ok?” Gerber said. “…We men can be selfish about these things and not think about anything else but ourselves. And I don’t think that gets pointed to enough.“

Nancy had planned to place her baby for adoption through Catholic Charities, but, said Gerber, she was “a procrastinator like me,” and her baby was born a month early — at the right place and right time to be adopted by his parents.

“Everything goes back and fortifies what my father said: ‘God made you for us.’ I came a month early. My parents just happened to be in Philadelphia at this time. My uncle just happened to be in a break room hearing about me at the right time. All these things all came together to really drive the point home that God made me for my parents and that both scares me and makes me feel like the luckiest guy in the world,” he said, adding that every child deserves to be loved and welcomed in life. “I don’t deserve that over those 62 million [aborted] babies… I shouldn’t be more blessed than them.”

Despite the pain of knowing his birth father Paul had instructed Nancy to have an abortion, Gerber reached out to Paul and to his half-siblings. His father shared his regret at having suggested abortion, and Gerber has forgiven him.

Gerber is Nancy’s only child. She was able to meet her grandchildren — Gerber’s three daughters — over FaceTime (ages five, four, and an infant at the time). Eventually, they met in person, when Nancy was able to hold her son for the first time.

Now, five years later, Gerber and Nancy text every day, and have visited several times in person. He’s met his large extended family, and they all felt comfortable together from the beginning.

“What a blessing,” he said. “Our whole family just grew. […] It’s just multiplied grace… Her one decision has created this ridiculously large family. My kids have three grandmas and three grandpas and I have two moms and my wife has two mothers-in-law and it’s not weird. Holidays are a lot of fun. We have all these different things to do. It’s more than I ever thought it could be.”