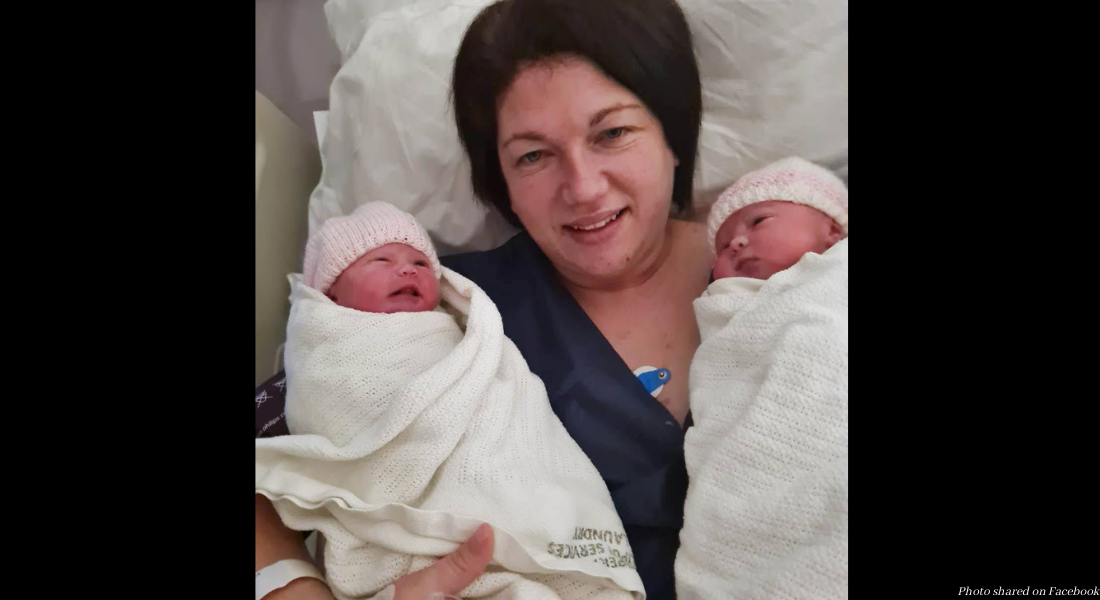 A woman who was pregnant when she contracted COVID-19 has given birth to healthy twin girls after doctors told her partner that it would be “highly unlikely” the babies would survive.

According to Fox News, Danielle Martin of Ireland was nine weeks pregnant with what she and partner Bryan Green thought was one baby. On March 30, 2020, she began to feel as though she couldn’t breathe. She was taken to a local hospital where she tested positive for COVID-19, and her health began to deteriorate.

“At first, I thought I just had a sore throat which led to a bad chest and I thought it must be a chest infection but I could barely breathe after six days,” she told SWNS. “It felt like I was suffocating so Bryan decided to call an ambulance who came within five minutes and took me away — I was terrified.”

At the hospital, Martin was placed into a medically induced coma. Green, who also shares three sons with Martin, said he was “just speechless” when he heard she had been put into a coma. Doctors then told him it was “highly unlikely” that the baby would survive.

Ten days later, Martin came out of the coma and learned that not only did her baby survive, but she was expecting two babies. “I couldn’t believe it and I still can’t to this day, even though I’m looking at them in front of me right now sleeping, It’s unbelievable!” she told The Sun.

Green was equally surprised. “The doctors rang me to say she was out of the coma and being moved to the ward which was amazing, it was such a relief,” he said. “I got to speak to her on the phone and asked her about our baby straight away but nothing prepared me for when she said there’s two babies in there! I said don’t joke with me right now and she said, no Bryan, I’m serious, there’s two babies!”

Earlier this month, Martin gave birth to Ava and Amelia, and the entire family is now home together. “It’s definitely a miracle for us,” said Green. “They’re our wee princesses. We’ve got three boys and two girls now — it’s going to be a mad house. I’m loving having the girls home even though I haven’t been sleeping because I can’t stop staring at them!”

Around the world, women have been beating the odds when it comes to COVID-19 pregnancies. Earlier this summer, Maggie Sillero delivered triplets in Texas after receiving a COVID-19 diagnosis. Another mom, Adriana Rice-Leiva, struggled to survive COVID-19 during her pregnancy, even giving birth while in a coma.