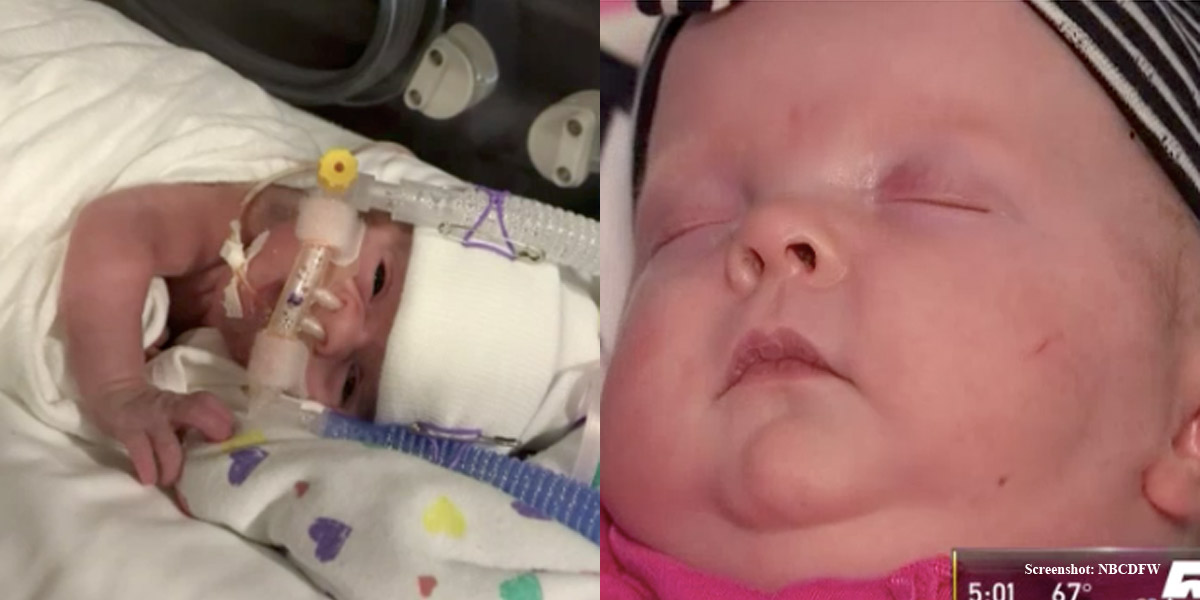 Pearly Jo (“PJ”) was born at 23 weeks gestation, weighing just 1.1 pounds, and was considered a “micro-preemie,” and is the youngest baby to survive at Baylor Scott and White Medical Center in McKinney, Texas. But she proved she was a fighter when she let out “three huge cries” as she was born, according to her mother, shocking everyone in the delivery room.

Born on Independence Day 2018, the tiny girl named after her great-grandmother amazingly never got an infection and never had to have surgery, though she did experience a brain bleed, something not uncommon among extremely premature babies. Now she’s going home at a wonderfully healthy nine pounds.

Pearly Jo spent 136 days in the NICU at Baylor Scott and White Medical Center in McKinney, Texas, with her mother, Tisha Calhoun, driving 100 miles roundtrip every day to be with her. Calhoun suffered a miscarriage prior to becoming pregnant with Pearly Jo, and says she was desperate for a baby for years. “For years after our first miscarriage I would lay my head on AJ’s shoulder every night and cry and say, ‘When will we have a baby?'” Calhoun said.

Babies born as early as Pearly Jo have about a 37 percent survival rate, and only 15 percent of micro-preemies are released without major health issues, so she is definitely a ‘miracle’ baby. However, thanks to technological and medical advances, more babies are surviving at earlier gestational ages. According to NBCDFW.com:

On the 23-week spectrum, [Pearly Jo] is on the highest end. Hospital staff credit medical advancements, family-centered care like delayed cord clamping and skin-to-skin bonding, as well as her parent’s dedication.