Early in January, SeaWorld lost its most famous modern orca, Tilikum. People soon took to social media to express their condolences regarding the death of the beloved animal. 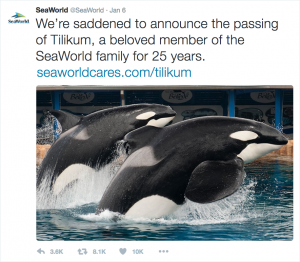 As a Millennial someone who cares deeply about animals, it’s sad to hear about the death of a killer whale who lived most of his life in captivity for entertainment purposes. Taken from the wild at a very young age, Tilikum was acquired by SeaWorld 25 years ago. He lived the majority of his life basically in a giant bathtub, away from the rest of his family in the wild. Over those years, Tilikum was responsible for the deaths of three people, two of them being trainers.

I think it’s safe to say any animal – or person for that matter – locked up in a confined space for a long period of time would go crazy. It’s abuse.

So it’s understandable that the public would be mourning Tilikum’s death. I get it; I’ve been a vegetarian for 23 years now. But at what point do we as a society realize what else has been going on during Tilikum’s lifetime and during the entirety of many Millennials’ lifetimes? When do we step back and come to the realization that many times we put more energy into mourning over the death of animals than we do the death of preborn human children?

It’s time for a cultural evaluation.

Before I suggest my proposition for a cultural revolution, let’s take a look at how we got to this point in our society; that animal lives are somehow more valuable than human lives, specifically the lives of preborn children. The sexual revolution is a good place to start.

The sexual revolution was a time in history from the 1960s to the 1980s when rationalizing just about anything meant that social practices not accepted in the past were now morally okay, no matter the reasons or circumstances. As humans, it’s easy for us to justify anything, even when it can hurt people — the often dismissive use of birth control (which can often be abortifacient), abortion on demand, etc. Justification can lead to blindness. Blindness can lead to deception.

During the 60s and 70s, a woman’s potential right to kill her baby was also being considered.

On January 22, 1973, our nation’s highest court rationalized the idea that a woman could have the right to choose life or death for her preborn child, ruling 7-2 in favor of abortion throughout the nation. What was the Supreme Court’s reasoning or lack thereof? Griswold v. Connecticut; the case that said the American people have a right to privacy. But the justification didn’t stop there. According to Oyez, Roe v. Wade “gave a woman total autonomy over the pregnancy during the first trimester and defined different levels of state interest for the second and third trimesters.” But how can a mother have total autonomy over her pregnancy when another human life is involved? It’s not rational to think that one human has complete control over another human, but somehow the Supreme Court made it so.

Taking this discussion back to animals, in the United States it is illegal to basically do anything with bald or golden eagles. This includes the selling, purchasing, and exportation of eagles, to name a few restrictions. The law protecting these animals is the Bald and Golden Eagle Protection Act, which was enacted in 1940. Skip ahead 30 years, and we see an updated version of the Act.

In 1972, around the same time the landmark case Roe v. Wade was decided, an increased penalty for violating the Bald and Golden Eagle Protection Act was instituted. That penalty includes “a maximum fine of $5,000 or one year imprisonment with $10,000 or not more than two years in prison for a second conviction. Felony convictions carry a maximum fine of $250,000 or two years of imprisonment. The fine doubles for an organization. Rewards are provided for information leading to arrest and conviction for violation of the Act.”

Now, what does the Bald and Golden Eagle Protection Act have to do with the sexual revolution? In an article for Public Discourse, Ligia De Jesus Castaldi writes, “[…] abortion rights dogma can obscure human reason and harden the human heart so much that the same person who feels empathy for animal suffering can lack compassion for unborn children who experience lethal violence and excruciating pain in abortion.” (See the video below, made by a former abortionist, if you doubt that abortion involves violence or pain.)

It’s because of the sexual revolution – this relativistic way of thinking – that our views on the sanctity of human life drastically changed. Abortion was justified, and a major shift in the way we viewed the dignity of human life was in the works. The protection of the preborn and their rights decreased while the protection of animals and their rights increased. Justification can lead to blindness. Blindness can lead to deception.

Here is my proposition to our societal culture: Let’s use the energy we put into animal activism — without losing that care and compassion — and incorporate that same time and energy into pro-life activism. My guess is that if our efforts to save the abused and neglected animals were invested in saving the millions of preborn children lost to abortion every year, within a month, abortion would be unthinkable.