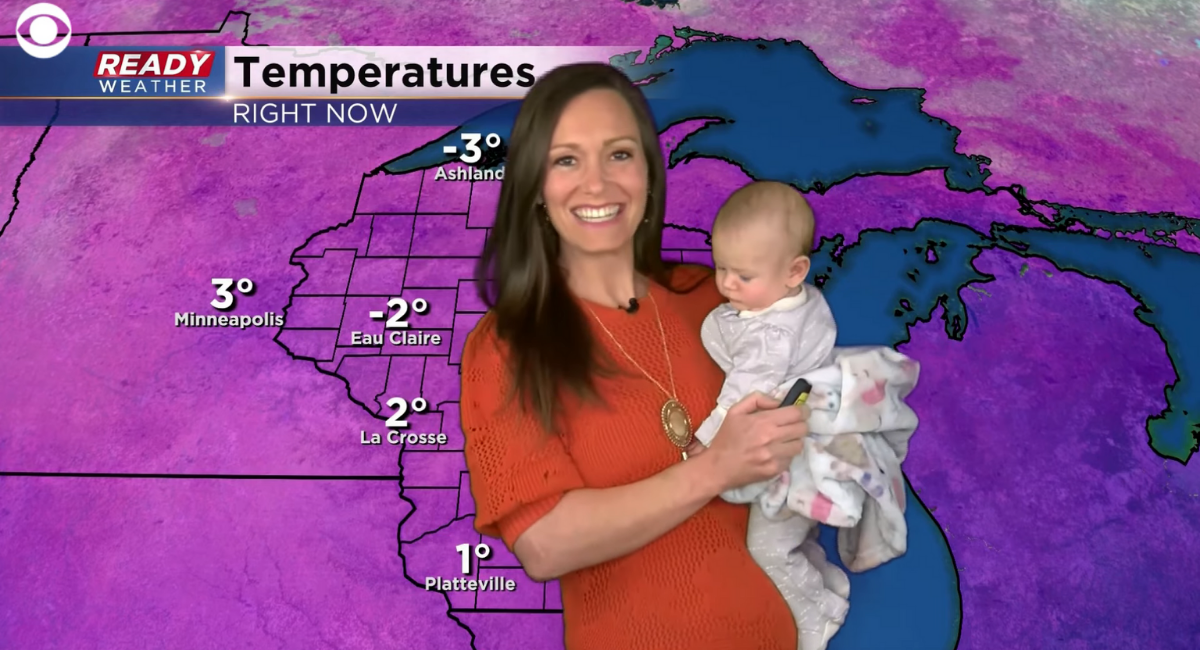 Meteorologist Rebecca Schuld of Wisconsin has been working from home amid the COVID-19 pandemic, with a green screen set up in her basement where she is able to go live to report the weather to viewers of CBS 58. Recently, as she prepared to go on-air, her 13-week-old daughter Fiona woke up from her nap and made her television debut.

Schuld told Yahoo Life that it was actually her producer’s idea to bring Fiona on camera with her. “I was just minutes away from having my next weather broadcast, and my baby had just woken up,” says Schuld, who had just returned from being on maternity leave. “I go over to my greenwall. I’m holding her and our producer is like, ‘Oh, your baby, is she gonna make an appearance?’ I was very confident she was going to behave because she just took a long nap so I knew she’d be happy. I said, ‘sure!’”

It turned out that co-workers and viewers alike enjoyed seeing baby Fiona on their television screens. “Crazy amounts of cute during this @cbs58weather forecast on @CBS58!” tweeted Nicole Koglin who works at the station. “She’s beautiful @RebeccaSchuld. #WorkingMom #WorkingFromHome #RealLife”

Viewer Jon Keiser tweeted, “I think it was fantastic that you were able to be with Baby Fiona. It says a lot about your station being progressive as it should be in todays world.”

Viewer Jennifer Fox tweeted, “As working moms, let’s stop pretending that it’s clear skies all of the time. Kudos to @CBS58 and @RebeccaSchuld for spotlighting real work life balance with a baby on the hip.”

As working moms, let’s stop pretending that it’s clear skies all of the time. Kudos to @CBS58 and @RebeccaSchuld for spotlighting real work life balance with a baby on the hip. @CBSSunday @CBSMornings https://t.co/03fvQrS1F1

Though people celebrated seeing a baby onscreen, Schuld was initially feeling guilty about it.

“We’re supposed to put on this certain face,” she said of being in the public eye. “For a split second, I felt guilty about it and I don’t know why. When I sat and thought about it, it’s like, why am I guilty? This is real life. This is what everyone else is also doing. They work, their kids are sick, or their kids are crying in the background. It’s always a challenge when you have kids in the mix, but that’s what so many of us are doing everyday. So why are we hiding them?”

READ: A new mom had to return to work when her baby was 12 days old. Then strangers showed up in a big way.

As the mother-daughter duo went on-air, Schuld told the audience, “She’s prepared. She’s got one of her good thick blankies here for that cold weather that’s coming tonight. I thought she could help me with tonight’s first weather that’s going to be plenty unpleasant, right?”

Schuld called it “an absolute privilege” to be able to work at home with her baby. “I’m able to multitask and still care for her and be there in her life,” she said. “Some countries have maternity leave for a couple of years, so you’re really able to bond with the baby and help raise them instead of, you know, putting them into daycare and then missing milestones. She giggles now in the last couple of weeks. She is cooing and all these things that now I had been able to see because I’m here with her. That’s the best part.”

“Why not work from home if we can utilize technology?” she added. “Why do we have to be in the office? We’ve got everything here at home. We’re doing the same work. And we’re able to have a more enriched family life so to me it’s the best of both worlds.”

Like Schuld, meteorologist Erin Moran had her baby join her for a weather broadcast for CBS 11 while working from home during the pandemic. COVID-19 has upset the work and home life balance that so many parents were already struggling with and helped change the way working mothers are viewed. Instead of being forced to choose between career and motherhood, women can do both successfully when given support.