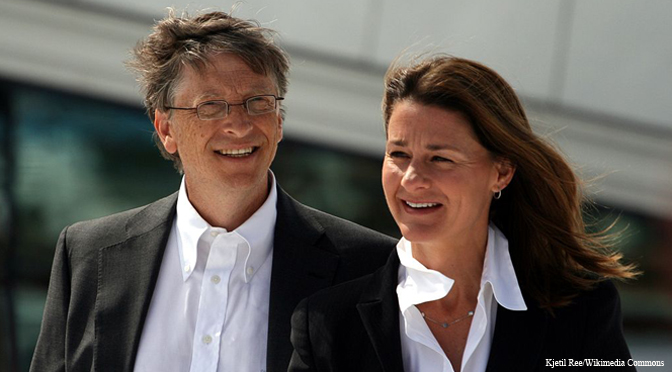 Melinda Gates has long made it her mission to prevent unwanted childbirth around the world, particularly in developing countries. She recently spoke at the IMF and World Bank’s 2017 Annual Spring Meetings, where she continued to advocate for widespread contraception and family planning, vowing to spend hundreds of millions of dollars over the next four years.

Calling contraceptives “one of the greatest anti-poverty innovations the world has ever known,” Gates promised that the Bill and Melinda Gates Foundation would spend $375 million over the next four years on such initiatives. “Contraceptives empower women. And we know what empowered women do,” she said. “They transform societies.”

On her official Facebook page, Gates also shared a video of two sisters in Indonesia, one of whom wanted to be sterilized after having a third child, and another who received an IUD. One of the sisters felt obligated to quit her job after she became pregnant with her third; the other sister explained that seeing her sister’s difficulties with work and child-rearing was what encouraged her to want to avoid pregnancy so much. Both sisters spoke about issues like managing finances and maintaining independence as reasons for avoiding more children. The inference is clearly that contraceptives and family planning solve all of the problems these two sisters are having.

Being able to avoid pregnancy when it isn’t wanted is not, in and of itself, a bad thing. But there are still numerous issues with Gates’ video and her insistence that all women need to “transform societies” is contraceptives and family planning.

It’s worth pointing out that, above all else, contraceptives don’t actually solve any of the problems these women are facing. In many cases, women are still forced to choose between their children and their careers, and many women still live in poverty. Melinda Gates could be working to help address those issues; she could be helping to institute affordable day cares for women in developing countries, give them job opportunities, or advocate for better maternity leave. Instead, she tells them that not having children is what will “fix” everything, and meanwhile, the anti-woman state of affairs continues on as usual.

Some have argued that this is nothing more than a form of both colonialism and racism, with a bias against poor people living in African and Asian countries. Rather than trying to improve the lives of these women, Gates is instead trying to prevent them from having children, a mindset that should give most people pause. It should be noted that efforts to prevent childbirth are not always appreciated by people in such countries.

Uju Ekeocha is a biomedical scientist and the founder of Culture of Life Africa, a U.K.-based pro-life group, and she frequently speaks out against wealthy countries and organizations funneling money into poor African countries to promote abortion. “In all my work with African countries, I don’t know of any which is screaming, ‘Come and help us, we have this abortion crisis,'” she said. “But a lot of Western countries, in this spirit of cultural supremacy, are still trying to impose abortion in this way.” It’s a sentiment echoed by Dr. Anthony Cole, chairman of the Medical Ethics Alliance.

“The real need of women and their babies is for safer obstetrics, especially in developing countries,” Cole said. “The constant call for more contraception and, where that fails, abortion … makes no significant contribution to providing safe care during pregnancy and delivery. The real need worldwide is for trained birth attendants supported by midwives and obstetricians.”

Ekeocha spoke out during the Family Planning Summit in London, co-hosted by the British government alongside the Bill & Melinda Gates Foundation and the U.N. Population Fund. (It was at this summit that Gates made her remarks about contraceptives and family planning “empowering” women.) “They need to go back to the integral care of the person, where they were thinking of the Africans not as people who they can colonize culturally and impose their new views and values on them, but as a people who have their own views and values,” Ekeocha explained. “What Africans want more than anything is for women to give birth safely… in a lot of these countries they can’t even get the most basic health care.”

But Melinda Gates isn’t advocating for abortion, some might claim. She’s talking about greater access to contraceptives — but is she?

The reality is that the Bill and Melinda Gates Foundation does, in fact, fund pro-abortion groups, and the foundation has allied itself with organizations that are directly involved not only in abortion, but in coercion. The U.N. Population Fund, for example, helped set up China’s one-child policy, which led to countless forced abortions. The foundation has also given millions to the International Planned Parenthood Federation and Marie Stopes International, both abortion providers, with much of the giving focused on countries in Africa, Asia, and Central America. Conferences hosted by the foundation have also frequently revolved around abortion and promoting access to it in developing countries. In addition to promoting a pro-abortion agenda, the Gates Foundation is also known to promote abortifacients.

For Melinda Gates to promote contraceptives and abortion as the end-all, be-all to cure all of women’s ills, particularly in developing countries, is misguided at absolute best. It’s not empowerment to keep women in the same dead-end situations while also telling them that their lives will be better as long as they don’t reproduce. Women deserve more than that. They shouldn’t have to choose between having a family and having a future.

Editor’s Note: All op-eds are the opinion of the writer, and not necessarily the official position of Live Action. For facts and a discussion on how some forms of birth control can act as an abortifacient, see this article by a former Planned Parenthood director.