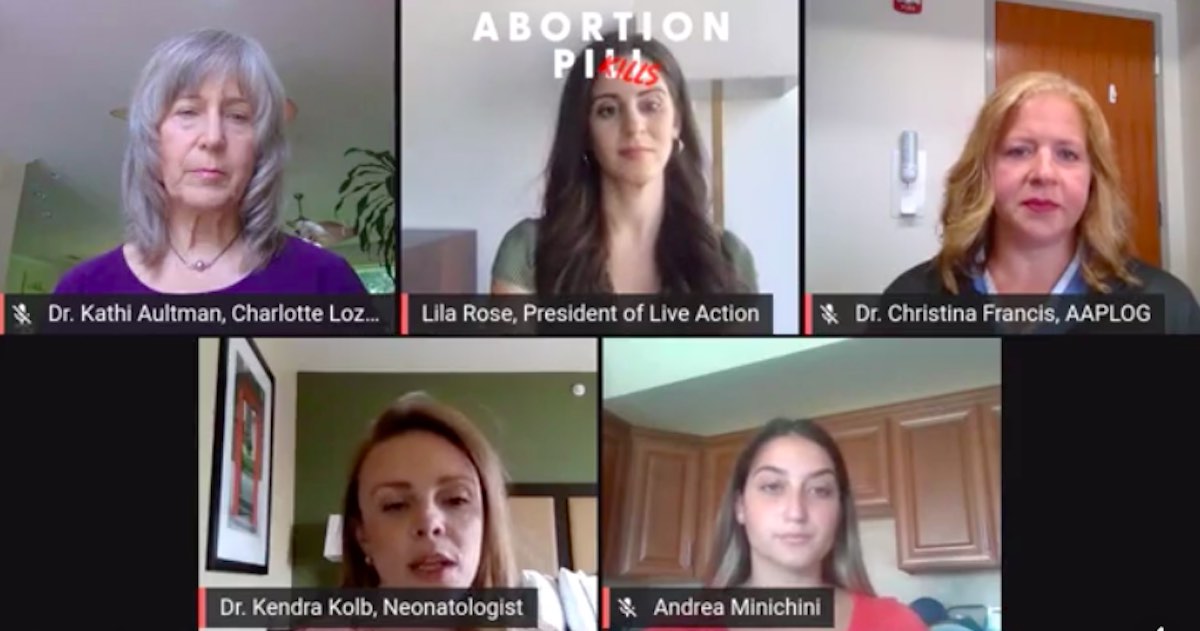 Dr. Kendra Kolb, a neonatologist, pointed to embryology textbooks to show how scientists and doctors are very aware that life begins at fertilization, with all of the genetic makeup of a unique human being present. Each person’s hair color, eye color, sex, and even height potential are already determined at that moment. Just as the other stages of life are labeled newborn, toddler, teenager, and adult, the words “embryo” and “fetus” are nothing more than names placed on stages of human life and development. Human development does not stop at birth; it simply continues outside the womb.

How the abortion pill works

Dr. Christine Francis, an OB/GYN and chair of the American Association of Pro-life Obstetricians and Gynecologists, spoke of how the abortion pill works to end the life of human beings in the earliest stages of development.

“[…] Mifepristone or RU-486 blocks the action of progesterone, essentially cutting off essential nutrients to that baby and so starving that baby and leading to the baby’s death,” she told Rose. “And then 24 to 48 hours after the woman has taken mifepristone [… she takes] misoprostol which induces contractions of the uterus to expel the dead baby.”

Francis explained that women are often unprepared for what happens after taking the abortion but they will experience “significant bleeding” and “excruciating pain” similar to labor. They may also be able to see their deceased baby in the gestational sac, causing many women emotional trauma.

Women face considerable risks, as the abortion pill is four times as dangerous as surgical abortion. Those risks include incomplete abortion, extremely heavy bleeding, and infection that can lead to death. Despite this, a federal judge recently ruled that during the COVID-19 pandemic, the abortion pill can be distributed to women without visiting a doctor or other medical professional. This leaves women at even greater risk for complications due to potentially inaccurate pregnancy dating and a lack of evaluation for ectopic pregnancy, which can cause death.

Dr. Kathi Aultman of the Charlotte Lozier Institute, a former abortionist, told Rose that by eliminating the FDA’s REMS safeguards—which state that women must see a doctor before taking the abortion pill—opens the door to causing major complications for women. She said the push to expand the abortion pill is how the abortion industry aims to make a profit as abortion numbers continue to decline in the U.S.

“This is the way that [abortion businesses] can charge for the [abortion pill] and not have to have a facility — not to have as many facilities — and just to make abortion more ubiquitous,” she explained.

Andrea Minichini took the first pill of the two-dose abortion pill regimen and told Rose it was an experience that she “wouldn’t want anyone to experience.”

“It was just so cold and, like you had said, they lie to you. They push you,” she explained. “[…] And I’m sitting there and I’m just kind of like waiting for [the nurse] to be like, ‘Are you sure you want to do this?’ […] But they’re on a timeline. They want to push you. So she’s very quick because they know, ‘OK, maybe at any point she can change her mind and walk out of here.'”

Minichini told Rose that the nurse told her not to worry about any bleeding or other complications that could and would occur and the abortionist forcibly told her to take the abortion pill when she hesitated. Minichini did take the first pill, but quickly regretted it and was thankfully able to reverse her abortion after calling the Abortion Pill Rescue Hotline at 877-558-0333.