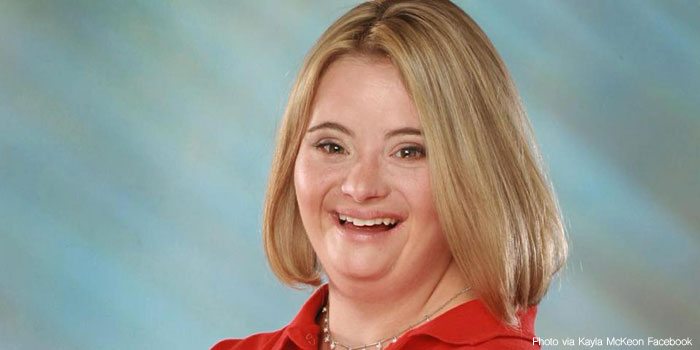 Kayla McKeon has such confidence that when she meets someone, she always leaves quite an impression. Her mother, Patti, recently told the Washington Post, “She’s never nervous. When she gives a speech to a big crowd, I’m a wreck, and she’s calm as can be. She doesn’t care who she is speaking to, it’s like she’s talking to her best friend. That’s a real strength when you’re talking to members of Congress.”

Kayla, age 30, is the first registered lobbyist with Down syndrome, and she’s been lobbying Congress part-time for the National Down Syndrome Society (NDSS) since October 2017. According to the Washington Post, Kayla “is also taking classes toward her associate degree at Onondaga Community College in central New York.” She was recruited for her job as a lobbyist by Sara Hart Weir, the president and chief executive of NDSS, who knew when she met Kayla that she was something really special.

READ: Love children with Down syndrome ‘for who they are,’ says woman with condition

Weir told the Post, “I wanted to put somebody on staff like Kayla who would influence members of Congress. Kayla is one of the most impressive young, vibrant individuals with Down syndrome I have ever met. She’s spunky, she doesn’t take no for an answer, and she’s quite charming. She has all the characteristics of an exceptional lobbyist.”

Kayla’s job is to advocate for the inclusion of persons with disabilities in the workplace. And obviously, she is a shining example of the fact that those with disabilities can excel at whatever they put their minds to, even in high pressure workplaces like Capitol Hill. The BBC video above notes that Kayla’s work “helped pass the Able to Work Act,” which allowed people with disabilities to keep both their savings and their free healthcare.

McKeon’s mother said she thinks her daughter operates fluidly in the workplace in part because she always was in mainstream schools as a child. She had an aide with her to help her through the school day, but she insisted on being with non-disabled kids rather than in a different school.

“She’s always been a hard worker and also very stubborn, and I think that’s what’s gotten her to where she is today,” Patti McKeon said.

Kayla travels independently from Syracuse, New York, to Washington, D.C., for her job.

She recently got her driver’s license, and she has competed in the World Games and Special Olympics, even giving speeches for the latter. On her blog, Kayla wrote earlier this year, “We can do whatever we set our minds to, we can drive a car, go to college and pursue meaningful careers. We are more alike than different, so lets go and show our awareness of Down Syndrome and celebrate our abilities not our disabilities.” Kayla told the Washington Post that she believes she’s “making a huge difference” for people with disabilities, and “making history.”

And, indeed, she is. But perhaps more importantly than making history, she’s paving the way for future generations — even those yet to be born — so long as they are allowed to be born in a world that has grown increasingly hostile to persons with disabilities.

Kayla told the BBC, “Being a lobbyist on Capitol Hill, I don’t realize how many lives I touch. This is why I love being a role model for others.” She stated in another video interview that she has “a passion for public speaking.”

Kayla’s mother told the Washington Post, “Things are changing, things are getting better for people with Down syndrome. Kayla is a tip of the iceberg. It will be a common thing someday.”

Kayla’s mother is correct. It’s already becoming more common, as we’ve seen in the cases of Blake Pyron, the first Texas business owner with Down syndrome; Charlotte Fien, a United Nations speaker; Sara Pickard, one of “Wales’ most inspirational women”; Ryan LaFave, a volunteer firefighter; and many others.

People with Down syndrome and other disabilities are worthy of life and capable of so much more than the world gives them credit for. Instead of seeking to eradicate those who are different, society would be better off embracing them for who they are.

People like Kayla McKeon are proving every day that people with disabilities can do extraordinary things. They deserve to have every opportunity and chance at life.