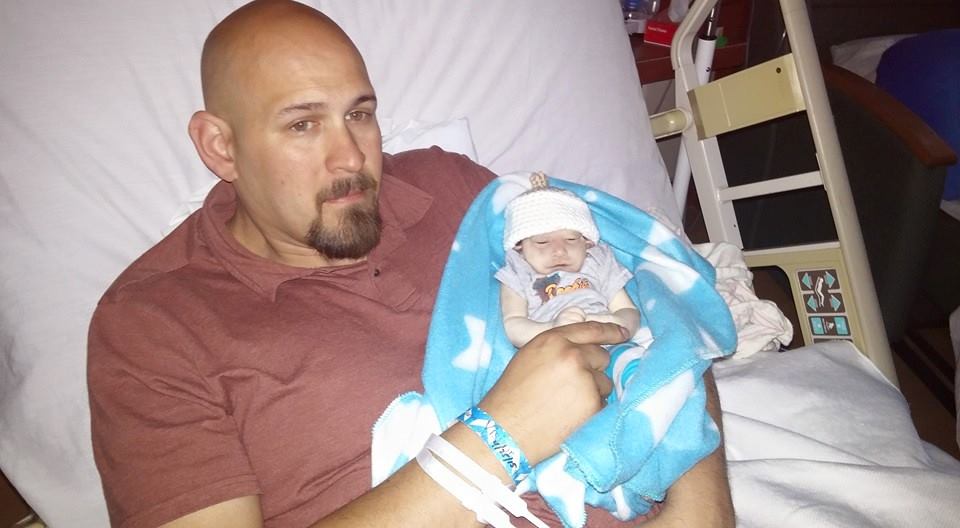 Christopher and Eli shortly after birth.

On April 25, 2015, Christina and Shawn Byrum welcomed their twin sons into the world via emergency C-section at 34 weeks gestation. Eli was born weighing 4 pounds, 6 ounces; Christopher, who had been diagnosed with anencephaly while in the womb, weighed 3 pounds, 2 ounces.

“The day of delivery, all I can say is God definitely granted me the peace that surpasses understanding,” said Christina Byrum. “His supernatural power gave me the strength to walk into the operating room and lay on the table, not knowing if either of my boys were going to make it safely through the delivery process. I was blessed to see them both on the sonogram machine right before delivery. […] Knowing they were both alive and weren’t experiencing any distress gave me hope that they would both be born alive. God granted me that wish.”

The Byrums knew that due to anencephaly, Christopher could die before birth. They were hoping to have as much time with him as possible, and were blessed with 90 minutes to spend with him before he died. During that time, they were able to get photos of the boys together. The family, including grandparents, aunts, uncles, and seven older siblings, were able to meet Christopher and spend time with him before he passed. Although Christopher was born too small to donate his organs, The Living Legacy Foundation was able to use his body to educate their staff on the procurement and transplant of infant organs.

“Through this procedure the staff was able to develop a specialized pack of surgical implements needed in the recovery and transplant process to aid in the speed and efficiency of the procedure,” explained Christina. Byrum. “To honor Christopher’s gift of education, The Living Legacy Foundation is naming the specialized pack ‘Christopher’s Pack.’”

Afterwards, Christopher’s body was returned to his parents and a NICU nurse broke protocol to bring Eli, who was in the NICU, back to his mother’s room for a brief visit – an act of compassion the family is eternally grateful for, since Christina Byrum was unable to visit the NICU until her anesthesia had worn off. The nursing staff made foot and hand prints of the boys, and the next day the family gathered to say goodbye to Christopher.

“There was a surreal calmness through the whole ordeal,” said Christina Byrum. “We were able to make wonderful, happy memories at a time when most families would be drowning in sorrow. Yes, we were sad but the joy of the gift we had been given in the precious eight months of carrying Christopher, and the 90 minutes of life outside the womb outweighed all the sadness in the 48 hours following his birth.”

Giving Christopher over to the nurses to be prepared for transport to the funeral home was the hardest thing the couple had ever done. And while Christina Byrum was released from the hospital, Eli remained in the NICU for weeks before finally being discharged the day before Mother’s Day.

On June 6, the boys’ due date, the family gathered to celebrate Christopher’s life and to dedicate Eli and his 16-month-old brother, Ashton, to Jesus. The Living Legacy Foundation paid tribute to Christopher, and a nurse from the NICU spoke of how inspirational the Byrum family had been to the hospital staff. Family and friends spoke of how Christopher had changed their lives for the better.

To always keep Christopher close, the family uses an urn that is also a candle holder, which they light in honor of his short but precious life. To keep his memory alive, the family wears and distributes “Donate Life” bracelets to raise awareness for organ donation. They also collect letters and pictures made for Christopher in a bag with his name inscribed on it – a gift from his grandmother. While each day brings its own set of challenges, Christina Byrum says that each of these things “help to soften the edges of our grief and to move forward little by little each day.”