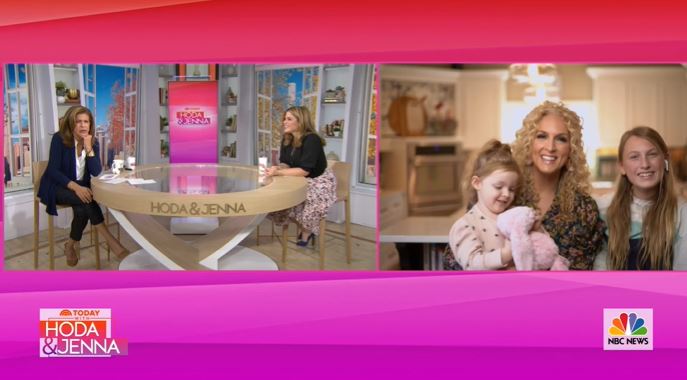 Country singer Kimberly Schlapman of the group Little Big Town has turned her story of infertility and adoption into a newly released children’s book called, “A Dolly For Christmas.” Schlapman — who lost her first husband to a heart attack in 2005 — and her second husband Stephen have two girls, 13-year-old Daisy and nearly four-year-old Dolly, who is adopted.

As much as she and her husband wanted another baby after their older daughter Daisy was born, the couple struggled with infertility. As the years went by and Daisy grew up, she began to ask for a sibling, so the couple looked into adoption. But the wait for a baby can sometimes be a year or longer.

The couple was thrilled and couldn’t wait to bring the baby girl home to join them. When they told Daisy the good news, she couldn’t contain her joy.

Dolly was officially adopted in January 2017 and the sisters have been best friends ever since.

READ: Years ago, she chose open adoption for her baby girl. Today, they have a beautiful relationship.

The new children’s book about Dolly is based on letters that Daisy would write to Santa asking for a sibling. It carries the themes of hope, love, and family, with a foreword written by Daisy. Schlapman’s wish is for the book to bring hope to everyone who reads it, no matter what their situation is, especially in 2020, a year of uncertainty.

She wants parents waiting to adopt to “never ever ever give up, because you never know what’s around the corner.” She explained that they were completely surprised by the call they received about Dolly and were not expecting it.

“I just want people to be hopeful and to know that if they’re in the middle of a struggle, they are not alone,” she told People in March. “We walked those same roads, and they are very, very difficult. But, in the end, there is restoration and there are children who are waiting for them.”