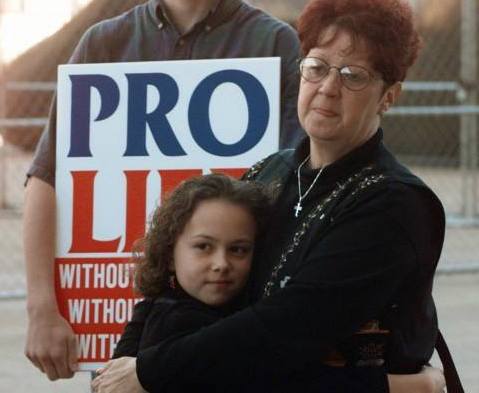 The plaintiff in Roe v. Wade, which struck down pro-life laws and made abortion legal in every state, was Norma McCorvey. Though initially the icon for abortion advocates, she became pro-life in 1995. McCorvey remained active in the pro-life movement until her death on February 8, 2017.

In the early 1970s, McCorvey was pregnant and trying to find an illegal abortionist. Unable to do so, she went to a lawyer to arrange an adoption for her baby. The lawyer, however, was an acquaintance of attorney and pro-abortion activist Sarah Weddington. This acquaintance knew Weddington was looking for a plaintiff to challenge pro-life laws before the Supreme Court and referred McCorvey to her. When McCorvey met Weddington in 1971, abortion was legal in only a few states. Weddington wanted to change that, and she used McCorvey to make Roe v. Wade a reality.

Duped by the Abortion Industry

Sarah Weddington and fellow lawyer Linda Coffee met with McCorvey in a pizza parlor in Texas. McCorvey thought Weddington was going to help her get an illegal abortion. Instead, she talked McCorvey into signing an affidavit under the pseudonym “Jane Roe.” This would be the basis of Roe v. Wade. McCorvey would later say the attorneys “were looking for somebody, anybody, to use to further their own agenda. I was their most willing dupe.”(1)

McCorvey claimed that she had been raped. This claim garnered public sympathy, especially as her lawyers pushed the narrative, but McCorvey admitted years later that it was a lie.

Although I was an emotionally abused child, and a sexually abused teenager, I believe the worst abuse was inflicted by the judicial system. In retrospect, I was exploited by two self-interested attorneys. Worse, the courts, without looking into my true circumstances and taking the time to decide the real impact abortion would have upon women, I feel used me to justify legalization of terminating of the lives of over 35 million [at the time of her statement] babies. Although on an intellectual level I know I was exploited, the responsibility I feel for this tragedy is overwhelming. (2)

Even some pro-choice activists have acknowledged that McCorvey was taken advantage of by Weddington and Coffee. In 1995, pro-choice writer Debbie Nathan called McCorvey “Choice’s sacrificial lamb – a necessary one, perhaps, but a sacrifice even so.” (3)

McCorvey was, thankfully, spared the trauma of abortion. Her baby, a daughter, was born while the case was still being argued. McCorvey placed her child for adoption.

Dumped by the Abortion Industry

After the initial meeting with Weddington and Coffee, the lawyers had no more use for McCorvey. She learned about the Roe v. Wade decision through a newspaper. Upon learning that she was responsible for overturning abortion laws, McCorvey was overwhelmed by guilt. In 2003, years after her pro-life conversion, she describes attempting suicide alone in her home after learning the news:

I sat in the dining room that night and just kept rereading the newspaper story and drinking – drinking and thinking. It made me sad to know that my name, even though it was a pseudonym, would always be connected to the death of children.

McCorvey got a razor and started cutting her wrists.

That didn’t work, so I went out and got as many pills as I could. I took all of them and chased it with a quart of Johnny Walker, thinking I would die, and I would never have to talk to Sarah Weddington or Linda Coffee again. But that was not God’s plan for me. (4)

McCorvey would later come to realize that her own death would just be one more tragedy to add onto the children’s deaths. Years later, she would understand that death was not the real answer to anything.

Before she realized what death and abortion really did to women and children, McCorvey pushed herself to get involved in the pro-abortion movement. But even here, there were times when her role in legalizing abortion bothered her. In one instance, she was at a march when she got into a conversation with another marcher, a young woman. The woman said to her:

“I just think it’s, like, cool – what you’ve done; how you’ve made it possible for me to get my abortions.”

“Abortions?” I said, stressing the word. ”How many have you had?”

I cringed. The girl noticed it, but my act was involuntary. I wasn’t trying to be cruel, but even back then I knew getting an abortion was not like getting a haircut.

“How come you had that many?” I asked. “Didn’t you learn anything after the first time?”

I could understand a woman making one mistake. I could even understand the woman making the same mistake twice. But half-dozen times? I’m sorry. I didn’t have any patience for that.

I had to get away from her. I couldn’t stand there and talk to her anymore. (5) 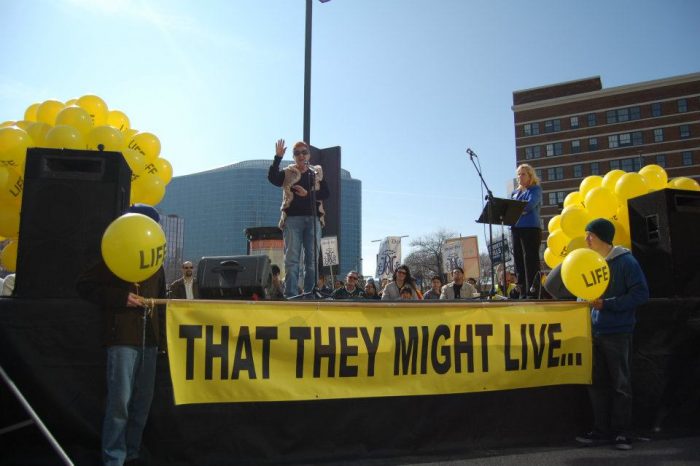 I started working at the A to Z clinic in January 1995, and it was a health disaster waiting to happen. … Light fixtures hung out of the ceiling; falling plaster dusted everyone who walked by…. We fought an ongoing, and losing, battle with the rat population…. Every morning we found rat droppings all over the clinic. Sinks were backed up — in a reputed medical clinic no less — and blood splatters stained the walls.

The “parts room” where we kept the aborted babies was particularly heinous. No one liked to be in there to do their business, much less to clean the place, and since no patients were allowed back there, it was pretty much left to ruin. If a baby didn’t make it into a bucket, that was too bad; it was left to lay there. Other babies were stacked like cordwood once every body part had been accounted for… the room smelled awful… The floor of the clinic invited contamination. It was covered by an old, gold and brown shag rug. At least I think it was gold and brown – no one really knew for sure, since the rug had not been cleaned in a long time.(6)

McCorvey was also troubled by the way abortion workers tried to hide the truth from women — similar to how the whole truth was hid from her during Roe v. Wade. She wrote about one time she got in trouble for telling the truth about abortion to a patient. The woman hesitated to sign the consent form. McCorvey recalls:

I began to make enemies right away, thinking that women should at least get a fighting chance to understand what they were doing. I remember one afternoon in particular. A woman came up to the desk and said, “I am so terribly nervous, I can’t fill out this form.

A patient behind her clicked her gum and said, “Don’t worry about it. It’s just like getting a tooth pulled.”

“Excuse me?” I cut in. Then, to the woman who spoke first, I said, “Sugar, are you sure this is what you want to do? Do you realize where you’re at? This isn’t like visiting the dentist. This is an abortion clinic. If you go back there, they’re going to take your baby away.”

One of the clinic workers sitting behind me began loudly clearing her throat, then said, “Norma. Norma.” I kept talking.

I wasn’t about to be stopped. I was just getting started. “Hasn’t anyone explained to you what’s going to happen?” I asked the client.

I wasn’t surprised. “Let me explain something to you, girlfriend.” I took her outside, ignoring the exclamations of disgust behind me, and explained the procedure, step by step.

The girl’s face became so white I thought she was going to faint. She was horrified.

“Are you sure you know what you’re doing?” I asked. “You’re so young and cute. I don’t want to see you get hurt.”

The girl shook her head. She never responded to my question. She just turned away from the clinic and never came back. (7)

There were other times when McCorvey refused to co-operate:

I was not always cooperative. For example, both Connie [another worker]  and I refused to reassemble the body parts after a late-term abortion. It was bad enough having to seal the bags that held them, but there was no way I was going to treat those bodies like grotesque jigsaw puzzles.

“Norma, Norma,” Arnie [the abortionist] once told me. “I will show you where to put the tissue.”…

I was not a newcomer to abortion clinics at that time, but I was not about to handle the bodies. “Sorry, Arnie,” I said, “I don’t do that. I’ll scrub the floors. I’ll make appointments. But don’t ask me to handle the tissue.”(8)

McCorvey was also asked to do medical tasks that she was not trained for:

Once the patient was settled, we hit her with about 40% nitrous oxide. Though I have received no medical training, I routinely performed this function (as well as other medical acts, such as drawing blood). Most abortionists do not want to spend the money to pay a specialist. (9)

The doctor was determined to make as much money as he could:

[S]ometimes I would feel really ripped off by the doctor. Since I booked the abortions, I knew what he was getting paid for each one, but he bolstered his profits by hiring untrained staff like me for six bucks an hour. (10)

While these things were going on, a pro-life organization purchased the building next door to the abortion facility. McCorvey and the other workers were very upset to find out that the pro-lifers would be their new neighbors.

At first McCorvey fought with the pro-lifers, but some of them reached out to her with compassion. She became friends with one pro-life woman and her seven-year-old daughter, Emily. Emily’s kindness towards Norma and her innocence softened the abortion worker’s heart.

Then she found out that Emily had almost been aborted. Her mother had considered abortion when pregnant with the little girl. This had a profound effect on Norma. She says, “Abortion was no longer an ‘abstract right.’ It had a face now, in a little girl named Emily.” (11) 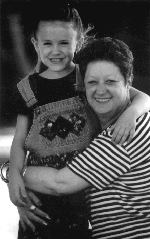 Shortly afterwards, McCorvey accepted the offer of Emily and her mother to go to their church. She had a religious conversion, and finally accepted the truth that, on some level, she already knew: abortion hurts women and kills babies.

McCorvey quit her job at the facility. She later said of her job:

[W]hen you work at an abortion clinic, you’re guilty and you know it. For all the millions spent on public relations, the abortion movement has yet to invent rhetoric powerful enough to blind abortion clinic workers from the truth. You see the body parts, you hear the women’s cries, and you can’t keep lying to yourself – at least not without artificial stimulation.

That’s why drugs, alcohol, and coarse jokes are so popular inside the clinics. If we had stayed sober and not laughed at ourselves, we would’ve begun to think of ourselves as hideous monsters preying on little babies.(12)

Live Action News previously published an article on the macabre jokes abortion workers made to help themselves cope with the grisliness of their job.

Until her death, McCorvey spoke out against abortion and the damage of Roe v. Wade. In a 2003 Chicago Tribune article, she said:

It was my test case that legalized abortion, but January 22 isn’t a celebration to me. I’ve since repudiated my stance on abortion and think Roe v. Wade should be overturned. I’ve worked in four abortion clinics, and I’ve seen firsthand what abortion does to women. Though I had never had an abortion – my child was carried to term and given up for adoption – abortion was the sun around which my life orbited. Now I’m 100% devoted to Jesus and 100% pro-life. No exceptions. No compromise. (13)