Undercover journalists from the Center for Medical Progress — David Daleiden, Sandra Merritt, and others — are currently in the midst of pre-trial hearings. Live Action News has shared some reports of courtroom testimonies since the hearings began last week — such as the CEO of the tissue procurement company StemExpress admitting that her company had harvested “intact” aborted children, potentially leaving the possibility for those children to have been born alive, as “specimens” that have been dosed with feticide are of no use to researchers. Twitter also temporarily blocked CMP’s page because Planned Parenthood claimed CMP was live-streaming the hearings, which was false. In addition, one former Planned Parenthood official seen in the undercover videos admitted that her remarks on video had not been altered.

Then, yesterday, California Attorney General Xavier Becerra’s office asked for the court to place a gag order on any reporting about the hearings. Life Site News reports:

Filed by Attorney General Xavier Becerra and Deputy Attorney General Johnette Jauron, the motion cited a LifeSiteNews article on the testimony of “Doe 12,” the CEO of StemExpress, when it asked for a gag order “to protect the safety of the Does witnesses.” (Read the full motion here.)

The motion also cites the Center for Medical Progress Twitter account for “describing testimony by the Does in an almost live feed.”

The motion asks Judge Christopher Hite, who is presiding over the hearing, to “order the defendants to not reference the victims or any matter which may be taken to identify them or their livelihood in any matter. We request an order to protect the safety of the Does witnesses.”

The order also asks that the court “exercise its discretion to limit the statements the parties may make in public in regards to the witness testimony until after the conclusion of the preliminary hearing.”

Hite had previously ordered that the names of the 14 accusers of Daleiden and Merritt remain sealed during the prosecution, but said all testimony heard in court can be published.

In a post from late last night, CMP noted:

Although the preliminary hearing is public, the AG’s office filed a last-minute motion to place a gag order on the proceedings, falsely and irrationally alleging some kind of link between David Daleiden’s defense of First Amendment civil rights on Tucker Carlson Friday night, and unconfirmed threats reported by Doe 12 on Thursday night. Doe 12’s credibility is already in question since the inconsistencies in her testimony on Thursday.

Then this afternoon, the judge denied the AG’s motion to gag the defendants and their attorneys, according to a tweet from CMP: 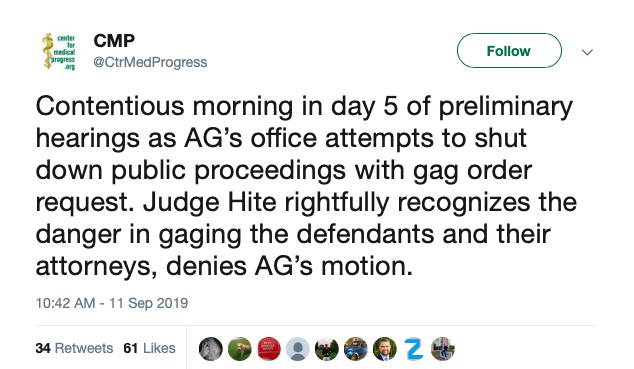 In its statement last night, CMP also noted that the AG’s office “attempted to submit into evidence documents entirely irrelevant to the charges brought against Daleiden and Merritt, such as exhibit booth applications from Maryland and documents from Planned Parenthood in Texas” and “tried to pass off rough draft undercover business cards with Microsoft Word placeholder ‘Lorem Ipsum’ characters as ‘fake identification’ to laughter in the courtroom.” In addition, an agent with the California Department of Justice reportedly “testified that he spoke to Planned Parenthood lawyers about what kind of evidence to collect from David Daleiden’s home, especially Daleiden’s recording devices,” during a 2016 raid ordered by then-Attorney General (now Democratic presidential candidate) Kamala Harris. 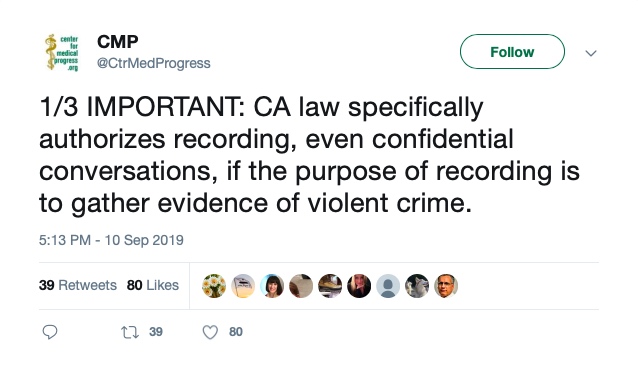 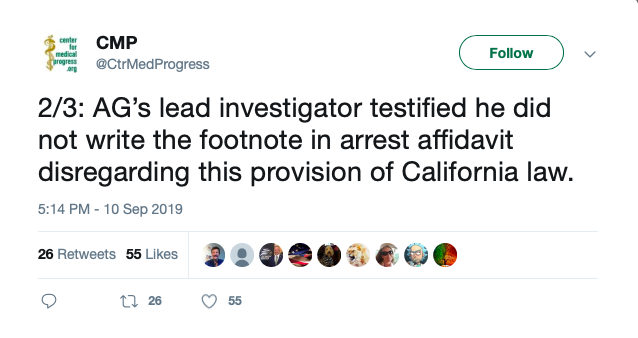 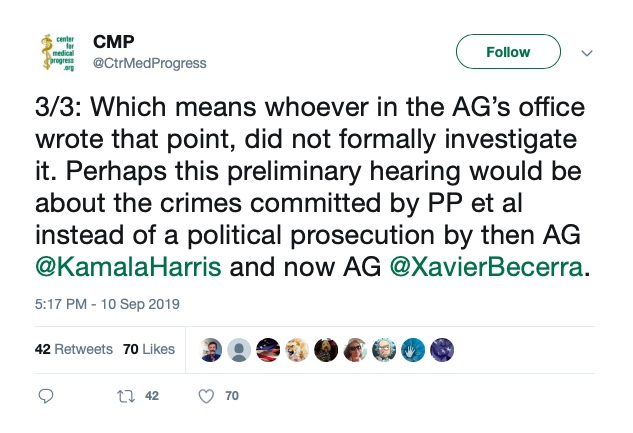 In addition, CA DOJ special agent Brian Cardwell testified yesterday that the suggestion to go after David Daleiden and the Center for Medical Progress came from none other than the Obama administration — U.S. Attorney General Loretta Lynch. Life Site reports:

Cardwell also testified under cross-examination by Brentwood Ferreira, lawyer for Daleiden, that Beth Parker, the chief lawyer for Planned Parenthood in California, urged the Department of Justice agents to seize Daleiden’s documents and recording equipment.

Peter Breen, an attorney representing Daleiden, told Life Site, “We’ve always said it was a political prosecution, but hearing that Loretta Lynch was the one that instigated it, that’s a huge, huge factor.”

CMP calls this a clear example of collusion:

What does @KamalaHarris, @BarackObama's @AGLynch and Planned Parenthood have in common? They colluded against pro-life journalist @daviddaleiden. Read more at @LifeSite: https://t.co/BiR7cg63Jj

Editor’s Note, 9/16 – Clarification: LifeSiteNews notes that “California DOJ special agent Brian Cardwell changed his story in a September 12 testimony,” saying that while on September 10th, he said “the letter was from Obama A-G Loretta Lynch to California A-G Kamala Harris asking for an investigation into the two pr0-life journalists,” he misspoke. “On September 12, he said the letter was from four congresspeople to both Lynch and Harris. See report here,” writes LifeSite.

Read a press release on the denied gag order from Liberty Counsel, which represents defendant Sandra Merritt, here. In addition, a Courthouse News reporter is tweeting about the hearings here.