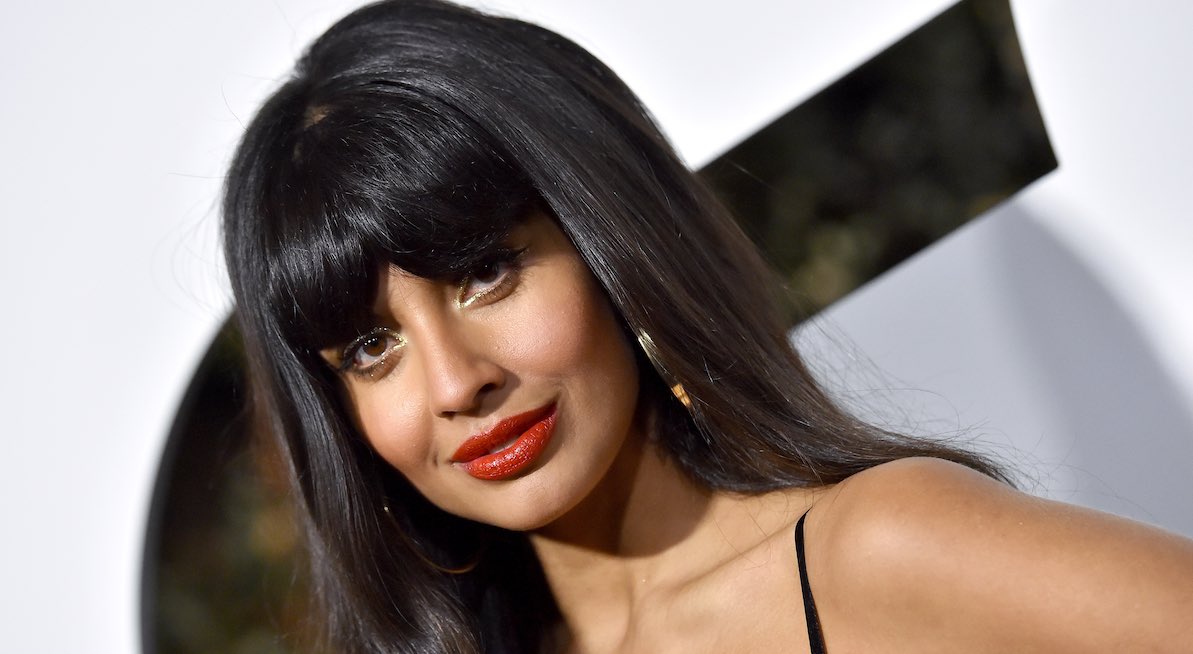 In a now-removed Instagram post, The Good Place actress Jameela Jamil made another in a string of shocking statements about her belief in the so-called right to abortion. Her comments were applauded by many of her followers… but others were left completely confused by her words.

“The choice is the Landlord’s, not the tenant’s, nor the neighbour’s,” the Instagram image read. “Your uterus. Your choice.”

It’s the echo of a tweet she sent on Sunday, December 8, which was a response to the question: “So heartbeats and viability be damned?” In that tweet, Jamil said, “Every. Time. The choice is the landlord’s not the tenant, nor the neighbour’s.” 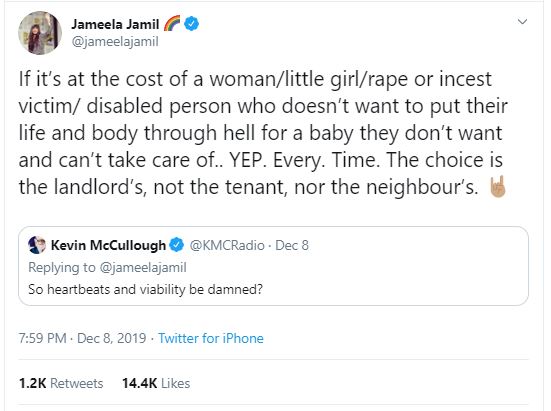 The most obvious flaws in this logic were pointed out by a few commenters.

1.  Landlords can’t deny human rights. Commenters on the two social media posts focused on the fact that landlords don’t have the right to strip tenants of their basic right to life or to kill them.

2. Tenants have legal rights. A second popular response was how difficult it is for a landlord to evict a tenant, even if that tenant hasn’t paid rent in months. Landlords can’t evict people on a whim or discriminate against whom they allow to live in their buildings. Women, however, can decide at any point to evict (and kill) their preborn child for any reason or discriminate against their own child because of a disability. No child fills out an application to be created and allowed to live in her mother’s womb for nine months, eagerly awaiting a yes or no reply that comes by way of a clamp that rips her limbs off. 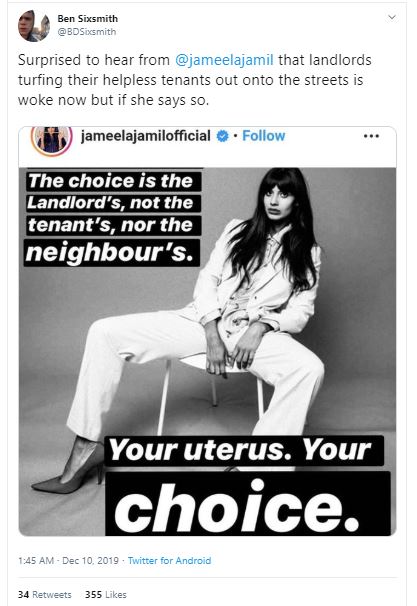 But that’s not where the issues here end. New Wave Feminists (NWF) had a lot to say about Jamil’s post, calling it “a bizarre and illogical argument” that is “inconsistent with the proclaimed ideology of any on the pro-choice left.” Some tenants are living in the United States illegally and don’t have the protection of the law or the ability to secure safe housing.

It comes down to the powerful and the powerless. The rich and the marginalized. […] So let’s humanize this analogy a bit…. Say the tenant is an undocumented migrant. We’re actually seeing this play out in real time in my own community right now. Because these landlords (who in reality are more like slumlords) know their tenants are ‘invisible’ and therefore powerless to the poor treatment they’re receiving, these slumlords are able to force them to live in terrible, inhumane conditions. No water or electricity. Rats and roaches everywhere. And if the tenants complain, well, they’re immediately evicted because the owner knows there’s no recourse they can take. Because, again, the tenant are powerless.

So, they’re thrown out on the streets, left to face the elements, and potentially death.

Social justice activists are up in arms when it comes to this type of treatment, and rightfully so. But when the[…] same type of scenario plays out in the womb, where these ‘tenants’ are the most invisible [member] of our human family, suddenly all that compassion and hunger for justice runs out. […] How do they not see their own inconsistency.

Like preborn children, these human beings are powerless. In many states, the preborn at risk of abortion are completely unprotected by laws and living in an unsafe place (the womb), just as are the migrants. Both are considered uninvited guests who don’t deserve compassion or rights. Migrants are treated as if they can be tossed out with the trash and left to die because they have no value to the landlord – just as Jamil sees no value in preborn children. No human being should be treated inhumanely.

Where does Jamil stand on landlords housing migrants in horrific conditions? Would she say it was the landlord’s right to kick them to the curb? It’s doubtful. But when it comes to preborn human beings, she’s all for killing them when the mother says so. The problem is that societal pressures often force women into abortion. Research has shown that about 73 percent of post-abortive women said they felt some form of pressure to abort. So many women aren’t actually freely choosing abortion at all.

Jamil herself grew up in a life of poverty and abuse, which gives her a unique perspective on how life can go from tragic to amazing. However, seven years ago, Jamil had an abortion and she credits her current successes in life to that abortion. 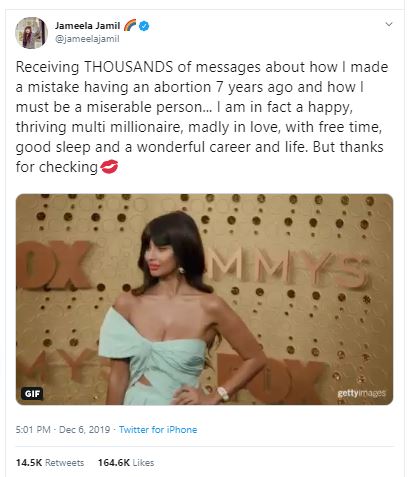 “Receiving THOUSANDS of messages about how I made a mistake having an abortion 7 years ago and how I must be a miserable person… I am in fact a happy, thriving multi millionaire, madly in love, with free time, good sleep and a wonderful career and life. But thanks for checking,” she said last week.

She also tweeted, “[…] anyone who feels uncomfortable with the fact that I shouted out what my abortion allowed me personally to go on to achieve… I believe it’s important for brown girls to see brown girls win big and be unashamedly proud.”

But what she is actually showing “brown girls” is that they have to sacrifice their children in order to succeed. It’s a lie.

The truth is that Jamil could have enjoyed these successes without aborting her baby. Adoption is always an option. There are 36 couples waiting to adopt a newborn baby at all times in the United States. Her baby would not have ended up in foster care, which she believes is a fate worse than death. He or she would have gone to a family of her choice.

READ: Actress Jameela Jamil and Gloria Steinem: Unless we can kill our children in the womb, ‘there is no democracy’

No one had to die for Jamil to fulfill her dreams.

Amid the social media storms she creates every time she posts about abortion, Jamil revealed in October that six years ago she tried to take her own life – about a year after her abortion.

Not everyone is lucky enough to be able to access affordable therapy. But if you can’t, in the mean time, there are helplines ( @crisistextline @giveusashoutinsta ) and community groups online around the world and friends and family who might surprise you as to how supportive they can be. It’s not something you have to tolerate on your own. You have nothing to hide or be ashamed of. I feel you. I’ve been there. And it’s a process of radical self forgiveness, patience and care that will help you out. It feels like the pain, nightmares and exhaustion will never end sometimes, but they can. And they will.❤️

While Jamil is the only one who can say for certain what led to her desire to end her life, studies have shown that abortion can lead to an increase in drug and alcohol use, depression, anxiety, suicidal thoughts, and suicide. A form of post-traumatic stress often referred to as post-abortion syndrome is known to affect post-abortive women — sometimes immediately, sometimes years later. Jamil has said that she suffers from PTSD. Poverty and abuse can cause PTSD and are also two of the pressures that can lead a woman to abort.

Jamil has had a remarkable life – one that shows women are capable of overcoming trauma. Sending messages to Jamil that call her “miserable” because she aborted her child is not the way for pro-lifers to reach post-abortive or abortion-minded women.

There are no signs that Jamil will be backing down from her pro-abortion stance anytime soon. But the next time she curses at pro-lifers and praises abortion, pro-lifers should be ready to offer compassion and support to women instead of delving into a social media war that won’t change hearts or minds on abortion.