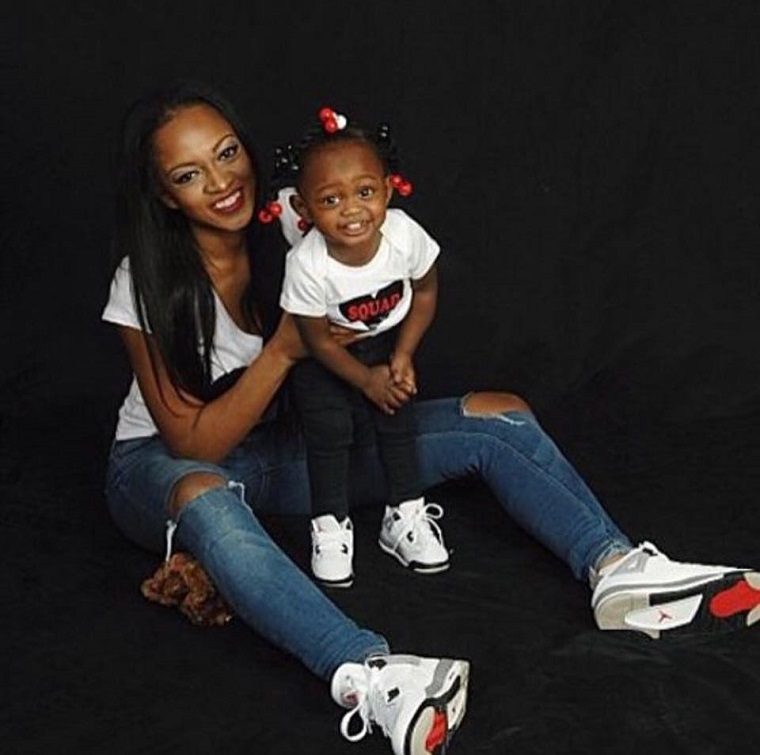 Tanai Smith of Baltimore is hoping that women will hear her story of IUD failure and learn from it. The 25-year-old mother of one was attending school and working when she decided to have an intrauterine device, or IUD, placed six months after her daughter was born, three years ago. IUDs are said to be effective, safe forms of birth control and can last for up to six years, but they come with risks, including that the device can migrate within the body. That’s what happened to Smith.

For three years after receiving the IUD, everything was fine for Smith. Her doctor said that since she was young and healthy, she shouldn’t have any complications, and except for initial cramping and headaches, she didn’t. Then in October 2017, she went to a new OB/GYN for her annual checkup, and her doctor was unable to locate the IUD during the physical exam. An ultrasound was unable to find it as well.

“There was no evidence of the device, which confirmed it had gone missing,” Smith told Cosmopolitan. “But because I had no symptoms, I wasn’t worried.” In November, Smith suddenly felt like she had been stabbed in the stomach. It was like nothing she had ever felt, and she immediately went to the emergency room. 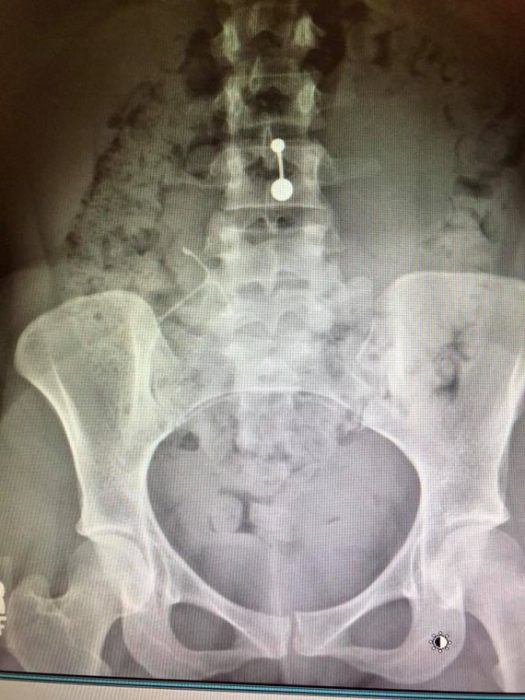 Tanai Smith’s IUD was found in her stomach before it ultimately migrated to her liver and broke. Facebook.

“At the hospital, I got an X-ray that told a very different story from my October ultrasound,” she said. “My IUD was in there, alright: It was wedged into the wall of my stomach. My doctors didn’t say whether they’d ever seen this happen before.”

Smith was referred to an OB/GYN who specializes in IUDs over a week later, who told her that there were two possible causes – the IUD was put in too soon after childbirth, or the tightening of her muscles during her menstrual period has pushed the IUD up. One thing was certain: Smith would need surgery to remove the IUD.

“Although I felt perfectly healthy, with no symptoms, I wanted it out,” she said.

The surgery was scheduled for December 13, several weeks after the IUD had been located. The surgeon was planning to make one incision below the belly button, and use a scope to remove the IUD. The entire surgery would be outpatient, and only take an hour. But tragically, that’s not what happened.

During the four weeks that she was waiting for surgery, the IUD migrated again… this time to her liver, where it broke into four or five pieces. When she woke up from surgery, Smith had three incisions, one near her belly button, and one on either side. The incisions were created as the doctors searched for the IUD. All the pieces had been removed, however, so Smith was sent home. 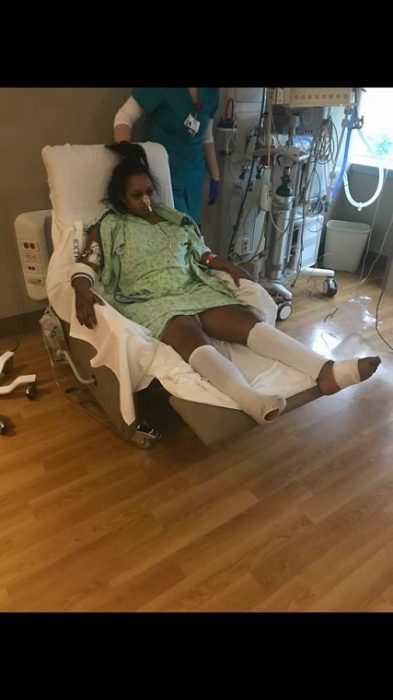 Tanai Smith in the hospital after surgery to remove the IUD that had migrated. Facebook.

“That night, I woke up vomiting – a side effect I hadn’t been warned about,” she said. “The next morning, severe pain was radiating from my abdomen, and the vaginal bleeding, which began at the hospital, had gotten heavier. Concerned, my mom called an ambulance.”

At the hospital, doctors performed an X-ray and took Smith in for another surgery – this time to remove her ovaries and her uterus, which had blackened. Doctors still have not confirmed why this happened, but guessed that it was the result of the stress her body was under in the first surgery, during which time she may have picked up a bacteria.

But Smith’s suffering didn’t end there. After that surgery, Smith spent weeks in and out of consciousness. She developed sepsis. Her blood pressure had dropped, and her kidneys stopped functioning. She was placed on dialysis.

“Every time my doctors came in, they delivered bad news,” said Smith. “It was so scary not knowing what would happen next. They would wake me up and ask whether I could feel my hands, which felt tingly, and feet, which grew numb. My doctors were alarmed and warned me that I may lose my limbs. Although I imagined what it would be like to have no hands and feet, I didn’t cry at the thought of it – I was in disbelief.”

After three weeks in the hospital, it was now the new year, and feeling had returned to Smith’s hands. Her toes, however, were blackening from necrosis – the death of the tissue due to loss of blood flow. On February 2, she was finally discharged, but not without the news that within a few months time, she would have to return to have the toes on her left foot and the tips of the toes on her right foot removed.

“When I slipped my left foot out of my sock, my toes were black, cold and hard to the touch,” she said. “Because the nerve endings there were already dead, I couldn’t feel a thing.

“Although there was no sign of bleeding, my middle toe, I noticed, had fallen off into the fabric. Like a baby tooth, it had been loose. And yet, seeing it neatly detached from my body still totally freaked me out.” 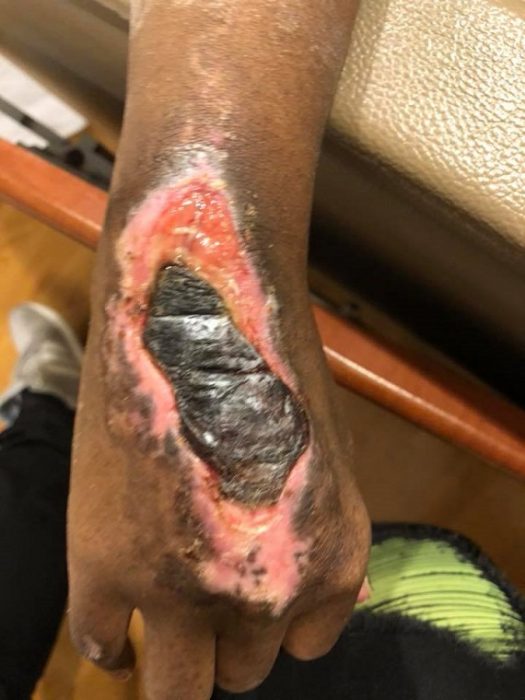 Tanai Smith’s hand after her IUD migrated and surgery to remove it led to sepsis. Facebook.

She saved that toe, but her doctor told her to throw it away, because there would be no use in having it, and he would be removing the rest anyway. On May 2, 2018, that surgery took place without complication.

“My situation is upsetting, but I’m thankful I didn’t lose my hands and all my feet, which would take a lot of adjusting,” said Smith. “As it is, I’ve had to slow things down: Although I haven’t been able to return to school or part-time jobs at Target and Johns Hopkins Hospital, where I worked as a residential assistant, I can still fulfill my daughter’s basic needs and bring her to the park – even though it’s painful to walk, and I’m stuck on crutches for now.”

Smith thought the amputations would bring closure, but she constantly wonders, “why me?”

“It’s always on my mind – I wish I knew what went wrong, so when my daughter asks me why she has no brothers or sisters, I can explain,” she said.

Smith said she did her research on IUDs and never heard of any severe complications such as the IUD moving, but IUDs have a nasty habit of doing just that. In 2012, the National Institutes of Health published a study which found that in rare cases, IUDs can migrate and uterine perforation is one of the most serious complications of IUD insertion. The study stated that an IUD “may potentially perforate through the uterine wall into the gynecologic, urinary or gastrointestinal system organs” and “result in several complications.”

Melissa Petro wrote about her horror story with an IUD in 2017. In 2012, years after having an IUD placed, she turned to Planned Parenthood, who discovered that the IUD had migrated. But the doctor there told her to leave it in.

“Bad advice: A displaced IUD can compromise its effectiveness and result in an ectopic pregnancy,” she said.

But she was without insurance, and so she took Planned Parenthood’s advice. Four years later, she was married and wanted to start a family. She went to have the IUD removed, and the doctor found it embedded in the uterine lining. It was able to be removed, but she only then learned that an IUD malfunction could affect her ability to carry a baby to term.

A woman named Brandy shared her story of IUD migration in blog post. It was found upside down outside of her uterus.

Another woman’s IUD went missing and was eventually found in her pelvis by her left hip.

Sara found hers floating around in her abdomen. 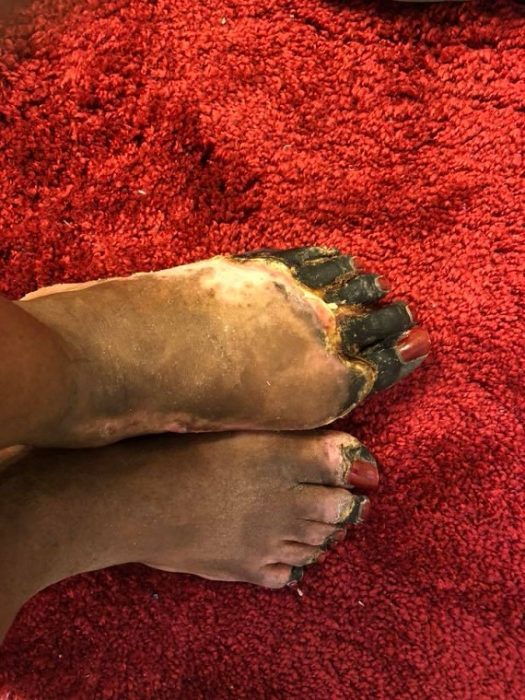 Tanai Smith lost the toes on one foot and the tips of her toes on the other after surgery to remove an IUD that had migrated. Facebook.

Since 2008, 4,775 women have reported “device dislocation” after using the Mirena IUD, and 1,322 have reported uterine perforations.

In addition to the risk of an IUD migrating, hormonal IUDs can cause a slew of other problems. Risks include depression and suicide, headaches, breast tenderness, irregular bleeding, mood changes, and miscarriage or preterm birth if you become pregnant. IUDs may also act as abortifacients in the event that they don’t prevent pregnancy.

As for Smith, she knows that she is lucky to be alive, but still must live with the fact that she can never again give birth. On June 5, 2018, she wrote on Facebook:

God is so good and he has a way of showing you how strong your are. Hes been blessing me and so many different ways. Im so grateful for everyone prayers and thoughts and it really means a lot to me. What happened to me shouldnt happened to anyone. My biggest goal was to bring awareness of what could possibly happened although it shouldnt. It started out with me simply just telling my story to my friends, than to the local news, then to a writer at cosmopolitan, and now a tv show. I was not built for this nor was i prepared, at least I thought i wasnt. I will no longer question why me? Because i finally found my answer.

She is also celebrating that she can finally wear a shoe on her foot, for the first time in seven months. She hopes that her story will help other women truly weigh the risks of placing an IUD.