While Planned Parenthood touts the importance of free birth control for all women, the fact remains that hormonal birth control can come with severe side effects. CNN reports that “[t]housands of women have filed grievances with the US Food and Drug Administration about unintended pregnancies, miscarriages, stillbirths, severe pain and bleeding” from the permanent birth control implant, Essure, favored by some in lieu of surgical sterilization (having tubes tied). An FDA press release notes that it has now issued a new restriction:

Since the FDA ordered Bayer to conduct a post-market study, and then to add a boxed warning and a patient decision checklist to the labeling, there has been an approximately 70 percent decline in sales of Essure in the U.S. The FDA has determined, however, that some women still are not receiving information about the known risks of Essure before implantation.

And therefore, the FDA felt that a “unique type of restriction,” was warranted, “using its authority to restrict the sale and distribution of a device to impose additional requirements needed to provide a reasonable assurance of its safety and effectiveness.”

CNN reports on the thousands upon thousands of disturbing reports on Essure, resulting also in lawsuits against its manufacturer, Bayer:

Essure is the only non-surgical permanent form of birth control for women on the market in the US. A health care provider inserts the flexible coils of the device into the fallopian tubes by going through a woman’s vagina and cervix. When it works as intended, scar tissue forms around the device over the course of about three months and builds a barrier to block sperm from reaching — and fertilizing — a woman’s eggs.

Of course, Essure is a more extreme method of birth control than most women are seeking, but it is birth control, nonetheless, and it’s one of the offerings that America’s abortion corporation touts as “gentle” and “natural.” Planned Parenthood of St. Louis makes it seem like something simple that can be completed on a lunch break, still allowing time for lunch: 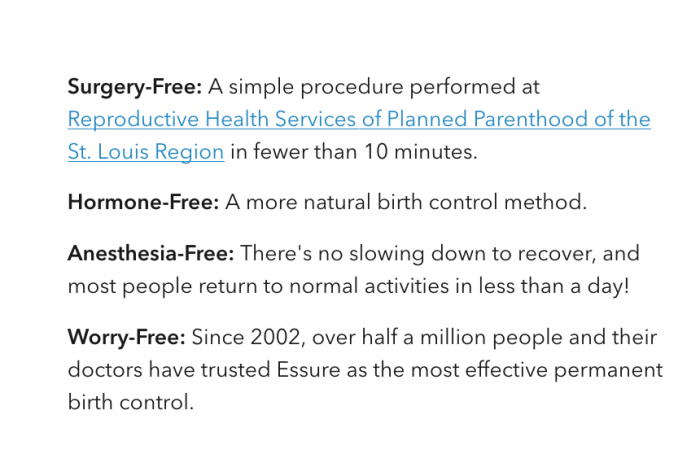 Planned Parenthood of Greater Ohio calls it a “gentle procedure… performed in less than an hour.”

It’s rather ironic that the abortion giant promotes how “natural” Essure (metal coils inserted into one’s reproductive organs) is, considering most of the time Planned Parenthood promotes hormonal birth control, which is so unnatural that it may actually act as an abortifacient — all while leaving women with horrible side effects.

Another example of problematic hormonal birth control is Mirena, an IUD device known in family planning circles as Long Acting Reversible Contraception (LARCs). Women’s Health Magazine reported on the side effects of Mirena, including belly bloating, extreme cramps, higher risk of infection, mood changes, ovarian cysts, and nausea, among others. Planned Parenthood doesn’t like to promote these consequences of having a constant flux of hormones released into women’s bodies for years at a time, but it’s reality.

But LARCs are all the rage in the reproductive health world. Not only does Planned Parenthood promote them, but major conferences offer sessions on them. One insisted that LARCs “should be offered as first line methods for virtually all women.” (See page 47). The differences between LARCs and traditional hormonal birth control such as the pill are obvious in how they are administered, but, ultimately, they do the same things, including leaving many women with miserable side effects.

Apart from that, hormonal birth control can function by preventing sperm from reaching an egg; however, it also has the potential to act as an abortifacient, as WebMD explains, when it describes the way an egg might be fertilized but not survive:

Many, many women have posted their horrific experiences with Essure on the Essure Problems Facebook page, which doubtlessly includes some of the 16,000 Essure users who “had filed lawsuits against the company, alleging outcomes that included hysterectomies, perforations, depression and weight gain.” And what of women with horrible side effects from implanted IUD devices who cannot afford to have the devices removed? In an effort to push birth control, family planning “experts” are putting women’s lives and health — and future fertility — at risk.

Whatever the case, while Planned Parenthood and other “women’s health” advocates shout from the rooftops that women need free birth control and how safe it is for them, the reality is that hormonal birth control comes with heaps of horrid side effects for many — and may even kill newly-created preborn babies in the process.