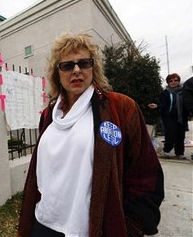 It’s not a good sign for an abortion clinic’s future when even the abortionist quits.

Diane Derzis is infamous in the south as the owner of abortion clinics from Mississippi to Georgia–which keep having problems or being shut down. Now it looks like her Columbus Women’s Health Organization in Georgia will be her next abortion facility destined to die a slow death. CEC for Life reported today: on the resignation of one of her clinic’s primary abortionists:

“Theresa Spenney, President of Chattahoochee Valley United for Life (CVUL), announced at a Wednesday press conference that her organization received confirmation of the abortionist’s resignation after making his central OB/GYN practice, one of the largest in the state, aware of his side job within the abortion industry.”

“Since Diane Derzis bought this abortion facility several years ago, we have witnessed the condition of the building and grounds deteriorate, and have heard more and more reports from women who have been inside that the same is happening within. We have also heard numerous complaints from women leaving the Columbus Women’s Health Organization about the care being provided, which we began documenting.”

This should come as no surprise to people familiar with Derzis and her operations. Derzis has said that her abortion work is a call from God, but her Mississippi clinic cannot find a abortionist with admitting privileges at a local hospital, as required by Mississippi law. In fact, the home page of the clinic opens with a banner advertisement looking for a doctor who can kill babies and who meets the admitting privileges requirement. So far, no takers. The 5th Circuit Court of Appeals court said this week it will hear arguments on the Mississippi law next month, but until then, Derzis’ unsafe clinic cannot take babies’ lives.

Her troubles across the state line in Alabama led her to continue to operate her New Woman, All Women abortion clinic even after she lost the license. After much publicity and health department reports, the clinic finally shut down.

Apparently Derzis’ troubles skipped along with her to the next state and now her Georgia clinic can’t keep an abortionist. CEC For Life notes:

“The news of this resignation comes on the heels of another blow to Derzis’ Georgia facility.  Her second Georgia abortionist, Andre Williams, was recently indicted for Medicaid fraud.  With no abortionists, a dilapidated building, and growing pressure from the public calling for an investigation from the state, it looks as if Derzis will soon be facing her own resignation.”

Reportedly, Derzis’ Alabama clinic and her home are up for sale, indicating that her reign of terror over the unborn may soon cease simply because the money and resources are drying up.