The hashtag #ShutDerzisDown became a reality in Birmingham, Alabama this afternoon. Judge Joseph Boohaker in Jefferson County, AL has ordered the New Woman All Women clinic, which had previously been shut down but continued to operate anyway, to be permanently closed because it was operating illegally.

Ruling in favor of the Alabama State Board of Health, who actually had to file a lawsuit in order to enforce its own laws because abortion clinic owner Diane Derzis and abortionist Bruce E. Norman continued to operate the facility, the court has upheld the state’s claims and ordered the clinic closed.

The ruling, which you can read in its entirety here, upheld the accusations of the Alabama State Board of Health, which said the clinic was operating illegally as an abortion facility. The ruling noted that the facility meets the definition of an abortion or reproductive health center, was found to “be a hospital,” and was operating without a current license. Further, the court issued a “permanent injunction” against Norman, the current owner of the abortion clinic.

Derzis, who also owns the only abortion clinic in Mississippi, where just yesterday an ambulance had to be called, had seemed to get around the law by letting Norman run her clinic and doing only a minimal number of abortions. Norman had argued that since he did not do enough abortions to be defined as an abortion facility, he was operating legally. The law says if a provider does 30-plus abortions in two months of a calendar year, the facility meets the definition of an abortion clinic and needs a specific license. Norman attempted to justify his illegal abortion operation with Derzis by saying he performed abortions only three days in any month.

According to the judge:

But Judge Boohaker ruled that this was a technicality that doesn’t make Norman’s abortion operation legal.

“The sole evidence before the Court in regard to the number of abortion procedures performed at the Birmingham Facility is the testimony of Bruce E. Norman who is the owner or proprietor of the said Birmingham Facility, and who actually performs all of the abortions at the said Facility.” The judge then recounts the statistical calculations of Norman against the reality of the law, calling Norman’s reasoning “contradictory.” The judge concludes, “The court can only conclude that Dr. Norman’s reckoning that he performs less than 30 abortion procedures per month is based upon a mistaken belief that bi-weekly is the same as semi-monthly, and for 10 months of the year that reckoning is clearly correct. However, for two months every year this clearly is not the case.”

In its story, local paper The Birmingham News opened with a simple but stark lead that reminds us of the reality that this abortion clinic tried to work around the law to keep killing babies:

A judge this afternoon ordered that abortions can no longer be performed at a clinic on the city’s Southside because it does not have a license to do so.

Despite the fact that Norman and Derzis were found to be in violation of the law and operating an unlicensed clinic, Norman’s attorney expressed the sadness of the abortionists to losing. The Birmingham News reports that attorney Scott Morro said:

The doctor is terribly disappointed. … He testified openly and explained what was happening at that facility. He is disappointed the judge has inferred that for two months out of a calendar year he does more than 30 abortions. Dr. Norman clearly knows he cannot do that.”

Though he is disappointed, Norman also admitted to the Court that he was operating a facility with the “sole purpose” of providing abortions:

And arguing abortion on a technicality clearly wasn’t working for Judge Boohaker. New Woman All Women is now, again, and hopefully finally closed. Ruled illegal and unlicensed, the facility can no longer take lives in Birmingham, AL.

Here’s a summary of the ruling itself: 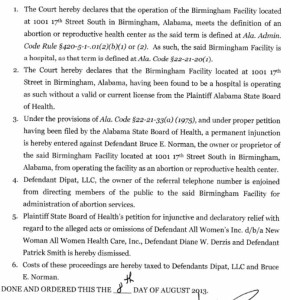