The media is all abuzz over Hillary Clinton’s new book, “What Happened ” — a book certain pundits believe is nothing more than a long list of excuses and blame shifting for Clinton’s failed run for the presidency in 2016. And while there are many reasons why Clinton lost her 2016 presidential bid, one of those was likely her radical stand on abortion and support for Planned Parenthood. After all, Clinton hired campaign staff associated with Planned Parenthood, and was endorsed and funded by the abortion corporation.

While Clinton is to blame for her own positions on “issues” like abortion, certainly she also has the Democratic Party to thank, after the group bragged about making its 2016 platform the most pro-abortion platform in history. As Live Action News’ Rebecca Downs noted in her year-end analysis of the 2016 election results, Hillary and the Democrats left pro-lifers behind.

But in reality, Clinton has mainly herself to thank for her loss. Surrounding herself with hard-core abortion fanatics put the first female presidential candidate in a bubble which alienated voters. From the beginning, Clinton has stated that her position on abortion is 100 percent in line with Roe v. Wade.

What does that mean? It means she supports abortion on demand for any reason and at any gestational age.

And we saw this radical support for abortion during her campaign, over and over. Voters understood that Hillary’s radical support of abortion was years in the making, and how extreme Hillary was, because she did little to hide it.

Many believe Hillary was the impetus behind President Bill Clinton’s pro-abortion executive orders and radical stance, despite his infamous lip service to the idea of abortion being “safe, legal, and rare.” Bill Clinton’s veto of a ban on partial-birth abortion — the horrific partial-birth abortion (D&X) procedure, in which an abortionist partially delivers the preborn child before stabbing the baby in the neck and suctioning out his brain — is believed by many to have Hillary’s fingerprints all over it.

As Senator, despite the partial-birth abortion ban being supported by a majority of Americans, Mrs. Clinton defended this procedure and denied that her position was extreme: “What I do think is extreme is making a decision in this body to outlaw a medical procedure that may or may not be required,” she said at the time. This misjudgment about the nation’s  support for abortion, naturally, has yet to be mentioned in interviews about her new book.

Hillary’s radical view of abortion as just another “medical procedure” was not in step with the views of the American public, the majority of whom do not support abortion beyond the first trimester. But, despite this fact, in an interview on Face the Nation in 2015, the presidential hopeful (citing false claims that late-term abortions are performed only for “health” reasons) said she would hate to see the government interfering with late-term abortions:

For years, Clinton has held an unscientific belief that the preborn child in the womb is nothing more than property and therefore is not fully human. This type of dangerous ideology has led previous societies to target Blacks as slaves, to promote eugenic sterilizations, and to kill millions of Jews in gas ovens or to imprison them in Nazi concentration camps.

These radical views may have influenced taxpayers who do not support using their tax monies to pay for abortions –something Clinton has supported for many years. In fact, under Mrs. Clinton’s nationalized healthcare proposal of the 1990’s (as First Lady), she suggested funding abortions in her healthcare plan: 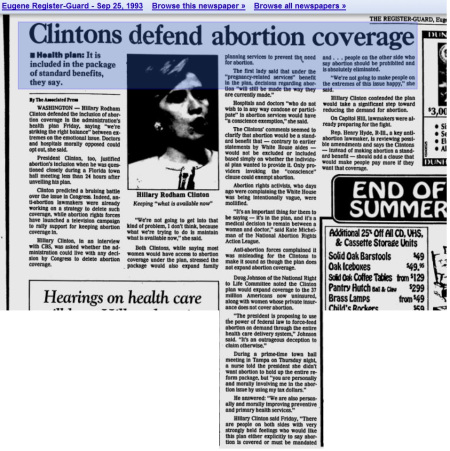 Fast forward to January of 2016, when Clinton called for an end to the Hyde Amendment, which prohibits the use of most federal dollars to pay for abortions. She then called for more —  not less — federal funding of Planned Parenthood.

The award’s namesake, Margaret Sanger, was the founder of Planned Parenthood. Sanger was a proponent of eugenics who spoke to the women’s branch of the Ku Klux Klan in 1926. Despite these facts, instead of disavowing Sanger, Clinton stated that she was “in awe of” Sanger: 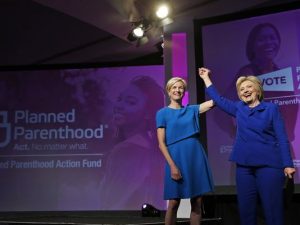 But instead of separating herself from the baby parts scandal (which has led to several criminal investigations), Hillary doubled down and defended Planned Parenthood, stating in part, “I think it is unfortunate that Planned Parenthood had been the object of such a concerted attacks for so many years…”

Of course, Clinton’s gratitude naturally came on the heels of a large cache of money set aside by Planned Parenthood to endorse Clinton in her presidential race.

As Hillary makes her rounds across the nation, promoting her book, the answer to why she failed to be elected is a complicated one with many factors. But so far, the media hasn’t recognized that while a million abortions are committed every year in the United States, Americans still view it as a generally evil act.