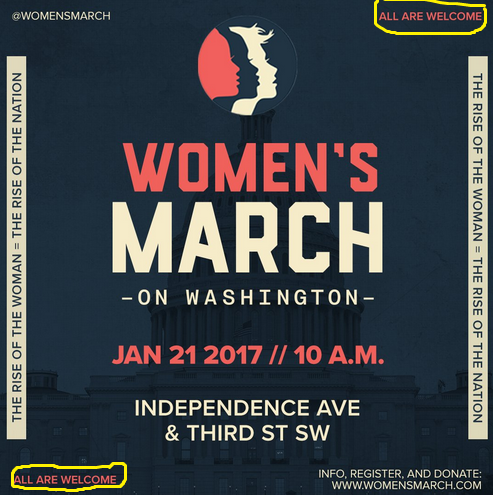 January saw many different marches, including two related to abortion, less than a week from one another. If you turned to the mainstream media for coverage of the Women’s March, it was hard — impossible even — to avoid coverage. The event, which took place on January 21, 2017, claimed to be inclusive and welcoming of all women, but withdrew partnership of pro-life groups. Many pro-life women who did attend were treated with disdain.

Even without having attended, I still felt the negative effects of the Women’s March. As a young woman who is pro-life, I hate being grouped in with all other women, as if we could all possibly be in favor of abortion. The March even made the January 21 episode of Saturday Night Live, where in his opening monologue, host Aziz Ansari declared “an entire gender protested against him [President Trump].” Yet that’s far from the truth.

The Women’s March was hailed by the mainstream media for its high numbers. Live, updated reporting from the Associated Press estimated the numbers at about 500,000. The March wasn’t able to keep its original route to the White House, on account of the numbers. Apparently we’re supposed to be impressed, since the AP noted at least twice that it was “one of the largest demonstrations in the city’s history.”

Pro-lifers know what else has brought estimates of up to 650,000 people, and that’s the March for Life.

And yet the media hasn’t reported much on the March for Life over the years. Pro-lifers have actually had to demand the event receive fair coverage. As News Busters has tabulated, however, it hardly receives more than a few seconds from the major networks. A recent study found that networks covered the Women’s March 129 times more than the 2016 March for Life.

While the March for Life did receive more coverage this year, it’s likely because of high profile speakers, notably Vice President Mike Pence, who was the highest ranking official to ever address the event. President Donald Trump also declared support for the event and had referenced the March for Life in interviews and speeches. His pointed remarks included an ABC interview with David Muir, where the president stunned Muir, and pushed the network into covering the event, (though they did delete references in their transcript).

The Daily Caller made a telling point about the coverage, however. Many in the media — while they did cover the event this year — couldn’t be bothered to call it pro-life, or even by its title: the March for Life. If one searches for “anti-abortion march” in Google news, many well-known news sites — the New York Times for instance — describe the event in such a way. Speaking,of the New York Times, one can find many glowing pieces from the site regarding the Women’s March, including several just on fashion at the event.

A search on the Associated Press’ site of “March for Life” did not bring up any similar live updates as the AP provided for the Women’s March. The four articles listed all use the term “anti-abortion,” refuse to say the event’s name in the headline, and are generally focused on politics — particularly Mike Pence or former president Barack Obama. The AP continued to focus on the Women’s March in glowing terms even after it was over, printing  yet another article on January 26 about signs at the event. Why weren’t more signs — like the one below — from the March for Life featured?

The mainstream media also emphasized that the Women’s March was peaceful, with no arrests. Yet many would hardly consider it peaceful that Madonna, one of the march’s many celebrity speakers packing the lineup, told a cheering crowd she had thought many times about “blowing up the White House.” The Secret Service ended up investigating. The vulgarity continued, as the pop star’s speech included several expletives, as did a rap from actress Ashley Judd.

Public outdoor walls were also desecrated with pads women wrote messages on. And the signs, many of them containing profanity and other vulgarity, were left to litter the streets of the Capitol.

Vulgar signs and protesters can be found at the March for Life as well — but chiefly because of the presence of counter protesters. A contributor for IJR attended both events, and included pictures painting a stark contrast of the events only a week apart from each other.

The media coverage which followed this year’s March for Life, probably thanks to the presence of Vice President Pence, is a welcome change. There was a noticeable difference in coverage from the Washington Post, which last year falsely referred to attendees as “a small…crowd” in their headline. This year, there were several articles by the Post, and they used the actual name of the event. Coverage of the Women’s March, however, was similar to that of the New York Times and still exceeded coverage of the March for Life

While this year’s March for Life received 37 times more coverage than last year, it still received 3.4 times less coverage than the Women’s March, NewsBusters found. The mainstream media took a step in the right direction this year, but there remains plenty of room to grow.