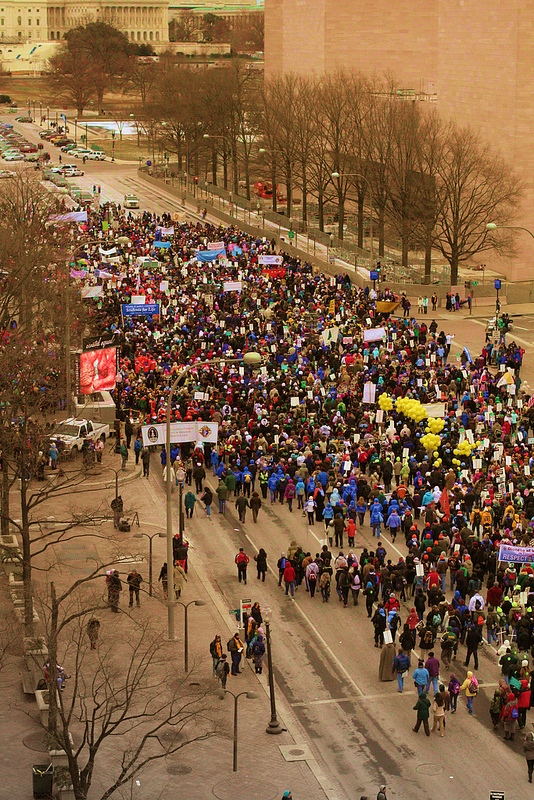 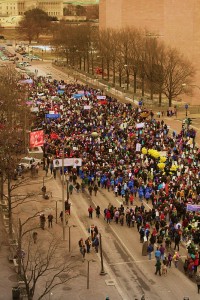 While the anniversary of Roe v. Wade may have been something for abortion advocates to celebrate, they would still have to deal with the presence of pro-lifers who braved the cold last month. And for some, their way of dealing with that presence meant counter-protesting, though not exactly in the classiest of ways.

Students for Life of America is a great group, and it certainly had a presence at many of the events. On Tuesday, January 22, the actual anniversary of the infamous court decision, they gathered outside the Supreme Court on what must have felt like the coldest day of the year. A press conference was held which involved prayer and laying out 3,300 carnations in memory of those babies aborted every day. You can see those pictures in the group’s photo album on Facebook. What you’ll also see, though, is that the group was interrupted, most notably during their prayer, by pro-abortion counter-protests.

The group’s signs, which read “ABORTION ON DEMAND & WITHOUT APOLOGY,” also featured a link at the bottom. At the website, stoppatriarchy.org, the headline reads: “END PORNOGRAPHY AND PATRIARCHY: THE ENSLAVEMENT AND DEGRADATION OF WOMEN.” Now, initially, that may not sound like such a far-fetched objective, as it doesn’t seem conflicting for pro-lifers to also be against pornography. But a closer look at this website (if you hadn’t already seen the signs beforehand) reveals that the group behind it is also vehemently pro-abortion and goes about communicating its message in a loud and vulgar manner.

Another pro-life event and prayer which this group interrupted was the prayer vigil outside Planned Parenthood of Metropolitan Washington on Thursday, January 24. You can see that photo album on Facebook as well, as Students for Life was one of many groups participating in this event. Toward the middle-end of the event, those pro-abortion counter-protesters with their signs decided to take part as well, shouting their pro-abortion slogans.

Prayer is a powerful tool. It is not a tool all pro-lifers turn to, but for those who do, they understand how it can bring about wonderful change in their lives and in the lives of others. Even secular pro-lifers will likely notice, though, that many pro-abortion groups – at least the loud and angry ones – hate prayer and that they just become even louder and angrier as they desperately try to drown out the more peaceful pro-life groups in their presence. Fortunately, Thursday’s prayer vigil was not drowned out by the signs and shouting.

At the Supreme Court, where the March comes to an end, is usually where the counter-protesters appear. Our group did not observe as many counter-protesters or signs as we have in years past, besides a sign that read, “Keep Abortion Legal,” which appeared washed out by the snow, and a few of the “ABORTION ON DEMAND & WITHOUT APOLOGY” signs. Of course, just because we didn’t see them does not mean that they weren’t there.

The Naked DC made a blog post of five pro-abortion counter protesters they came across. Please note that the signs do contain offensive language and statements.

The blog post’s title is actually quite hilarious: “Pro-choice protesters exhibit class, willingness to share ideas at March for Life.” The title is, of course, meant to be sarcastic. Not all pro-choice people act like the ones in this blog post, but those who come to the March are angry and loud with their vulgar and offensive signs, the contrast against loving and encouraging pro-lifers is too much. Dialogue and finding points of agreements thus unfortunately becomes near impossible with such people.