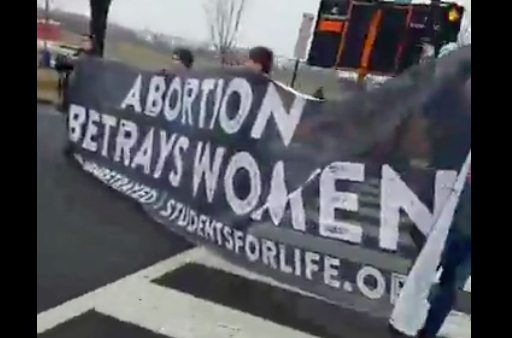 The Women’s March on Washington was in full force yesterday, with thousands of women flocking to the nation’s capital. Their stated goal: to “send a bold message to our new government on their first day in office, and to the world that women’s rights are human rights.” Originally, march organizers claimed to be inclusive of all women, but that pretense was quickly dropped.

Students for Life of America was denied the opportunity to be a partner in the march, and while pro-life organization New Wave Feminists was originally approved, once pro-abortion participants realized they were made partners, they quickly complained, and New Wave Feminists was removed. Stanton Healthcare, a women’s medical clinic providing abortion alternatives and And Then There Were None were also removed. After the “controversy” over allowing pro-life women to participate, the march organizers released a statement making it clear that this was a pro-abortion march only: 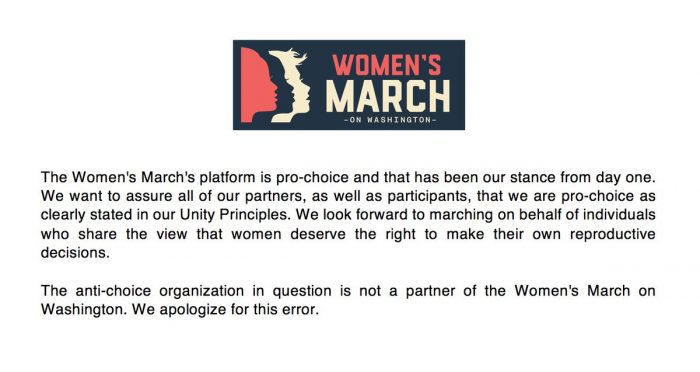 Of course, Planned Parenthood, NARAL Pro-Choice America, and the Center for Reproductive Rights were all approved. Planned Parenthood President and CEO Cecile Richards was a featured speaker for the march. It’s clear to see that the march was not inclusive of all women — despite the organizers’ claims of inclusiveness. In many ways, this was simply a march for abortion.

Despite the fact that an extreme pro-abortion viewpoint alienates more than half of American women (as at least 65 percent of women support limiting abortion), one Southwest Airlines flight chose to support the march anyway.

Several women were flying Southwest on their way to the march and reported to social media that the flight turned their cabin lights pink in support, to cheers from the passengers.

When your Southwest flight crew celebrate a plane full of kickass women and men going to the Women’s March by lighting it up!! ?#lit #womensmarchonwashington #lovetrumpshate

Southwest turns on the pink lights and a loud cheer erupts. #WomensMarch pic.twitter.com/Ft8ukziRVk

The move to light up the cabin pink was surely thrilling to the pro-abortion advocates going to the march, but it was a slap in the face of pro-life women who were denied the chance to be represented at the march as equals. Just under half of American women consider themselves to be pro-life, yet these women are effectively being told that they are not welcome in the modern feminist movement — which appears to place abortion above all else.

At the march itself, many of the pro-lifers brave enough to still attend, despite march organizers making it clear that they were not wanted, were met with outright hostility and even violence. (New Wave Feminists reported having a positive experience.)

Students for Life of America was one of the groups who still attended the march, and for them, the experience was brutal. “It was a brutal day,” Kristina Hernandez, director of communications for the anti-abortion organization Students for Life, said. “I did not feel safe at all.” Reagan Barklage, the western regional director for Students for Life of America, agreed. “One of our girls was spit at, someone tore my sign in multiple pieces, we had people just yell at us but the main response was people just said ‘my body my choice’ when they walked past us,” she said. Still, these brave women refused to be intimidated out of fighting for life.

Since they wouldn’t let @Students4LifeHQ into the #WomensMarch, we just jumped into the front with our signs. ;) #hardcore #prolifeprowoman pic.twitter.com/zqT6JGmmX6

Women’s Marchers run ahead to block the pro-lifers pic.twitter.com/9Dkw49ySCG

But we were there. We needed to be there–>For one anti-abortion group, women’s march was ‘brutal’ https://t.co/kjs4IpbR08 via @usatoday

Abby Johnson, former Planned Parenthood clinic director and founder of pro-life organization And Then There Were None, reportedly received death threats from someone on Twitter if she went through with attending the march. “She replied, ‘Don’t come to the Women’s March. The Women’s March wants you dead,” Johnson told “The Daily Beast.” Johnson wasn’t dissuaded, but she faced violence and hostility while at the march as well, even though she is currently pregnant with twins.

A pregnant woman with twins was “barreled” over yesterday at the #WomensMarch because she was #prolife, according to @BuzzFeed. @AbbyJohnson pic.twitter.com/mXxhBrgEae

To their credit, some members of the Women’s March team came and formed a line around Johnson to protect her after she was assaulted. Johnson was truly brave for standing up for life at the march, despite the threats and violence against her.

A father and son were also assaulted at the march. Josh Wheeler was at the march with his father, trying to peacefully advocate for life, when pro-abortion marchers attacked them. According to the Wheelers, a protester assaulted them using a large stick, before tearing down their sign while other marchers screamed profanities at them.

It’s truly shameful that so many pro-lifers were the victims of such violence and hostility, simply because they exercised their free speech right to disagree with marchers who support abortion.