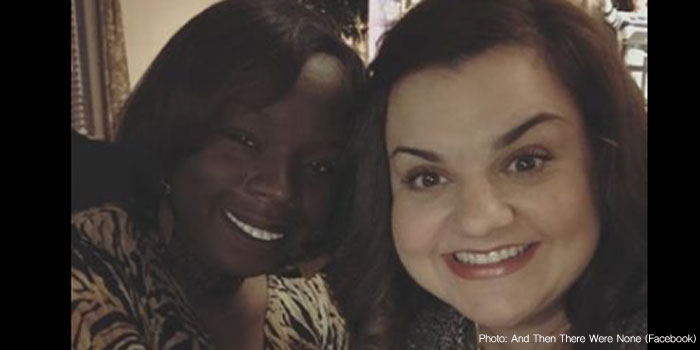 And Then There Were None is a pro-life outreach and ministry to current and former workers in the abortion industry. Founded by Abby Johnson, a former Planned Parenthood director in Texas, the organization has helped many workers leave the abortion industry by offering help and support to them — financially, spiritually, and emotionally.

In the Facebook video below from ATTWN, Abby describes having prayed for abortion industry workers. One of the workers she prayed for was Adrienne Moton, who worked for “House of Horrors” abortionist Dr. Kermit Gosnell in Philadelphia. After serving three years in prison, Moton contacted Abby, who had written her letters while Moton was serving time.

In the interview with Abby, below, Moton describes having known Gosnell for years. She even had an abortion at his facility, committed by Gosnell himself. Over time, she grew to regard Gosnell as a sort of family member, and began calling him “Uncle.” She says that years later, when she later gave birth to her daughter, Dr. and Mrs. Gosnell were helpful to her, taking her to the hospital when she went into labor, and waiting with her until her family could arrive. When Gosnell offered her a job at his facility in 2004, as a single mother, she felt “I had to do what I had to do,” because of a precarious living situation.

Moton worked directly with patients in Gosnell’s facility and helped with procedures, remaining there as an employee for three years. “The money he was offering me, I needed it,” she says. Other abortion industry workers, including a former Planned Parenthood manager, have stated that as single parents, the amount of money offered by the industry is nearly irresistible.

Tearfully, Moton recounts her “worst day” at the facility:

[Gosnell] performed a procedure of a 29.4 weeker, and um, I haven’t been the same since. I had to, uh… He [the baby] was on my station, and… I remember praying over him. I covered him. I had to put him out of my sight until the doctor came in.

Johnson notes, “During the healing process, that’s the baby that has continued to come to mind for you…. That baby had a profound impact on your life…. and you wrote a letter.”

Moton replies, “Yes. I gave him a name. To me, he would have been a linebacker… and I named him Jacob or Jason… it was a “J” name. And um, I just felt that I needed to get some type of justice for him.” Moton says she turned her phone into the FBI with the baby boy’s photo in it.

Police came to Moton’s home at 5:00 am on January 21, 2011, to arrest her — a day she calls the “best day ever” because despite being arrested, she finally felt free of the weight she had carried for so long. “I just felt peaceful,” she says. “I didn’t have to hide no more… I just let it all out. It was the best feeling. The best feeling.”

When Moton was released from prison, she says at first, she was afraid that pro-life people would call her a “monster” and “murderer” for what she did when working for Gosnell. She didn’t really trust anyone, and she lost a lot of friends. But when she came to ATTWN’s ministry, “I felt loved, I felt support,” she says. “I didn’t feel fakeness, it was just genuine, and um, I can’t stop hugging these ladies. It’s just a beautiful thing to know that someone has walked in your shoes and to know that someone loves me for me. They don’t care about my past. They don’t throw my past in my face… I’m just so thankful and grateful to God for this ministry.”

“Friends, this is what the pro-life movement has to be about,” Abby says in the video, referring to the idea that former abortion workers — and all of us — are sinners who are offered God’s mercy. “It has to be about conversion of heart.”

Abby adds, “Being pro-life is messy. It’s being the hands and feet of Christ…. It’s about doing everything you can, not just to save a baby, but to bring about conversion.”