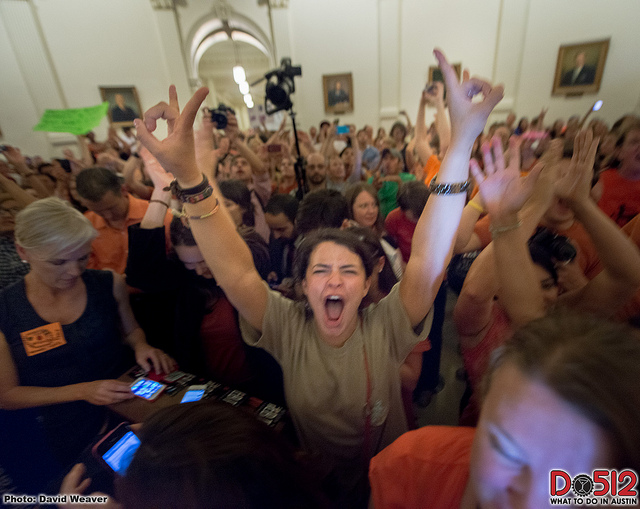 When considering the nature of abortion, it shouldn’t be a surprise that the institution is saturated with hypocrisies. Here are four of the biggest hypocrisies of the abortion movement..

1.) Your opinion only matters if you’re pro-abortion.

The message to women who advocate life is clear: shut up. If they don’t shut up, they should be prepared to pay the price. The vitriol hurled at pro-life women is astounding. To endure such venomous speech has become a type of initiation for pro-life, female public figures. Mia Love received pictures of aborted fetuses, and Live Action’s very own Lila Rose has gotten her fair share as well. Bill Maher found it appropriate to refer to Sarah Palin’s child as “retarded“, and David Letterman made a crass sexual joke about her then 14-year old daughter.

How about men? They need to stay out of “women’s issues.” “No uterus? No opinion!”

If that’s the case, can we have female politicians stay out of “men’s issues”? Also, I don’t hear many pro-aborts complaining about the Roe v. Wade decision, which was made by men. NARAL has no problem propping up pro-abortion men. I get it: men are allowed to voice their opinions only if they support abortion.

Irrespective of gender (and race, ethnicity, faith etc.), we are one nation, one people whose destinies remain intertwined. That means everyone gets an opinion.

2.) Science only matters when it’s convenient.

Sometimes, a dream becomes a nightmare. Scientific advancements haven’t done pro-abortionists any favors. Ultrasound technology reveals both the humanity and rapid development of the pre-born. Abortion supporters must now resort to pieces titled “So what if abortion ends a life?”.

Another strategy employed by pro-aborts is to ignore the science altogether. Debbie Wasserman Schultz ignores the question of whether her children were human before birth. If she says “yes,” she confesses to supporting murder. If she says “no,” she blatantly disregards science.

3.) Animals get love, but not humans.

There’s nothing wrong with loving animals. Animals are beautiful creatures and deserve to be treated with respect. Normally, I don’t use the word “deserve” as it denotes entitlement. Here, the word “deserve” is appropriate. Animals possess an intrinsic value which entitles them to compassion, dignity, and respect among other things.

I hate to break it to abortion supporters (actually, no I don’t), but the intrinsic value of a human is greater than that of an animal. Just when you thought it was impossible, our culture sank to a new low when the media covered Cecil the Lion more than it did the trafficking of babies’ body parts. The same abortion supporters, who demand Cecil’s hunter’s head on a silver platter, don’t bat an eyelid at babies surviving abortions only to be murdered later.

4.) It’s okay to discriminate pre-birth, but not later.

Abortion advocates view themselves as pioneers of social justice and equality. The institution of abortion itself proves this view to be false. Racism? Gender discrimination? Special needs discrimination? Check check check. Abortion is arguably the most discriminatory institution in existence. You won’t hear a peep from abortion supporters about this or about Margaret Sanger, Planned Parenthood’s eugenicist founder.