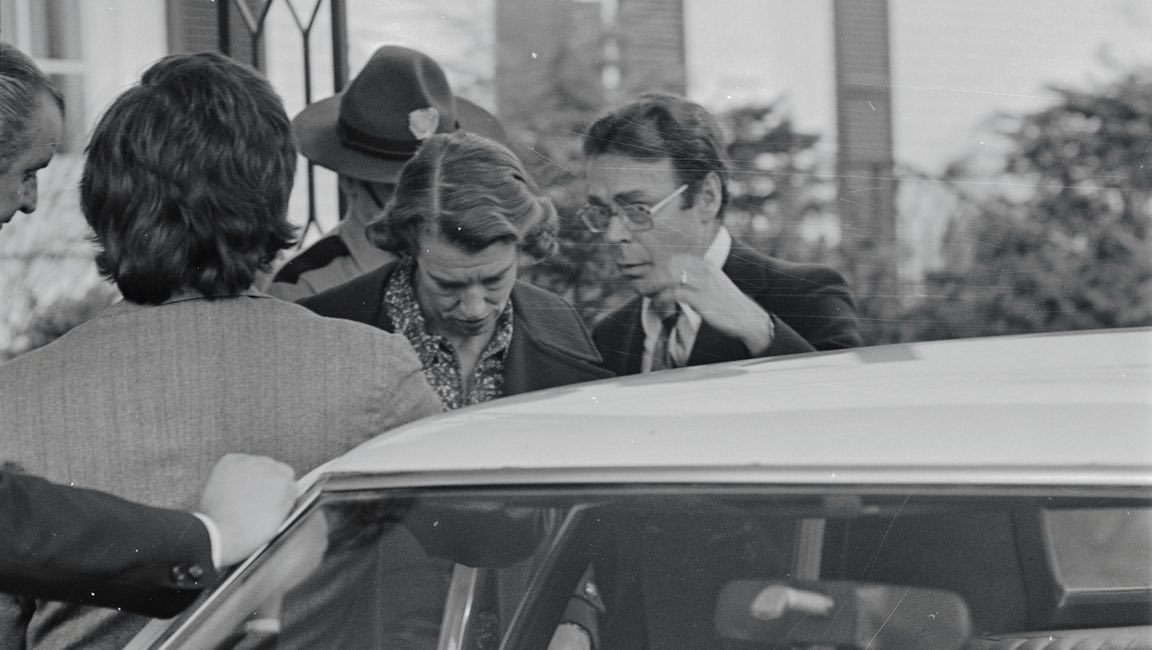 Ideologies promoted by elites connected to eugenics-based organizations like the Population Council, Planned Parenthood, and the American Birth Control League have connections to past efforts targeting minority men and women for compulsory sterilization. Tragically, even today, these eugenic atrocities are still being alleged. Just this month, charges have surfaced from a whistleblower alleging that forced sterilizations are being perpetrated against immigrant women in the custody of the Georgia Immigration and Customs Enforcement (ICE) detention center. These claims are now being investigated.

Silence on eugenics potentially leads to more victims, and as it has been said, those who forget the past are condemned to repeat it. Exposing the thought processes surrounding eugenics is important, because it is still occurring today in many forms.

One historic yet rarely mentioned purveyor of eugenics was Cordelia Scaife May, a financier of many organizations including the eugenics founded Population Council, which was responsible for bringing the abortion pill to the United States. May was the heiress to the Mellon banking and industrial fortune and sister to philanthropist and publisher Richard Mellon Scaife. She admired Margaret Sanger, was a friend to Garrett Hardin, worked with Planned Parenthood, and served on the board of the Population Council, contributing $11.4 million to the Council’s work during the 1960s. 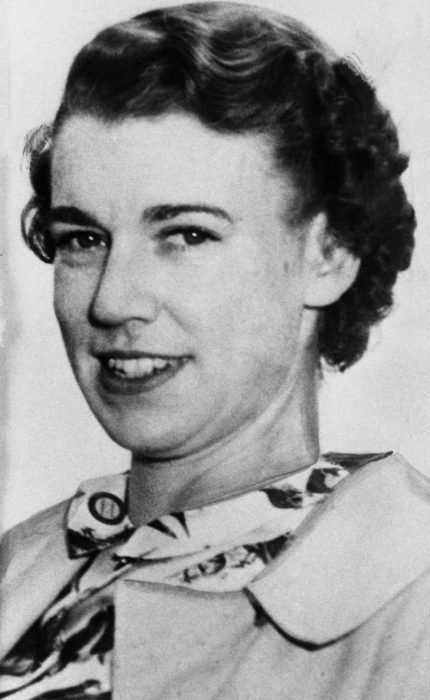 In an article released by the New York Times last year, it was alleged that a former president of the Population Council once accused May of favoring compulsory sterilization to limit birth rates in developing countries. Whether those associations helped form her views on sterilization or not is unclear, but what is clear is that May, like so many others within those groups, held an elitist view centered in eugenics.

According to Philanthropy Daily, May began her career as a supporter of Margaret Sanger. The New York Times wrote that Sanger “provided the sense of direction Mrs. May had craved.” In 1961, May wrote to Sanger, “I have always admired and tried to take a part in the work you have started.” According to the Los Angeles Times, May even kept a portrait of Sanger in her living room. Today, a bust of Sanger remains on display at the National Portrait Gallery of the Smithsonian Institution, despite her racist and eugenicist views, reportedly gifted by May. 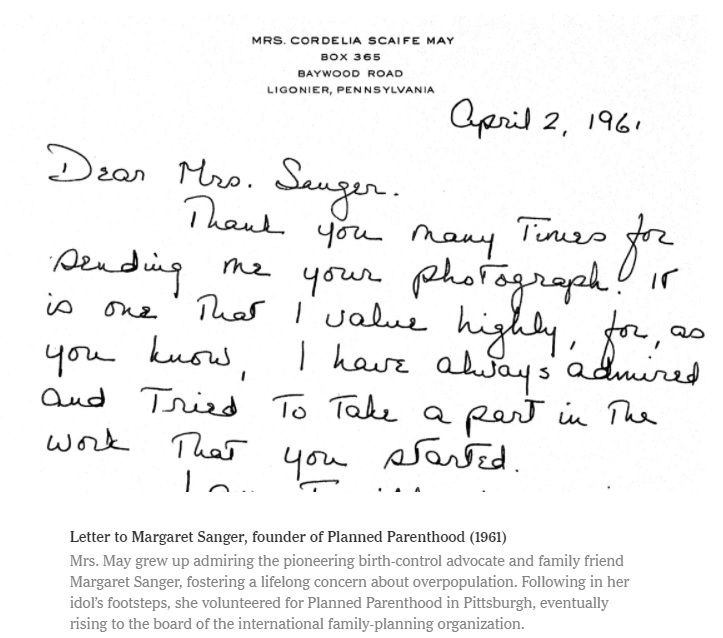 In 1963, May signed on to a full-page letter in The Pittsburgh Press urging President John F. Kennedy to engage the federal government in “a greatly accelerated program for limiting world population,” reported the Post Gazette. “In the next 15 short years there will be still another billion people if the present rate of increase continues — most of them in countries now receiving U.S. aid,” the several dozen signers wrote.

By 1968, Bernard Berelson took the helm of Population Council as its fourth president. A year later, he published an article suggesting that if voluntary methods of birth control were not successful, it may become necessary for the government to put a “fertility control agent” in the water supplies of “urban” neighborhoods. The article was published in the Population Council’s journal, “Studies in Family Planning.”

That same year, May signed an ad paid for by the Hugh Moore Fund which pointed to the “flood of humanity now engulfing the earth and the urgent necessity of controlling it.” 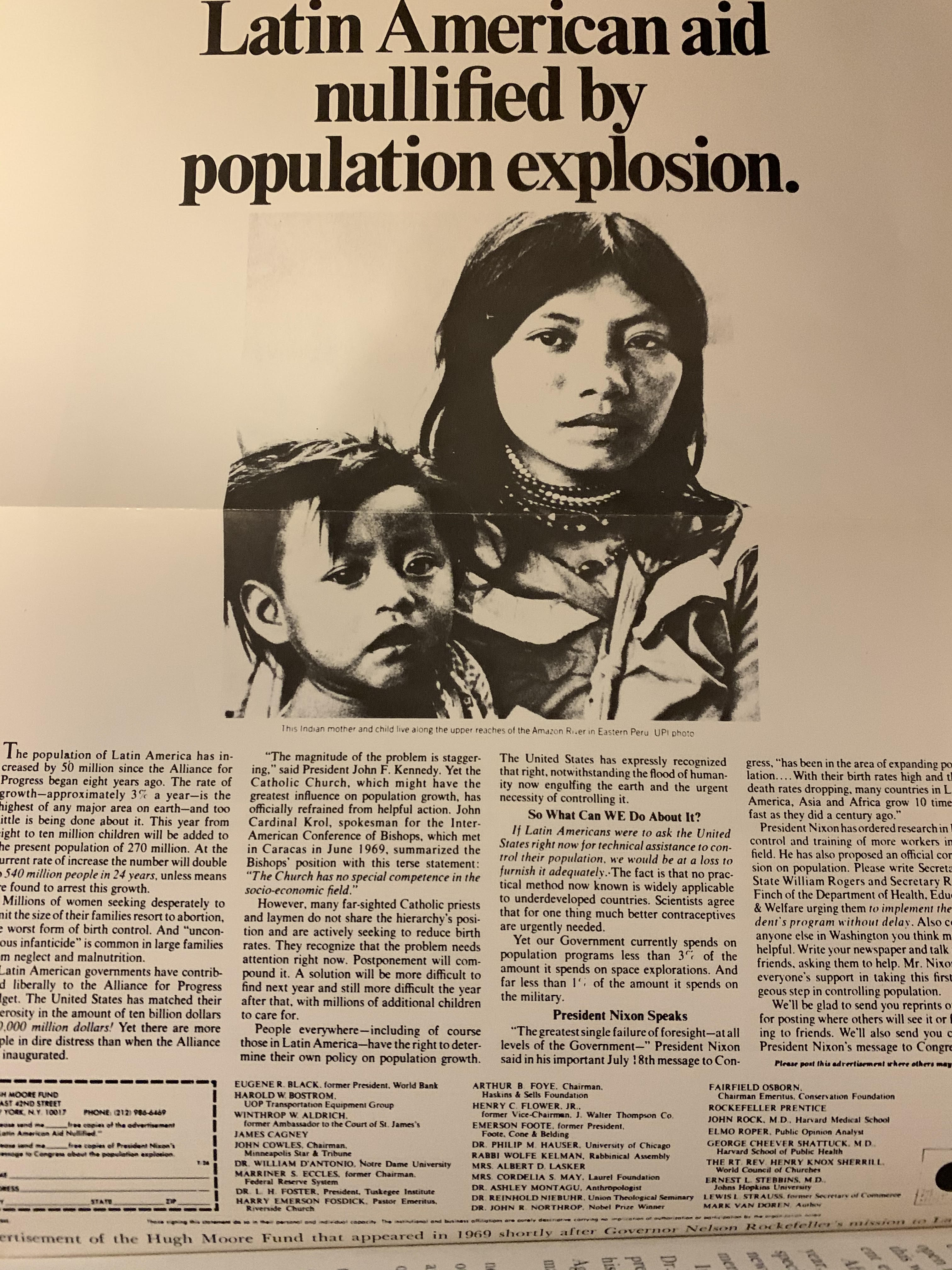 “As birth rates began falling, May and others began to focus more on immigration,” noted the LA Times. Her population control goals centered on “curbing what she perceived as the lethal threat of overpopulation by trying to shut America’s doors to immigrants,” wrote the New York Times, adding that May believed the United States was “being invaded on all fronts” by foreigners, who “breed like hamsters” and exhaust natural resources.” 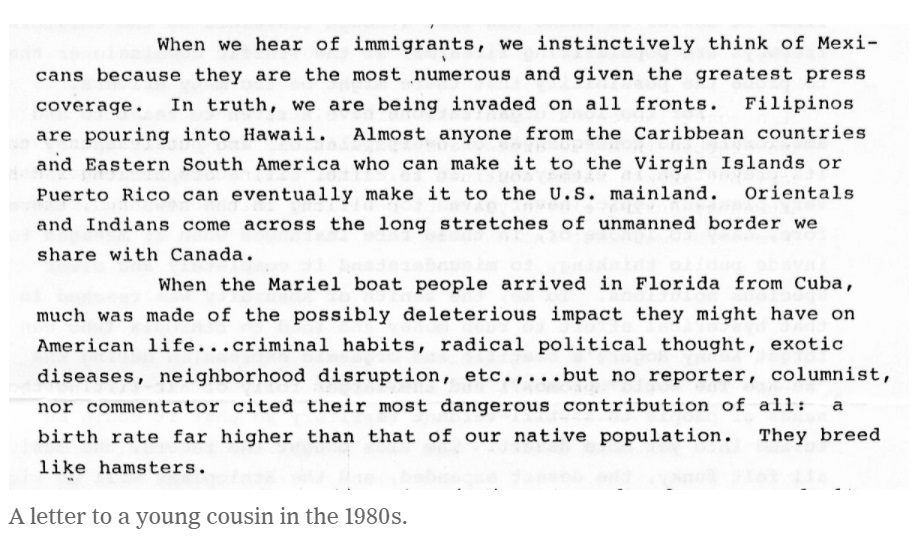 According to one former Population Council employee, Shannon Harvey, these immigration “concerns” are still embedded in the Population Council. Harvey’s recent Twitter thread claimed a VP once expressed concerns about African immigration into Europe. Harvey tweeted, “At a donor event a VP made this case for family planning: ‘There’s widespread concern about 4bn people in Africa: poverty, environment, famines… With 1bn Africans, immigration is more than [Europe] thinks they can handle. With 4bn people it will be a much bigger problem.’”

Harvey also added, “My former employer is an INGO that was supported by $20M+ in donations from a white nationalist until the mid-70s and whose senior leaders advocate population reduction in sub-Saharan Africa to combat climate change. But go off about how black lives matter.” 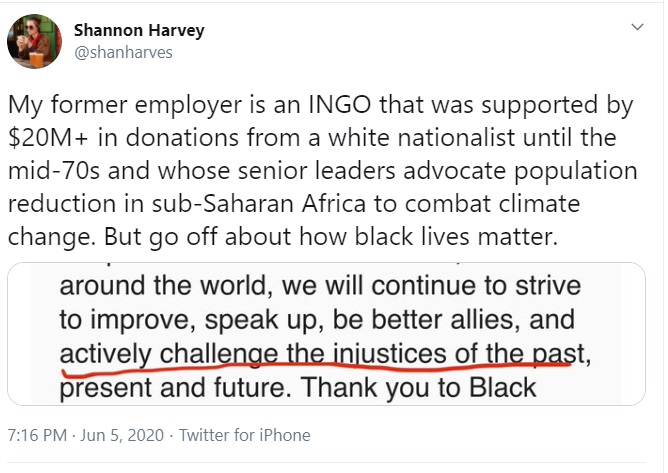 According to the New York Times, Cordelia May once sent news clippings about riots in Los Angeles to her friend Garrett Hardin, one of NARAL Pro-Choice America’s eugenicist founders and a staunch defender of Margaret Sanger. (NARAL also recently came under fire for employees’ allegations of racism.) Hardin told May that he felt the media was perhaps noticing “the predominant Latinity of apprehended criminals” in California and that “maybe the blacks are less than saintly.”

“The idea of sterilization as punishment is unrealistic,” Hardin added, “But if we think of it in fact as helping the woman, the family and the world, sterilization doesn’t seem so bad.”

Hardin also believed that “[i]n the case of overpopulation… the coercion could take the form of China’s one-child law, or regulations offering tax credits only for the first two children in a family.”

A 1973 letter to the Population Council from May’s office also noted her support for abortion. “[W]e feel confident that the leadership position of the council in the population field can be used to greatly accelerate the availability of abortion services worldwide on an ‘abortion upon request’ basis.”

Live Action News has previously documented how Population Council brought the abortion pill to the U.S. and set up the pill’s manufacturer, Danco Laboratories, LLC, and today, eugenics-connected groups continue to fund the expansion of the abortion pill. A 1991 book published by three pro-choice researchers claimed the abortion pill was developed “to restrict population growth in countries that were judged to be ‘underdeveloped.’ If successful, the method(s) could be extended to groups in the United States, Black, Hispanic and Native American Women (Department of Health, Education and Welfare, NIH, USA, 1969).”

This 1970 Population Council annual report shows May was on the organization’s Board of Trustees but resigned from the board in 1974 over what she called disagreement with the policy and programs. 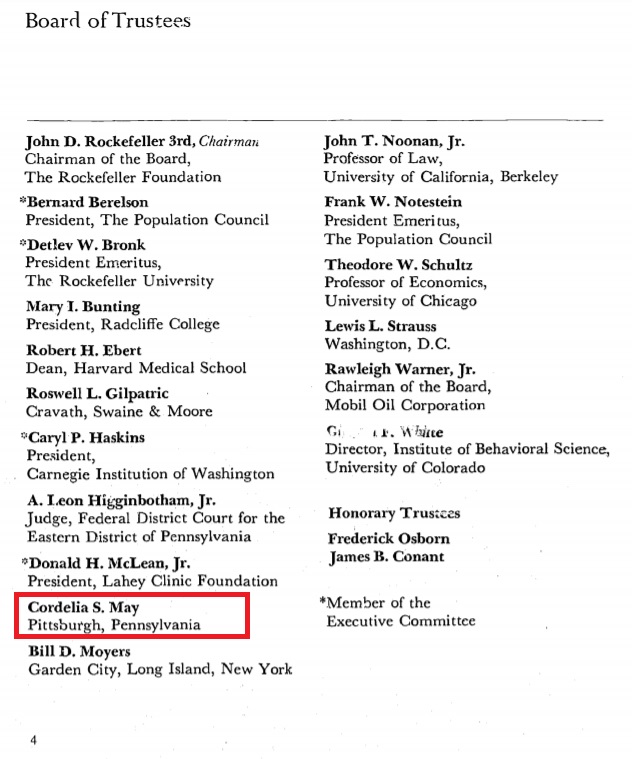 Cordelia Scaife May on Population Council Board of Trustees in 1970 (Image: PopCouncil 1970 AR)

Interestingly, author Donald Critchlow wrote in his book, “Intended Consequences,” that May did not believe voluntary family planning would work. In stark contrast to Sanger, she did not blame population growth on poor women or the Catholic Church. “The increase in our population,” May declared, “is not being caused by the unwanted children of the poorest women in the United States or by the opposition of the Roman Catholic Church. It is caused by 40 million middle-upper class women who have all the children they wanted.” Quoting Kingsley Davis, she concluded, “If having too many children were considered a crime… we would have no qualms about taking freedom away.”

Then, in 1976, May told newly elected Population Council president George Zeidenstein that the U.S. should seal its border with Mexico. An internal memo described Zeidenstein’s response as suggesting that “one got the impression” that May favored compulsory sterilization to limit birth rates in developing countries.

Whether May worked to carry out that goal is unclear, but what is known is how coercive sterilizations policies were often implemented by groups (like the Population Council and Planned Parenthood) which held the same eugenics ideologies as Cordelia May and Margaret Sanger.