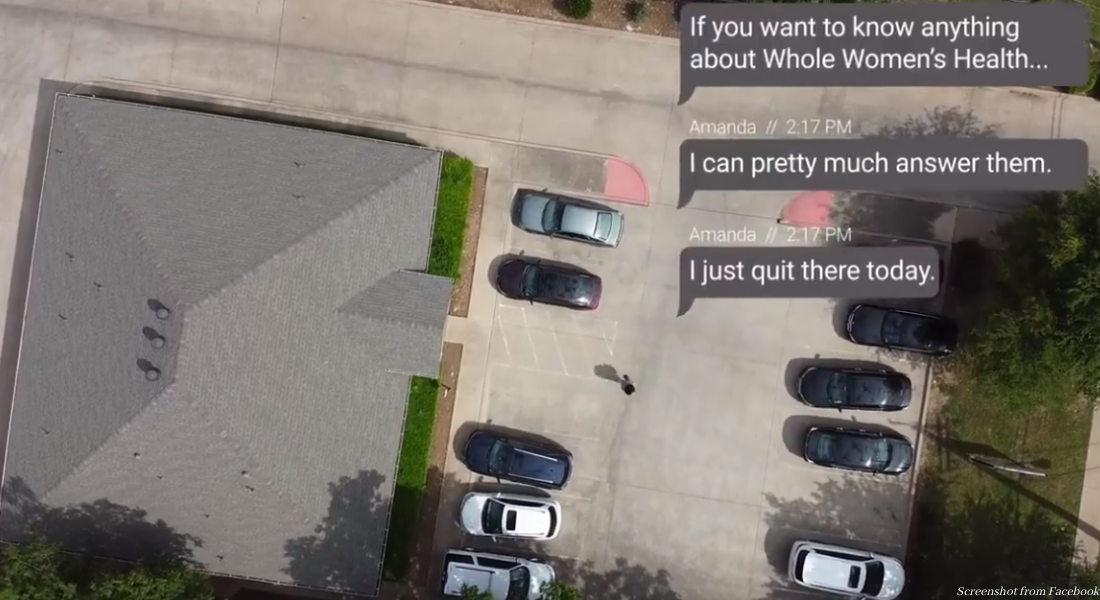 A new video released by Apologia Studios features an interview with a former employee of Whole Woman’s Health (WWH) in Texas. Amanda, whose last name was not revealed, spoke to Jon Speed, a staff pastor at First Baptist Church of Briar, about her experiences working for the notorious abortion chain.

“I have a lot of good reasons why,” Amanda said with a laugh, explaining her decision to leave WWH’s Fort Worth facility. “But the straw that broke the camel’s back,” she claimed, was that WWH made her choose between her job and her young child.

Whole Woman’s Health is an abortion chain notorious for their long history of health code violations, including rust spots on suction machines, unlicensed personnel, problems with infection control, expired medicines, and improperly sterilized instruments — with one facility in Texas racking up 17 pages of violations.

Amanda’s experiences seem to be in line with WWH’s known overall disregard for patient safety and state regulations.

Amanda explained that the facility was increasing its hours due to a desire to increase their abortions. “More patients,” she said simply. “So they can fit in more people within their certain time slot. Because they were seeing so many people at one time that, hey, if we open up more slots, we can see even more people….”

Amanda said she never went into the procedure rooms herself. Most of the staff seemed to remain uninvolved with the actual abortion process, though Amanda said she was aware of apparent abortion quotas. “They’re just trying to get people in and out, as quickly as possible,” she said.

After an abortion, Amanda explained that the remains would be placed in a biohazard bag and left in a freezer in the “dirty path” room until someone came to pick it up. Once, when the freezer stopped working, the smell was awful. “It was really, really bad,” she said. That room is sealed pretty well in the first place, so you only smelled it whenever someone had to open that door.”

According to the pro-abortion Guttmacher Institute, Texas law requires an ultrasound to be conducted “at least 24 hours in advance of the abortion” and “allows the woman look away from the image… [and] the woman may decline to listen to the description” of her child.

Despite this law, Amanda said WWH “only show[s] them [the ultrasound] if they ask.” Amanda also stated that the equipment had no capability to play sound, so women would not be able to hear their children’s heartbeats, either. “I don’t know if that was by coincidence, or what,” she said. Amanda said that the fetal dopplers that did have audio capabilities were left in their original boxes, unused. “I have never seen anyone bust them out of the box… like, brand spanking new,” she said.

Amanda reported that once, an abortionist thought he ruptured a patient’s uterus during an abortion because she kept moving, but because he only suspected the injury, he did not have to report it. “If he suspects he did it, they don’t have to file a report,” she said. “So on that one… he said, ‘I suspect I did, because of the way she was moving, and the way she started bleeding, I suspect that I might have.'” Amanda called this “another loophole” WWH uses to get around abortion regulations.

Despite leaving the abortion industry, Amanda allegedly does not identify as pro-life. Yet the abuses at the facility, both towards employees and patients, were enough to make her reach out to the pro-life movement and expose them.