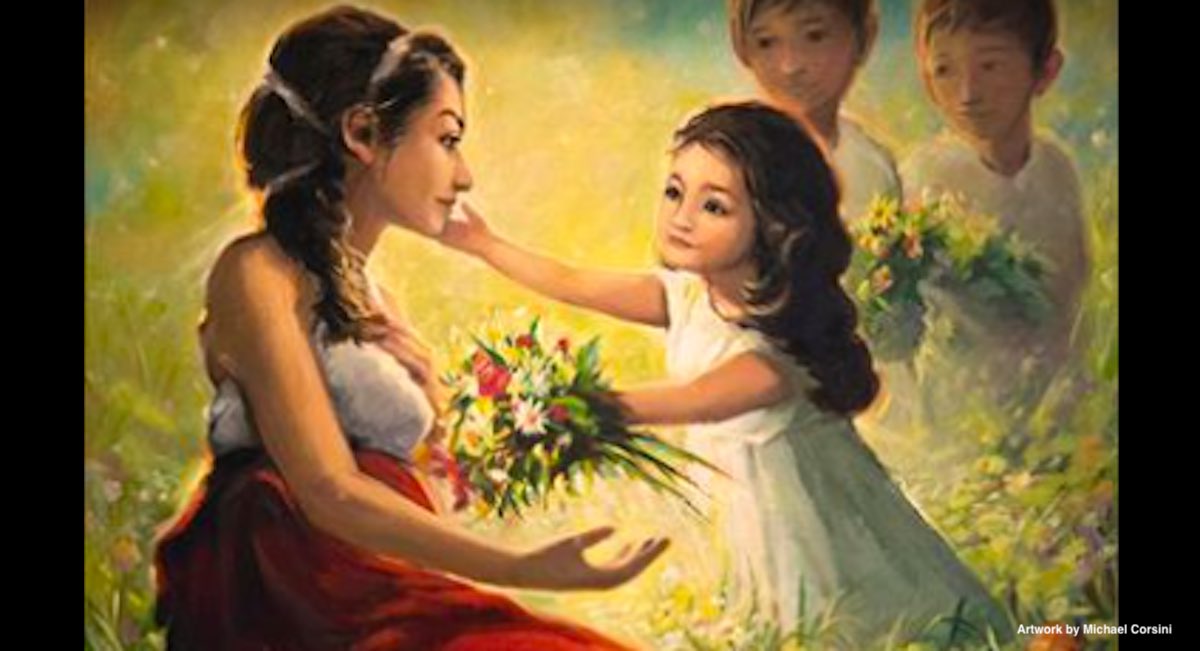 In a recent episode of Made for Love, a marriage and family life-focused podcast, Maryland-based musician and artist Michael Corsini recounted an experience he had after a 2019 abortion healing retreat weekend where he had provided music. After the retreat, Corsini was approached by a post-abortive mother who wanted to commission a painting based on a beautiful dream she’d had of a reunion with her own three children who had been aborted.

Corsini said he felt “really compelled” by the request, “as if I could almost see [what the painting would look like] immediately.” Next, however, he felt trepidation about conveying the woman’s dream accurately, fearing that he “would fail her.” His moment of calm came when he asked “for the intercession of the children” to pray for him as he worked on the project.

Corsini need not have worried. When the woman saw the painting, she wept, because although she had not described to Corsini what her living children looked like, his portrayal of her daughter lost to abortion looked just like her living daughter.

On this anniversary of the Roe v Wade decision, I think its vital to remember in our prayers all those wounded by…

In the painting, pictured above, Corsini painted the little girl’s presentation of flowers to her mother as a symbol of the “forgiveness, union, and abundant mercy of God” extended to the mother through the child. A dead branch lying in the grass with three white cherry blossoms coming out of it is meant to reflect not just the Resurrection, as in a rising from the dead, but also the creation of something “utterly new” through God’s grace.

Corsini went on to describe his intention in depicting the mother, who is beautiful, relaxed, and happy in the painting. “The main idea with the mother was to try to show a restoration of her beauty,” Corsini said, referencing what women have described as a sense of loss of both their motherhood and their femininity after abortion. Corsini’s intent with both the particular painting and his artwork in general is to convey God’s tremendous desire for the healing of each woman who has experienced abortion, and he hopes that those who see it will come to understand that “it’s possible to have a relationship with the children that we have lost.”

Corsini wrote in a Facebook post on the 47th anniversary of Roe v. Wade, “On this anniversary of the Roe v. Wade decision, I think it’s vital to remembering our prayers all those wounded by abortion… there are so many. It’s overwhelming to consider the scope of the loss. I created this painting for those mothers who have lost children in this way. To let them know that a great reunion awaits in Heaven, and how much the children long for it!”

Live Action News has previously reported on abortion healing ministries such as Rachel’s Vineyard, Deeper Still, and Forgiven and Set Free, along with many personal stories of healing.