Over the past few years, a total of sixteen babies have been born alive after attempted abortions in the state of Florida, according to online reports. The information, collected by the state from abortion providers, is compiled in the report, “ITOP Report of Infants Born Alive, By County Where Terminations Occurred, Florida,” on file at the Agency for Health Care Administration (AHCA). According to a spokesperson from the AHCA, ITOP stands for “Induced Termination of Pregnancy.”

A previous Live Action News report noted that in 2015 alone, there were several reports of abortion survivors: one in Michigan, five in Minnesota, and, as already mentioned, four in Florida — three in Alachua County and one in Jackson County. That same year, 5,132 elective abortions were reportedly committed on women between the 13th and 24th week of pregnancy; that number has since been updated to 5,195 with a total of 5,695 for all reasons, including various “health” reasons.

Four babies born alive after attempted abortions in Florida in 2015

Now, only a few years later, that number has increased substantially, especially in Alachua County. 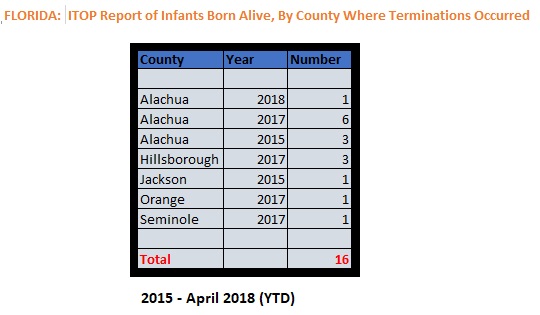 In Orange County, where another baby survived an abortion attempt in 2017, there are currently three licensed abortion facilities (down from five in 2016 and six in 2017) including two Planned Parenthood facilities and a late-term facility operated by the infamous James Scott Pendergraft.

Florida’s official definitions for how abortion providers are to file their reports define a baby born alive as one that is breathing, has a beating heart, or has voluntary muscle movements after expulsion:

What happened to the babies who survived the attempted abortions is unclear, as no additional information was available from the reports.

Florida law requires that “[a]n infant born alive during or immediately after an attempted abortion must be immediately transported and admitted to a hospital pursuant to s. 390.012(3)(c) or rules adopted thereunder.” The law also requires that any employee of a hospital, physician’s office, or an abortion clinic who is aware of a violation of the born-alive law must report it.

In 2013, as Live Action News has previously reported, during hearings in Florida about protecting abortion survivors, lobbyist Alisa LaPolt Snow (representing the Florida Alliance of Planned Parenthood Affiliates), admitted to the Florida legislature that Planned Parenthood takes issue with allowing infants born alive after failed abortions to be transported to a hospital.

In the video, the Planned Parenthood spokesperson states that the organization believes the decision about whether to assist a baby who survives and abortion should be left up to the woman and her abortion provider. The shocking dialogue shows the depraved mentality behind abortion – that even if the baby escapes the horrific procedure alive and is struggling to survive on the table, abortion providers still want the power to terminate that child’s life.

To date, the state has only reported one third trimester abortion since 2015.

Reports detailing health inspections at Florida abortion facilities for 2016 reveal that deficient practices were identified in 23 of the 68 inspections conducted by health officials that year, and 15 out of 55 in 2017. Inspectors found expired medications, missing documents, discrepancies in medical records, inadequate equipment, and one including missing documentation on gestational age, among other infractions. In addition, in 2016, state fines were issued in 20 instances where abortion facilities filed late ITOP reports. The following year, in 2017, fines were assessed in 10 instances for facilities which filed late reports.

Infants born alive inside abortion facilities have haunted the abortion industry for many years, as Live Action News has documented several times. In fact, one national news outlet even dubbed the term the “dreaded complication.” In 2013, Live Action’s undercover cameras exposed the chilling admissions of abortionists inside America’s late-term abortion industry during third trimester abortions and partial-birth abortions. Although these abortionists confess to the humanity of often viable, fully developed children, they inflict inhuman and cruel abortion procedures against them.

In the video above, you can hear one abortion staffer telling Live Action’s undercover patient that “one medical definition of a baby, I think, is, technically, until it’s born. Until then, when it’s in gestation it’s considered a fetus.”

This kind of delusional dehumanization of preborn children is the very reason why abortion is so prevalent today.