UPDATE, 11/7: A second federal judge has also blocked the conscience rule from going into effect. The first judge was in New York; the second is in Washington. The Hill reports, “The latest ruling marks the second time in as many days that a judge has ruled against the administration’s policy, and ‘provides an extra layer of protection against appeal’ by the Trump administration, said Washington Attorney General Bob Ferguson.”

11/6/19: On Wednesday, the Trump administration’s HHS conscience rule allowing medical providers to decline providing morally-compromising procedures was blocked by federal judge Paul Engelmayer. The rule, which was originally set to go into effect on July 22, 2019, was delayed until November 22, 2019. It would have valued the rights of those in the medical field by allowing them to opt out of assisting with “abortion, sterilization, euthanasia, and other procedures that would violate their consciences without being subject to discrimination, retribution, or coercion for abiding by their religious beliefs.”

Judge Engelmayer claimed that the rule was “unconstitutional” and “shot through with glaring legal defects.” He further explained that it “violated the Constitution’s spending clause by allowing the administration to cut off funds approved by Congress to providers who do not comply with the rule by forcing employees to perform services to which they object.” Planned Parenthood, one of the pro-abortion groups challenging the rule — along with 19 states — soon applauded the decision, tweeting, “Today, a federal district court has BLOCKED the Trump administration from providing health care workers a #LicenseToDiscriminate. Let’s be clear: all patients should be able to access the care they need without judgment or discrimination. Health care is human right.” 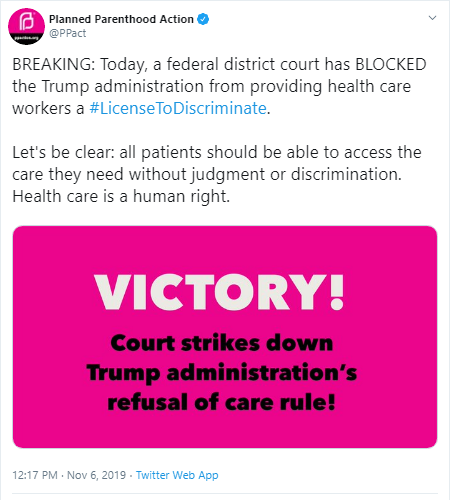 What both Judge Engelmayer and Planned Parenthood seem to miss is that the First Amendment doesn’t just guarantee a freedom to worship as we choose, but freedom of religion — and this includes exercising the ability to exclude oneself from an act which Americans believe violates their religious or moral conscience. And abortion (the deliberate killing of humans in the womb) definitely violates many Americans’ religious and moral beliefs and is not health care, no matter how much Planned Parenthood repeats the claim.

At National Review, Alexandra DeSanctis points out that opponents of the conscience protection rule view “moral and religious objections” (scare quotes included) to things like abortion — which kills humans in the womb — with disdain. DeSanctis calls the ruling “harmful legislating from the bench,” adding:

For those who have deemed certain procedures — abortion chief among them — an essential human right, there can be no protest or resistance from Americans who refuse to take part on the grounds that it kills a human being.

Such objections are, to the progressive zealot, mere “religious beliefs” that can be mocked in scare quotes and that must be tossed aside when duty calls. Blocking conscience protections such as those implemented by HHS not only allows health-care providers to get away with coercing employees into violating their consciences, but it increases the odds that plenty of Americans — religious ones, in particular — will be driven out of the health-care field entirely.

A federal judge has blocked an HHS policy that would’ve protected the First Amendment rights of health-care workers with moral or religious objections to abortion. The decision will allow providers to coerce employees into violating their consciences. https://t.co/h31ciEB4Yi

Science has proven that life begins at fertilization. The preborn child heartbeat begins between 16 to 21 days after fertilization. Abortion workers have told of enduring emotional trauma and regrets when they realize what abortion really does and what they have done when taking part in abortions. The freedom to remove oneself from such a horrific situation should be protected, not blocked. No one should ever be forced to participate in the death of another human being.