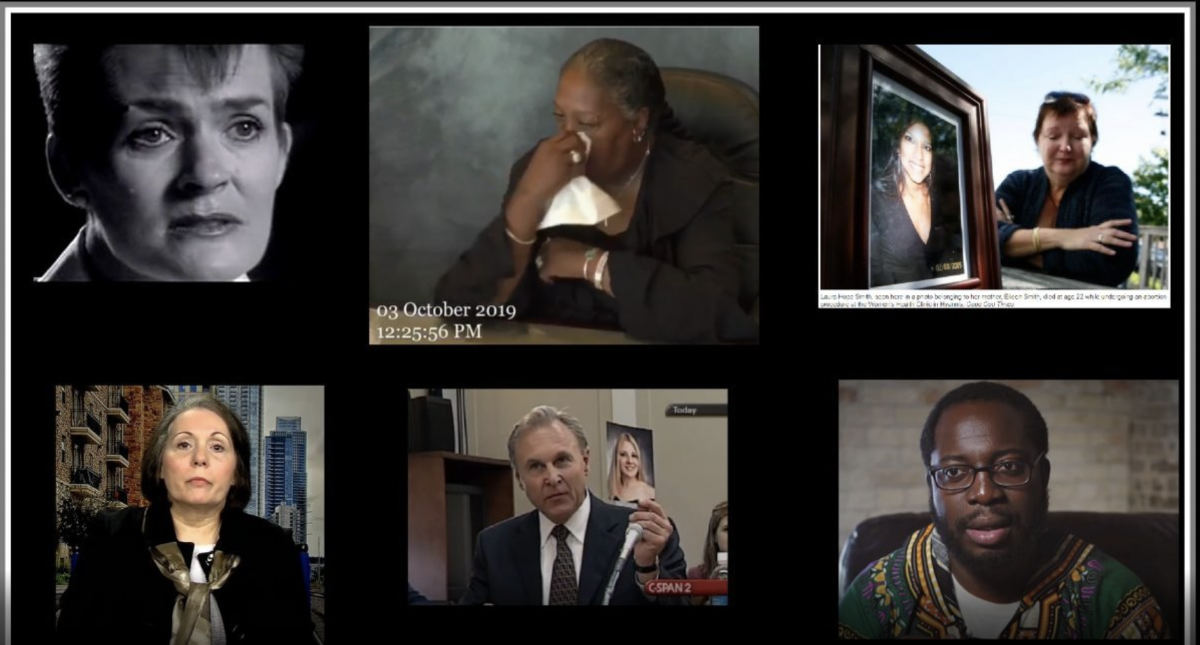 Families of women killed by legal abortion are a haunting reminder of the ongoing lie that legalizing abortion somehow made it safe.

Abortion always targets an innocent preborn human being for violent death, and sometimes the so-called “safe and legal” procedure harms or kills the mother. But a pro-abortion media with a desire to protect the abortion industry’s reputation and promote abortion tends to keep the details from the public, as they attempted to do during the trial of “House of Horrors” abortionist Kermit Gosnell, who is now in prison.

Below are excerpts from a small selection of devastated family members who know the harm abortion inflicted upon their loved ones.

Brother speaks about abortion-related death of his sister

Tyler Sheppard, brother of 24-year-old Cree Erwin-Sheppard, told of how she suffered a painful death on June 30, 2016, shortly after submitting to an abortion at a Michigan Planned Parenthood. In the video below, Tyler says:

In a chilling 911 call to authorities, Erwin-Sheppard’s mother can be heard wailing as she finds her daughter’s lifeless body in a bedroom inside her home, hours after the abortion. The panicked call and mother’s emotional screams are difficult to listen to.

In the video below, Monty Patterson gives an emotional testimony before a 2006 U.S. House Subcommittee on Criminal Justice, Drug Policy, and Human Resources of the Committee on Government Reform, where he recounts the death of his daughter, Holly Patterson.

Holly died along with her baby just days after her legal 7-week abortion from a Planned Parenthood-administered RU-486 abortion pill regimen in September of 2003. She had just celebrated her 18th birthday.

It was Planned Parenthood’s implementation of the unapproved regimen and off-label use of the abortion pill that led to Holly’s death from septic shock.

Holly was a strong, healthy, intelligent and ambitious teenager who fell victim of a process that wholly failed her, beginning with the 24-year-old man who had unprotected sex with her, impregnated her, and then proceeded to facilitate the secrecy that surrounded her pregnancy and abortion. Under this conspiracy of silence, Holly suffered and depended on the safety of the FDA approved pill administered by Planned Parenthood and emergency room treatment by Valley Care Medical Center where she received pain killers for severe cramping and was sent home. On Saturday and Sunday, Holly cried and complained of severe cramping and constipation, and even allowed us to comfort her but could not tell us what she was really going through. On September 17, 2003, she succumbed to septic shock and died while many members of our family waited anxiously, yet expectantly in the Critical Care Unit for her to recover until we were forced behind the curtain when it was clear that she was dying.

And in those last moments of her life feeling utter disbelief and desperation we formed a circle just beyond the curtain and prayed aloud, cried and screamed, “We love you, Holly” hoping beyond hope that those words would ring out and save her life. And the other members of our family who drove and flew from all over the country to be by her side did not make it in time to say, “I love you” just one last time. Holly was not alone, unloved, unprotected or unsupported; she had a large family who willingly supported her throughout her short life and tragic death.

In the weeks since we buried Holly’s body we are now able to recall and share the memories of our daughter’s brilliant blue eyes, engaging smile, laughter, unwavering determination and sheer gentle beauty that invoked our natural instinct to protect and love her, but we will never be able to forget those last moments of her life when she was too weak to talk and could barely squeeze our hands in acknowledgement of our words of encouragement. “We love you, Holly,” “Just hang in there, the whole family is coming,” “You fight this Holly, you can do it.”

“Holly was intubated, and I went and held her and said, ‘I don’t know what happened, but I’m here to help, to get you well,'” Patterson told SFGate.com in 2011, his eyes welling with the memory. “The look in her eyes said, ‘Dad, save me.'”

Keisha Atkins, a 23 year-old woman who along with her baby was killed by legal abortion February 3, 2017, as a result of a legal late-term abortion she received at Southwestern Women’s Options abortion business in Albuquerque, New Mexico.

Testifying during a wrongful death lawsuit in the matter of her daughter’s death, her mother Tina Atkins stated:

A report from the Albuquerque Journal described what transpired following the wrongful death lawsuit her family filed on her behalf. It reads:

Six months pregnant at the age of 23, Keisha Atkins spent the final week of her life trying to get an elective legal abortion in 2017 in Albuquerque.

She died midway through the dayslong outpatient process.

For that, the University of New Mexico Health Sciences Center and a private late-term abortion clinic in Albuquerque agreed to pay her estate a total of $1.26 million in exchange for the dismissal of a politically charged wrongful death/medical malpractice lawsuit, according to state and court records obtained by the Journal.

UNM, which state records show paid $365,000 of the total, was accused of negligently referring Atkins to the private Southwestern Women’s Options clinic near downtown Albuquerque after she was deemed ineligible for an elective abortion at UNM’s Center for Reproductive Health.

Southwestern Women’s Options, founded by Dr. Curtis Boyd, agreed via a court mediation to settle for $900,000 the claims that its subsequent treatment of Atkins fell below the standard of care and was negligent, court records show.

“She was referred, by a hospital who knows better, to an abortion clinic that is known to fail inspections and perform a procedure that abortion experts like Mark Nichols and Lisa Keder testify is too dangerous to be performed outside of a hospital,” Abortion on Trial wrote on their blog.

Mother says abortionist tried to cover up her daughter’s death

In 2010, Cape Cod abortionist Rapin Osathanondh was charged with manslaughter, and authorities alleged that he failed to monitor abortion patient Laura Hope Smith while she was under anesthesia. He also delayed calling emergency services when her heart stopped and later lied to try to cover up his actions. She was pronounced dead later that day. Read more here.

According to Life Dynamics, when the abortionist attempted to wake Laura up and received no response, he failed to initiate a call to 911 in a timely fashion.

The mother of Christi Stiles, a woman whose legal abortion left her in a coma with severe brain damage, recounted that fateful day with Life Dynamics. “During the abortion procedure, Christi Stile went into full cardiac and respiratory arrest and slipped into a coma after she began hemorrhaging during her abortion. She was left in a permanent vegetative state,” a post published by Life Dynamics stated.

“On July 1st [1993], the day after Christi’s 18th birthday, I drove her to the Mayfair Women’s Clinic in Aurora, Colorado,” Christy’s mom said in the video interview. In addition, Christi’s mom said:

Life Dynamics indicated that the “abortion was performed by abortionist Ronald Kuseski who received a slap on the wrist in the form of a ‘Letter of Admonition‘ from the Colorado Medical Board, for his role in Christi’s injuries.”

Christy finally succumbed to her abortion injuries decades later, in 2015.

In the interview below, Deborah emotionally described what transpired.

Marla was just 18 years old when she submitted to the deadly abortion at a Magee Women’s Hospital in August of 1989.

According to Life Dynamics’ Blog, “Deborah said that when Marla died, the funeral director asked if they should close the casket. Deborah responded that she wanted the casket open so people could see what abortion did to her daughter. This response is similar to what Emmett Till’s mom did after her 16 year-old black son was brutally killed because of his color. She refused to hide what was done to her son and had an open casket funeral.”