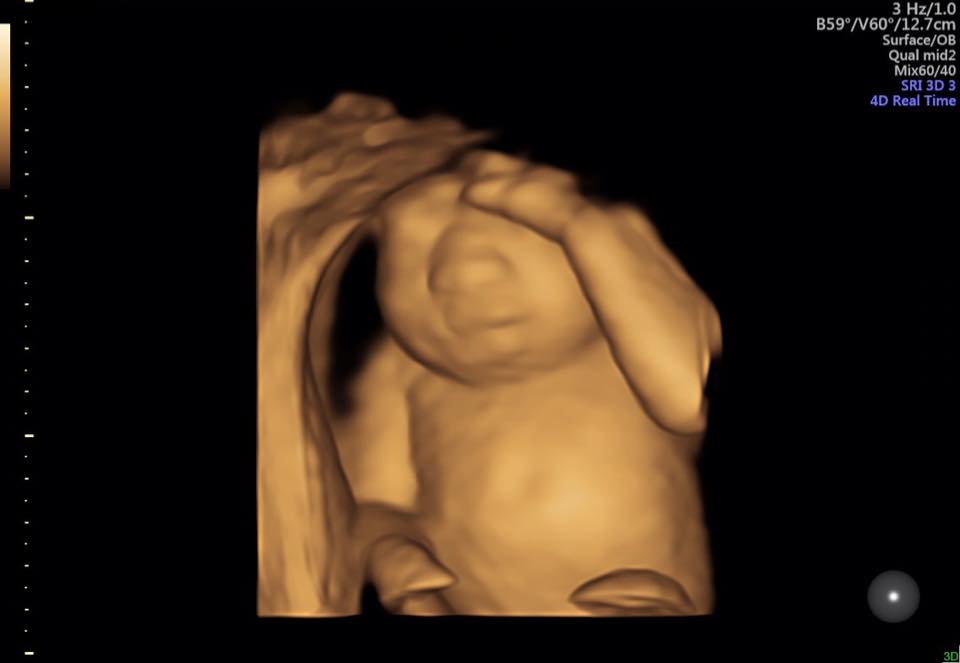 Husband, father, and ESPN writer Royce Young recently posted a photo of his pregnant wife, Keri, on Facebook that has been shared over 12,000 times. In the photo, Keri Young is simply sleeping on the couch, but what her husband has to say about her depicts a woman of incredible strength during her most difficult time in life.

At 19 weeks gestation, the couple learned that their second child, a baby girl, has anencephaly, a condition in which the skull and brain don’t properly grow. Children with anencephaly usually live for only a few minutes, hours, or sometimes days after birth. (Angela is an unusual exception.) The Youngs were devastated, but Royce said that within moments of the diagnosis, his wife was already thinking about everyone except herself.

“I looked at her laying there, her belly big with our daughter kicking away, a daughter that won’t live more than a few days, and it just overwhelmed me of how incredible this woman is,” he wrote. “[…] I thought back to the moment where we found out Eva wasn’t perfect, and how literally 30 seconds after our doctor told us our baby doesn’t have a brain, somehow through full body ugly crying, Keri looked up and asked, ‘If I carry her full term, can we donate her organs?’ […] In literally the worst moment of her life, finding out her baby was going to die, it took her less than a minute to think of someone else and how her selflessness could help.”

While their doctor wasn’t sure that organ donation would be possible, the couple has since found out that baby Eva’s heart valves, kidneys, and liver could be donated. Still, despite her initial desire to help, the final decision to donate her daughter’s organs meant an emotionally difficult pregnancy.

“Keri has been in the trenches the entire time, feeling every little kick, every hiccup and every roll,” wrote Royce Young. “She’s reminded every moment of every day that she’s carrying a baby that will die. Her back hurts. Her feet are sore. She’s got all the super fun pregnancy stuff going on. But the light at the end of her nine-month tunnel will turn into a darkness she’s never felt before a couple hours or days after Eva is born.”

He calls his wife “tough” and “brave” and thinks she is “incredible” and “remarkable” and he wants everyone else to know it, closing with: “She’s cut from a different cloth, combining wit, beauty, courage, silliness, character and integrity into one spectacular woman. And somehow, she’s my wife.” But Keri Young believes she is simply doing what she needs to do.

In her own post on Facebook back in December, Keri Young wrote about the moments leading up the diagnosis that now feel like foreshadowing. One of the last things she said before that 19-week ultrasound was that she hoped her baby “has a brain.” Then during the presidential debate that focused on late-term abortion, she thought about women facing the diagnosis of their baby and said that if it were her, she would carry her baby to term and would “love knowing my baby’s heart was still beating, even in another baby’s body.” Then she read a story about a woman who lost her child, but pumped breast milk to donate to babies in need. She told her husband she would do the same.

Keri was told that her own baby wasn’t going to survive. Now faced with this reality, she didn’t want to think about making the decision to donate her child’s organs, and though she had always been pro-life, she searched for a way to “make it ‘okay’ to induce early.” After learning that it would be possible for Eva to help save other people’s lives, the couple met with their pastor. The couple was struggling with what to do. But during the meeting, Keri Young received a phone call from her former doctor:

She told me that Liz, my new doctor at Lakeside, had said we were going to see if we could donate her organs and it would be the most selfless thing I’d ever do. That was it. I walked back into the room right as Royce was saying he wished he didn’t believe in God. Ha.

A few minutes later our pastor simply asked, “Royce, how old are you?”

“In your 31 years of life, how many lives have you saved?”

“In your daughter’s 24 hours of life she might save 50 lives. She’s going to be a very busy girl, you know.” Our daughter! We have a daughter! She’s alive!

But at one point I just said it.

That’s how I felt. I don’t want to do this. I wanted to throw myself on the ground and kick my legs like a two-year-old and just not do it. It took a good long while of talking but finally Royce looked at me like he needed my answer.

I made him shake on it. Decision made. We were continuing on with the pregnancy. Eva will have life even though it will be short. She’ll donate anything she can and do more in her time on earth than I ever will.

Knowing that their baby girl is her own person, the couple had her dedicated at church on Sanctity of Human Life Sunday. She is due to be born in early May, and her mother is fearful of that day. For now, though, she is enjoying each kick and private moment with Eva and is happy that this precious little daughter is still growing and living inside of her. The Houston Chronicle featured the Youngs’ story on February 22, helping to spread the word both of life inside the womb and of life that organ donation can give.

As Royce says, “Eva is alive and our daughter deserves to meet her mama and daddy, gave us a purpose to continue on. … [T]he experience of holding and kissing our daughter will be something we cherish forever…”