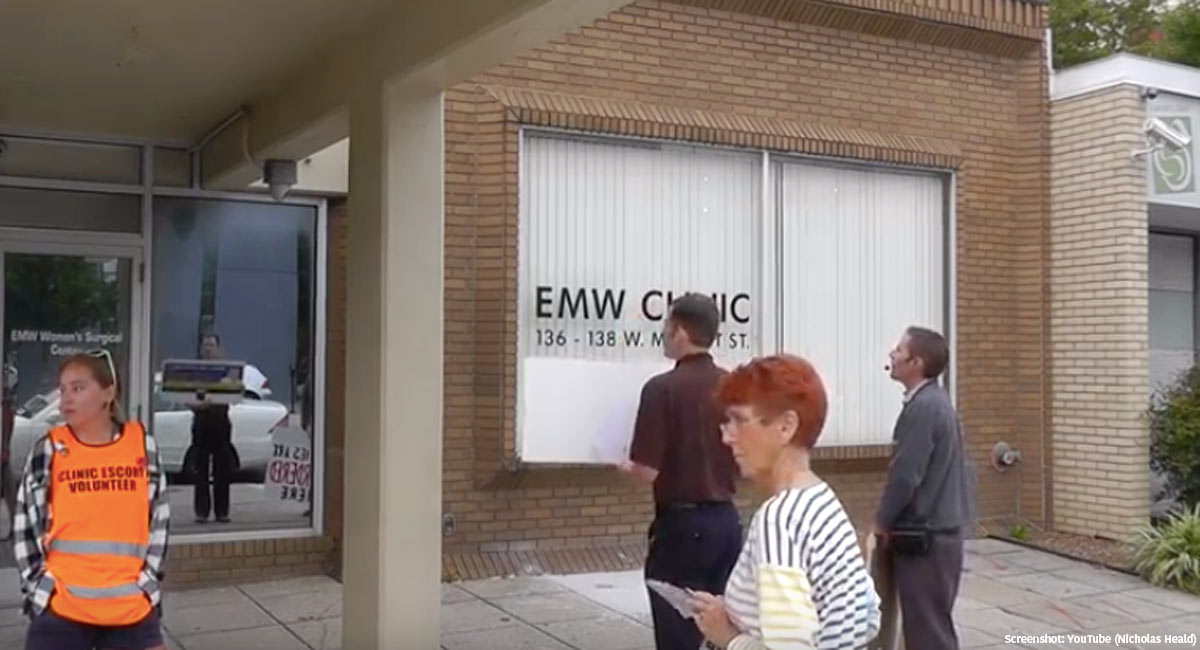 An elderly pro-life activist was assaulted by a woman leaving an abortion facility this week, causing her a broken thighbone and a cut to her head, according to LifeSiteNews.

Donna Durning has been a pro-life sidewalk counselor for 23 years, and on April 13, she was outside of E.M.W. Women’s Surgical Center in Kentucky when a woman in her early twenties exited the abortion facility. Durning told LifeSiteNews that the young woman was walking to a car that was waiting for her when the attack occurred.

“She turned and looked at me and I gave her a sweet little card,” Durning told LifeSiteNews. “I said ‘Honey, this is for you; if you want to talk to somebody there’s a phone number there.’ She grabbed me by both shoulders and literally threw me to the ground.”

The following day, blood could still be seen on the sidewalk where Durning hit her head. She also suffered from a broken femur bone but did not have any injury to her brain or skull. She had to have her femur surgically reconstructed and is expected to make a full recovery after rehabilitation.

Police officers were across the street at the time and came over as soon as they saw the attack. They took the abortion facility’s surveillance tapes. Witnesses wrote down the license plate number of the car Durning’s attacker left in.

Another pro-life activist and friend of Durning, Adele Darnowski, told LifeSiteNews that this isn’t the first time Durning has seen violence outside of abortion facilities, although nothing of this scale. She said that during the 40 Days for Life (which is currently active), however, there is an increase in these types of situations.

In March, an elderly pro-life man was assaulted while peacefully praying during a 40 Days for Life campaign at a San Francisco Planned Parenthood. Also in March, a series of violent attacks against pro-lifers participating in 40 Days for Life took place in England. And in 2014, police had to intervene when a 40 Days for Life event was ambushed by a violent pro-abortion group. Several people were injured. These are just a few of the attacks on pro-lifers that have begun to occur with greater frequency over the last few years.

Pro-life lawyer Vince Heuser told LifeSiteNews that he will ensure Durning’s attacker faces prosecution. “Pro-lifers do try to turn the other cheek,” he said, “but beating up an old lady is not to be tolerated in anyone. She’s a trouper.”