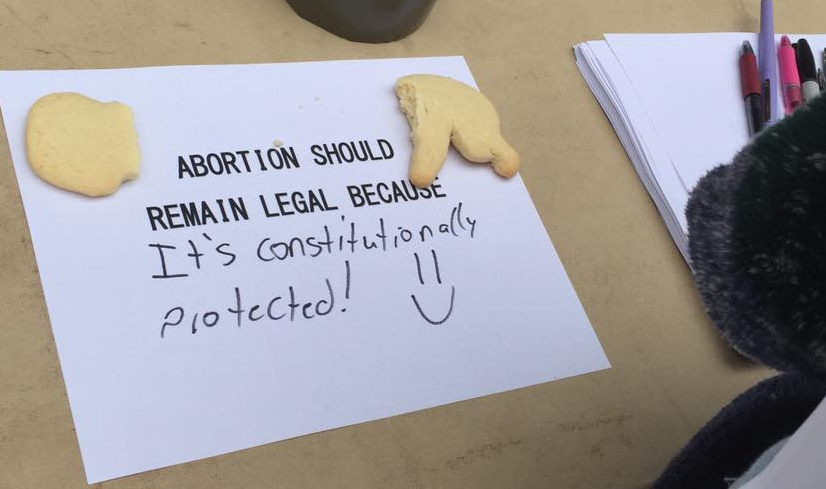 You hear that line from abortion advocates a lot, and it makes sense. After all, abortion is always a serious, somber decision that is never taken lightly…

…or it’s something to laugh about at a bake sale.

That image was on pro-life activist Matt Walsh’s Facebook page recently. He explained…

A reader named Carly posted this picture to my page yesterday. This is a pro-abortion display put together by the campus atheist club last week at the University of North Georgia. Yes, those are cookies in the shape of babies. Carly tells me the pro-abortion folks were eating the baby cookies or breaking the heads off and laughing. Another picture she shared shows a cookie lying next to its severed head over top a sign reading “Abortion should remain legal because it’s constitutionally protected.”

Of course, these aren’t the only people who think abortions are funny; some who perform them do too. According to former Planned Parenthood clinic director Abby Johnson, her boss once gloated about Dr. Warren Hern doing abortions “so far along they come out crying and looking for their mama.” But don’t just take her word that late-term abortions bring laughter at Planned Parenthood–listen for yourself.

Last year, the Center for Medical Progress released undercover footage from a Planned Parenthood abortion facility in Texas. Nine minutes and forty two seconds into the clip above, someone claiming to be a fetal tissue buyer asks if there are any “fresh specimens.” After chuckling over how the fetal remains are “all mixed up together in a bag,” staff take out parts of a child who got aborted at 20 weeks. Dr. Anthony Levatino has performed over 1200 abortions, and in the video below, he describes what a 20 week abortion looks like.

I’d like to point out that Dr. Kanwaljeet Anand’s research at the University of Tennessee suggests a fetus can feel pain by this point.

There are other examples of Planned Parenthood’s LOL moments: in a video taken at Planned Parenthood of the Rocky Mountains, a staffer jokes that there’s “another boy” out on the counter (he’s in pieces). Yet for all the amusement their work brings, there’s probably one thing that makes this crowd laugh even more, and that’s taking your money.

As sad as it is, we can’t stop people from laughing at abortion. What can we do? Stop subsidizing it.