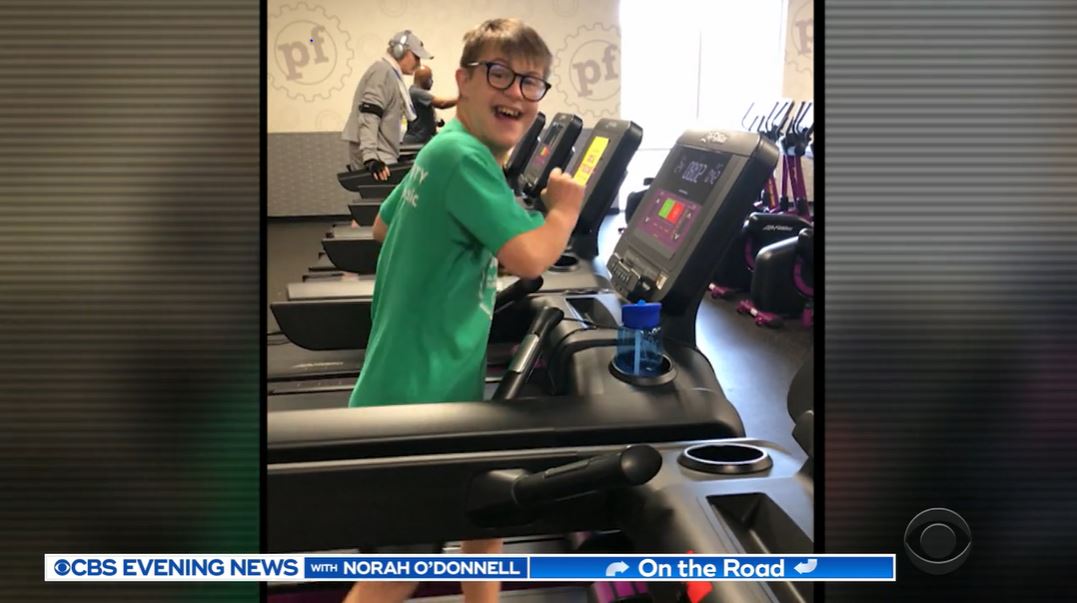 Caleb Prewitt, a 14-year-old from Jacksonville, Florida, never dreamed of being the youngest person with Down syndrome to run a mini-triathlon or of being invited to participate in the Special Olympics. Yet that is exactly what the inspiring teen has achieved thanks to the mentorship of his role model, Chris Nikic.

Last year, 21-year-old Nikic made history by becoming the first person with Down syndrome to ever cross the finish line of the Ironman. The athletic event is considered one of the most grueling in the world, consisting of a 2.4-mile swim, 112-mile bike ride, and 26.2-mile run.

In a moving interview with CBS News, Caleb’s mother, Karen, shared how her son could barely ride a bike or swim before meeting Nikic. But with Nikic’s mentorship, it wasn’t long before Caleb’s love of video games was swapped for swimming, running, and biking.

“If there was a poster with Chris on it, it would be in Caleb’s room,” Karen said.

Caleb finished his first mini-triathlon last weekend and has also received an invitation to compete on Florida’s Special Olympics triathlon team — the same team Chris is on. Karen credits Nikic with showing her son that his dreams are possible.

“Just the fact that he was so warm and inspiring helped Caleb realize that these are things that I can do, too,” said Karen.

Live Action News previously reported that Nikic’s impressive feat was celebrated on the Ironman Facebook page as a “defining moment in Ironman history.”

“Congratulations Chris on becoming the first person with Down syndrome to finish an IRONMAN,” the Facebook post stated. “You have shattered barriers while proving without a doubt that Anything is Possible!”

Nikic and Caleb are just two out of many talented individuals proving that Down syndrome is not an obstacle to fulfilling dreams. Last week, Live Action News shared the story of David Egan, a 43-year-old with Down syndrome who just published his own memoir, “More Alike than Different.”

READ: Biotech firm: Screening to ‘avoid’ babies with Down syndrome is a ‘cash cow’

In addition, 22-year-old golfer Amy Bockerstette recently became the first person with Down syndrome to compete in a national collegiate athletic championship. And last month, a 26-year-old Dutch woman with Down syndrome, known on Instagram as Enya, appeared on the cover of Glamour Netherlands.

The stories of these amazing dreamers with Down syndrome are inspiring people around the world and reminding all of us that no dream is too big. These stories are also giving hope to pregnant women who are being pressured to abort their preborn children based on a prenatal diagnosis of Down syndrome. In fact, Koh Sui Tin, a mother from Singapore, recently spoke out about her experience of having a son with Down syndrome and cited Nikic as a prime example of how people with Down syndrome can thrive and succeed despite their diagnoses.

“Also, I have since learnt that there are so many people with Down’s syndrome who have gone on to achieve significant accomplishments. Take, for example, Mr. Chris Nikic, an American who is the first person with Down’s syndrome to complete an Ironman triathlon,” Tin said.

Tragically, countless women are encouraged to abort their babies for having Down syndrome and are frequently given outdated information from doctors. In a survey, it was revealed that 63% of doctors said they tried to be unbiased while delivering the diagnosis, while 13% of doctors said they would purposefully emphasize any negative aspects of Down syndrome to pressure the parents to abort.