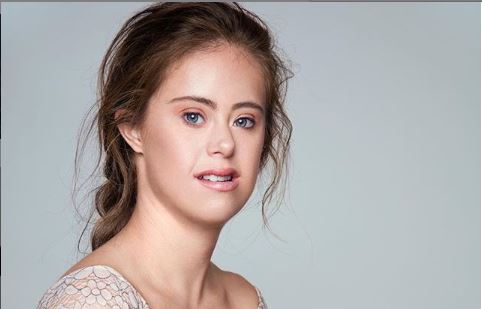 Chelsea Werner is already a champion gymnast. She won the Special Olympics United States National Championship four times and the World Championship twice — and now, she’s proving that everyone is uniquely beautiful.

“I’ve been doing gymnastics [for] as long as I can remember,” Werner, who has Down syndrome, told A Plus. “I fell like it’s always been a part of my life. I think gymnastics has trained me to be disciplined and to work hard. In gymnastics, each new skill takes a very long time – sometimes years! I think that it has given me confidence.”

Werner faced rejection from fashion agencies who told her that there simply isn’t a market for models with Down syndrome. That only served as fuel for Werner’s fire of determination.

This photo shoot with the amazing @liza_kanaeva_ was so fun! As you can see her puppy Gracie Lou and really wanted to be included 😂 🐶 #doglover #puppylove @wespeakny

“My parents and I don’t give up,” she said. “There is a market and I’m showing them!”

And she was right. We Speak, an agency that promotes body positivity and inclusion by casting models with positive attitudes and unique features, soon took notice of Werner on social media.

READ: Amazing family says daughter with Down syndrome ‘taught us to love’

“I saw her viral videos and was immediately captivated by her beautiful bubbly energy,” said Briauna Mariah, founder of We Speak. “I saw Chelsea’s potential to thrive in this industry and immediately reached out. It’s important women feel represented in the industry.”

What a fun photo shoot with @jbueti 📸 @dannyoneillstylist 👗 @koguma.hmu 💄 @wespeakny In case your curious in the second photo it’s chalk in the air… a gymnasts best friend 😂😂😂

Since her initial photo shoot with We Speak, Werner has received incredible feedback from fans on social media, including parents of children with disabilities, who say Werner gives them hope for their own children. She hopes that she is showing the world that “we are all beautiful in our own way,” and that others with Down syndrome will know “they are capable of doing things maybe they didn’t think they could do.”

Werner joins fellow models with Down Syndrome Maran Avila and Madeline Stuart in turning heads in the fashion world. Stuart has even launched her own clothing line, 21 Reasons Why, in a nod to Down syndrome, which is caused by an extra copy of the 21st chromosome. All three are showing that disability doesn’t mean a life less fully lived.