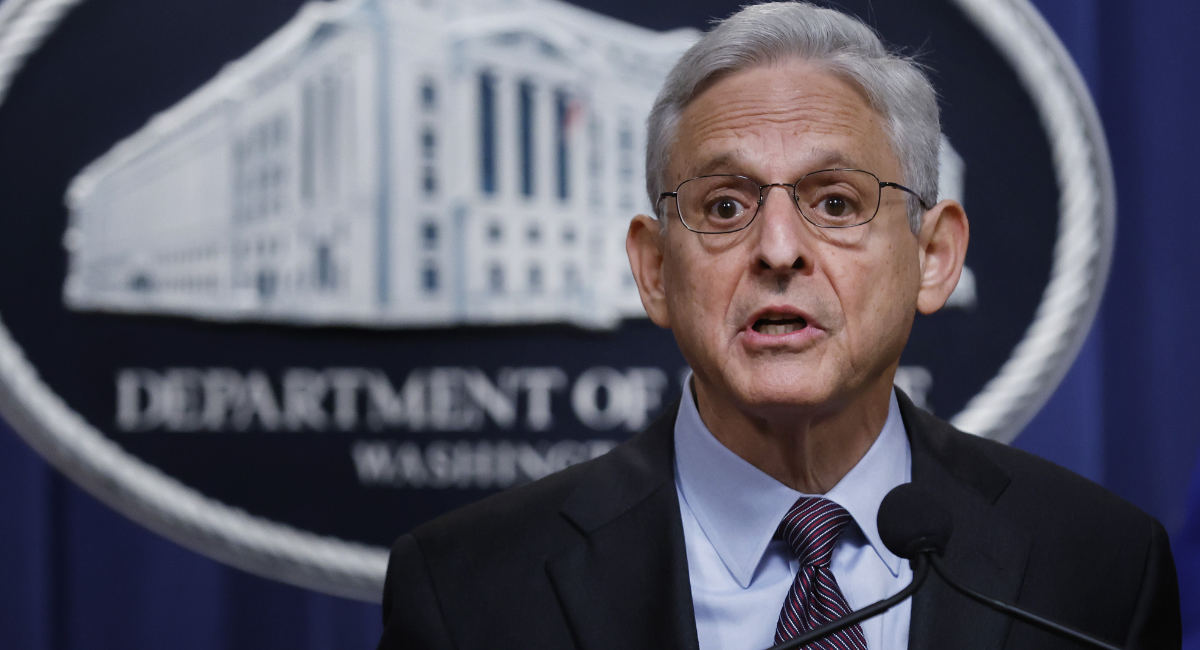 A Justice Department “reproductive rights task force” will protect abortion providers but not pro-life pregnancy centers, though the latter have in recent weeks been repeatedly targeted with violence. The Department of Justice (DOJ) announcement claims the ‘task force’ will “identify ways to protect access to reproductive health care,” meaning abortion. The DOJ also claimed its pro-abortion task force will work with “external stakeholders” such as “reproductive services providers” (abortion facilities and Planned Parenthood facilities) as well as “advocates and state attorneys general.”

Pro-abortion task forces at the DOJ are not new. In fact, the DOJ has maintained a separate and ongoing task force to investigate violence against abortion facilities for decades. The National Task Force on Violence Against Reproductive Healthcare Providers, put in place during the 1990s, remains active to this day. It serves as “a clearinghouse for information relating to acts of violence against abortion providers” and makes regular security recommendations to “enhance the safety and protection of providers.” A detailed twenty-two page booklet published by the FBI gives abortion facilities “practical information and proactive security measures that can be used to reduce risk and prevent violence against personnel and facilities.”

Yet, while local FBI offices may be involved in some investigations of pro-abortion attacks on pro-life pregnancy centers, Live Action News is unaware of any federal task force monitoring pro-abortion violence against these centers, or of any FBI published booklet being offered to pro-life groups to “reduce risk and prevent violence against personnel and facilities.”

DOJ’s head Attorney General Merrick Garland is extremely pro-abortion. Garland referred to the recently overturned Roe v. Wade Supreme Court decision as an “established right that has been an essential component of women’s liberty for half a century,” claiming the “Constitution continues to restrict states’ authority to ban reproductive services provided outside their borders.” Garland said that the Justice Department “strongly disagrees” with the Court’s decision, calling it a “devastating blow to reproductive freedom in the United States” and vowing that the DOJ will “work tirelessly to protect and advance reproductive freedom.”

Garland’s statement supporting abortion mentions the F.A.C.E. Act as a means to “protect healthcare providers and individuals seeking reproductive health” and encourages Congress to “codify” abortion. The Federal F.A.C.E. legislation was signed into law by former President Bill Clinton in 1994, after a series of criminal incidents targeting abortion clinics.

Garland also vowed to protect access to the abortion pill, writing, “[W]e stand ready to work with other arms of the federal government that seek to use their lawful authorities to protect and preserve access to reproductive care. In particular, the FDA has approved the use of the medication Mifepristone. States may not ban Mifepristone based on disagreement with the FDA’s expert judgment about its safety and efficacy.” That alleged FDA safety review has been called into question by pro-life groups.

The clear bias at the DOJ is prompting some pro-life groups and media outlets to question whether investigations of pro-abortion violence are rising to the same level of concern as protecting abortion and abortion providers.

Case in point: the Free Beacon is alleging that pro-abortion bias may be behind the DOJ’s lack of apparent concern in investigating pro-abortion attacks on pro-life pregnancy centers and churches. According to their report, DOJ Civil rights division chief, Assistant Attorney General Kristen Clarke oversees investigations of potential F.A.C.E. Act violations, an acronym which stands for Freedom of Clinic Entrances Act. The Civil Rights Division is listed as part of the DOJ’s newly formed reproductive rights task force.

The Free Beacon pointed out that Clarke, along with U.S. Attorney Matthew M. Graves of the District of Columbia, were the ones who issued an indictment against a group of pro-life activists earlier this year, charging them with violations of the F.A.C.E. Act.

According to the Free Beacon, Clarke showed her opposition to pro-life pregnancy centers following a Supreme Court ruling in June 2018 that struck down a California requirement that the centers inform patients about state abortion services. The Washington Times then quoted a tweet written by Clarke which states in part, “The anti-choice movement will stop at nothing.” Clarke then referred to pro-life pregnancy centers and organizations with the hashtags, “#EndTheLies” and “#ExposeFakeClinics.” 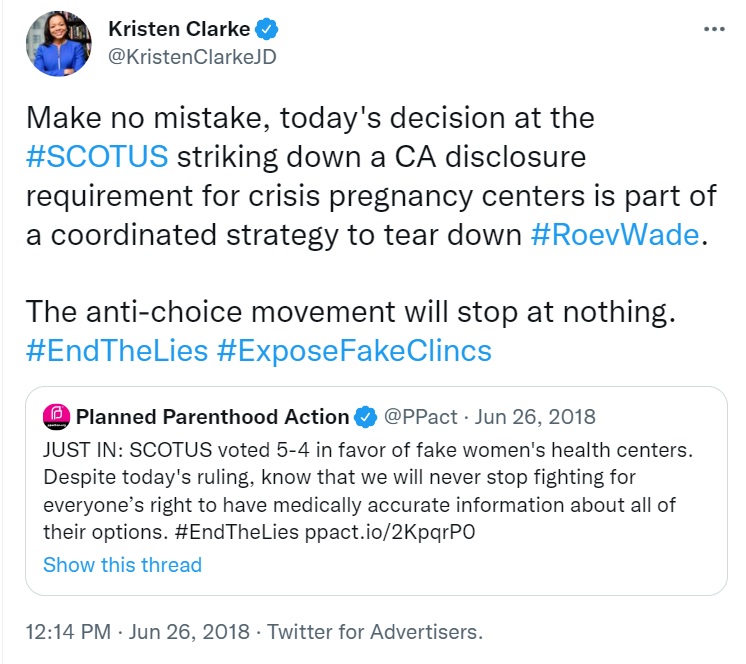 Clarke has tweeted other such hashtags that include #AbortionIsAWomansRight and has defended Planned Parenthood, even thanking them for “100 years of work safeguarding reproductive rights and women’s health,” despite being founded by a white supremacist and purveyor of eugenics.

“The Lawyers’ Committee for Civil Rights Under Law, a civil rights group Clarke led at the time, alleged that crisis pregnancy centers ‘target some of the most vulnerable women in communities today,'” the Free Beacon also reported.

The DOJ release states that the pro-abortion Task Force will monitor and evaluate all state and local legislation and enforcement actions that threaten to:

“The Justice Department… will also work with the Office of Counsel to the President to convene a meeting of private pro bono attorneys, bar associations and public interest organizations in order to encourage lawyers to represent and assist patients, providers and third parties lawfully seeking reproductive health services throughout the country,” the release states. “In order to assist attorneys working to protect access to comprehensive reproductive health services, the Task Force will centralize online legal resources, such as filed Justice Department legal briefs and information about the Freedom of Access to Clinic Entrances Act.”

The release also states that “the best way to protect reproductive freedom is through congressional action,” so the Task Force will “coordinate providing technical assistance to Congress in connection with federal legislation to codify reproductive rights and ensure access to comprehensive reproductive services.” The Task Force will “also coordinate the provision of technical assistance concerning Federal constitutional protections to states seeking to afford legal protection to out-of-state patients and providers who offer legal reproductive healthcare.”

“The Court abandoned 50 years of precedent and took away the constitutional right to abortion, preventing women all over the country from being able to make critical decisions about our bodies, our health, and our futures. The Justice Department is committed to protecting access to reproductive services,” Gupta claimed, reiterating further the pro-abortion bias within the agency.