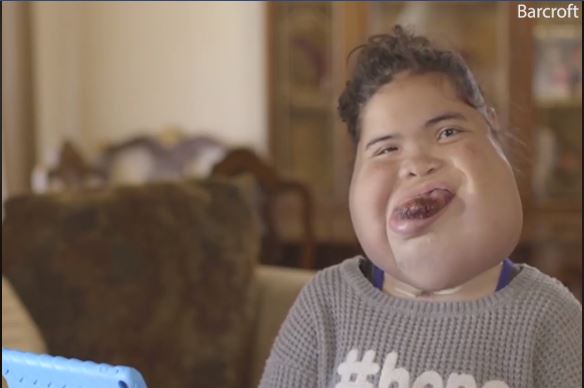 Sixteen-year-old Jacqueline Rodriguez wasn’t supposed to live to see her first birthday. In fact, doctors had such little hope for her that they advised her parents to have an abortion and end her life prematurely. But Jacqueline’s parents refused abortion, and did everything they could to help their daughter survive when doctors said she wouldn’t and succeed when others thought she couldn’t.

Jacqueline was born in 2001, and doctors told her parents that she had lymphatic malformations.

“It’s abnormal cells in her lymph node activity and these cells just want to exist in her cheeks, tongue, and the floor of her mouth,” her mother Evelyn Belen told the Daily Mail. “When I was still pregnant with her they were telling us that our daughter’s quality of life would be poor. She might not make it to her first birthday. They gave us a choice to end the pregnancy or continue. We chose life.”

Doctors attempted removing some of the tumor, which affects her ability to speak; however, it keeps growing back. Now, her medical team works to try to control how fast the tumor grows through medications which also soften the tumor. It does cause her quite a bit of discomfort; therefore, keeping it from growing larger helps Jacqueline stay more comfortable and enjoy a better quality of life. She is now able to make more facial expressions.

READ: When doctors said their baby girl would die at birth, these parents chose life

“At first she couldn’t even swallow,” said her father, Paul Rodriguez. “We had to give her formula through her G-tube. Her tissue relaxed enough where she was starting to be able to swallow just a little bit. Just kept working it. Now she takes down her formula and that’s all she has.”

Afraid of how it would make Jacqueline feel to have people stare at her or point at her in public, her mother rarely took her out. However, her son convinced her that it would be good for Jacqueline to be out and about, living a normal life.

“I was the one who hated taking her out in public cause I didn’t like people staring at her and it was my son who said, ‘Mom, it doesn’ t bother her as much as you think.” And I realize that now. Her self-esteem has just blossomed. It’s just incredible and I didn’t think we would be here at this point, and I’m so grateful.”

Her mother says Jacqueline holds her head up high when out in public. She is enrolled in regular classes at her high school and communicates through an iPad. She loves sports, and thanks to the Bay Area Women’s Sports Initiative BAWSI Rollers, an adaptive sports program that helps young girls with disabilities play sports, she remains active, including playing on the school’s tennis team.

“My parents help me by being my parents and trying to make my life as normal as possible,” she said.

In the future, Jacqueline has her sights set on Stanford University, where she plans to major in nursing.

“I want to be a nurse because I grew up in a hospital helping my nurses take care of others,” she said. “The future is bright.”

“I feel very comfortable that she will grow up to be successful in anything she does,” said her father. “She is the most amazing person I’ve ever known. To come across so many obstacles and still have confidence and perseverance – we’re really proud. That little girl just wants to live. Every day she wakes up with a smile on her face and it just encourages us. She has been the best thing that happened to us.”

Overcoming bullying and going after her dreams and goals can be difficult for anyone, but when you add in medical complications, it can be hard to remain optimistic. However, Jacqueline seems to have it down. Despite doctors’ prognosis and pressure upon her parents to have an abortion, Jacqueline will be graduating from high school this year.

“People normally stare at me and point a lot. People do say mean things,” she explained. “It makes me feel sad because they don’t know me enough to say mean things. I’m a normal human being.”

Tennis and her family and friends have helped Jacqueline build confidence. She isn’t worried about what other people think of her and sets out to accomplish the tasks before her.

“It feels good to be able to show people that you can overcome any obstacles that you may have in your life,” she said.