A pro-life Democrat incumbent in Illinois is facing a second challenge to his Congressional seat from a political supporter of Planned Parenthood. Challenger Marie Newman recently announced her second attempt to unseat Rep. Dan Lipinski (D-IL) for Congress, who has been deemed by news outlets like the Washington Times as “one of last pro-life Democrats.” This election is being seen as a referendum on Lipinski’s pro-life stance, determining if there is room for people who do not support abortion in the Democratic party. 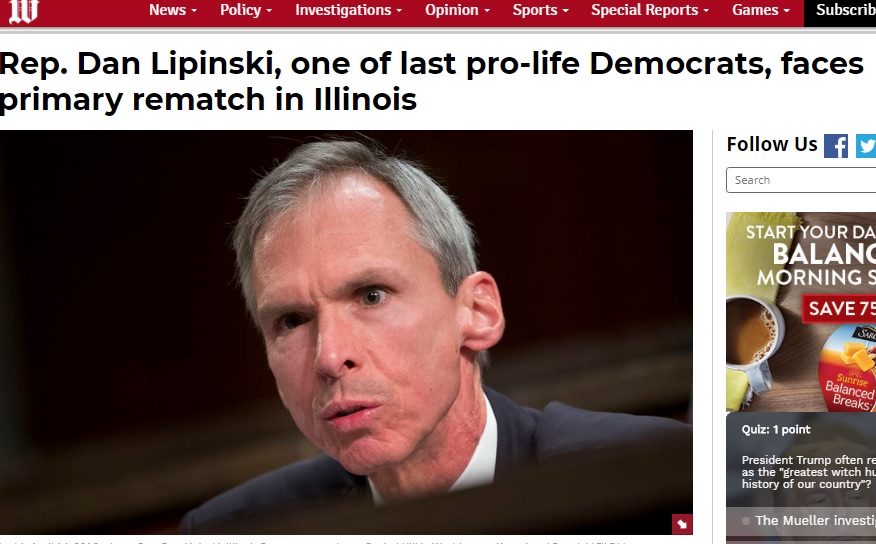 “Newman, who had never run for office before 2018, gave Lipinski the toughest challenge of his career. She secured endorsements from two of the congressman’s Illinois colleagues, Reps. Jan Schakowsky (D) and Luis Gutierrez (D), and was backed by a coalition of abortion rights and gay rights groups, which had clashed with Lipinski.” Chicago Magazine reports that, “Newman didn’t exactly lose with grace in 2018. She refused to concede to Lipinski on election night, saying, “I would like Mr. Lipinski to have a very painful evening. She then said her family would never forgive Lipinski because, she claimed, his campaign had sent out texts accusing her of running an abortion clinic and trying to defund the Little Sisters of the Poor.”

In their 2018 endorsement of Newman, Planned Parenthood went after Lipinski for, of all things, voting to defund them, and to defend innocent babies in the womb, writing:

According to local reports, Lipinski was “one of 34 Democrats who voted against the Affordable Care Act, and is such a staunch opponent of abortion that he co-sponsored the No Taxpayer Funding for Abortion Act.” 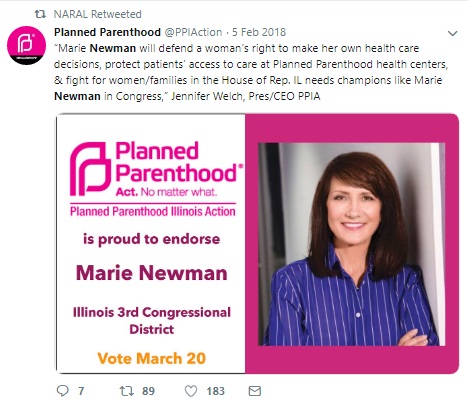 Newman, meanwhile, has had staunch financial support from radical abortion advocates. According to Roll Call, in 2018:

NARAL Pro-Choice America was one of the first groups to back her, airing TV ads attacking Lipinski in the fall of 2017. Other outside groups were slower to back her, but she eventually benefited from a coalition of progressive and pro-abortion rights groups that formed a super PAC called Citizens for a Better Illinois. That independent expenditure effort — started by NARAL and supported by the Human Rights Campaign, the Service Employees International Union, MoveOn.org, Planned Parenthood Action Fund, Planned Parenthood Votes, and EMILY’s List — said it spent more than $1.6 million on the race.

Lipinski is the co-chair of the House of Representatives pro-life caucus, and was also a recent speaker at the 2018 March for Life. The pro-life Democrat claims his opponent opposes “common sense” legislation, such as the Born Alive Abortion Survivors Protection Act. Newman’s website states that she supports “[r]eproductive health care for all, including access to birth control and abortion;” in other words, taxpayer-funded abortion. Live Action News has previously documented that funding abortions increases them.

According to a recent report from Dr. Michael New, taxpayer funded abortions in Illinois are on the rise. “In the first half of 2017, only 84 abortions were publicly funded, but in the first half of 2018 — after HB 40 had taken effect — 1,561 abortions were paid for by Illinois taxpayers,” he said in an article for the National Review. “This is an increase of 1,758 percent. It appears that approximately 10 percent of all abortions performed in Illinois are paid for with taxpayer dollars.”

Taxpayer-funded abortion may have played a role in Newman’s 2018 defeat. According to the Susan B. Anthony List, 64 percent of Democratic primary voters targeted by SBA List said they opposed taxpayer funding of abortion.