New Mexico Alliance for Life (NMAFL) has released a series of emails it obtained, asserting a cover up in an autopsy report of a woman who died during a late-term abortion. Keisha Atkins was 23 years old in 2017 when she underwent a late-term abortion at Southwestern Women’s Options (SWO), an abortion facility infamously run by late-term abortionist, Curtis Boyd. Live Action News previously reported both on her sudden death and on the questions her family had afterwards. But the answers her family received were deeply disturbing, and NMAFL says the subpoenaed emails indicate the real reason for her death was far from “natural,” as reported. 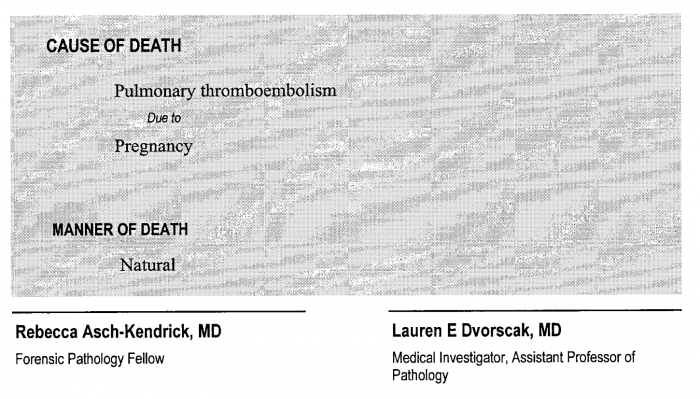 It seems the only people who see Atkins’ manner of death as “natural” are those who signed the documents certifying it in the office of the New Mexico Medical Investigator (OMI). NMAFL subpoenaed emails from several people involved with her death and autopsy, and those emails reveal that even Atkins’ emergency room physician questioned the real cause of Atkins’ death, reported by the Medical Investigator, Lauren E. Dvorscak, MD, who is also an Assistant Professor of Pathology at UNM School of Medicine.

NMAFL released the emails this week, noting in a news release:

The emails indicate that UNM Hospital treating physicians voiced concerns about the autopsy after they diagnosed the patient with a septic infection relating to the abortion… In one of the emails obtained by [NMAFL Attorney] Seibel, UNM Hospital Emergency Medicine physician, Dr. Trenton Wray wrote, “Everything about her course was consistent with septic abortion→ refractory septic cardiomyopathy [heart failure due to infection] → death.” 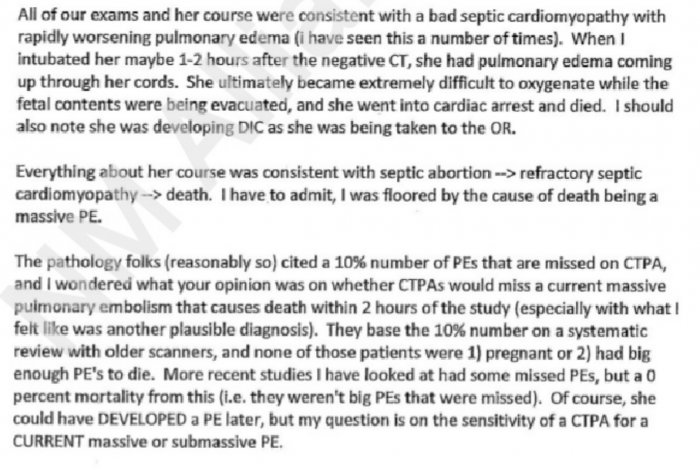 In an earlier email to Hatch, Wray said, “I have to admit, I was floored by the cause of death being a massive PE [pulmonary embolism].” (See last line.) 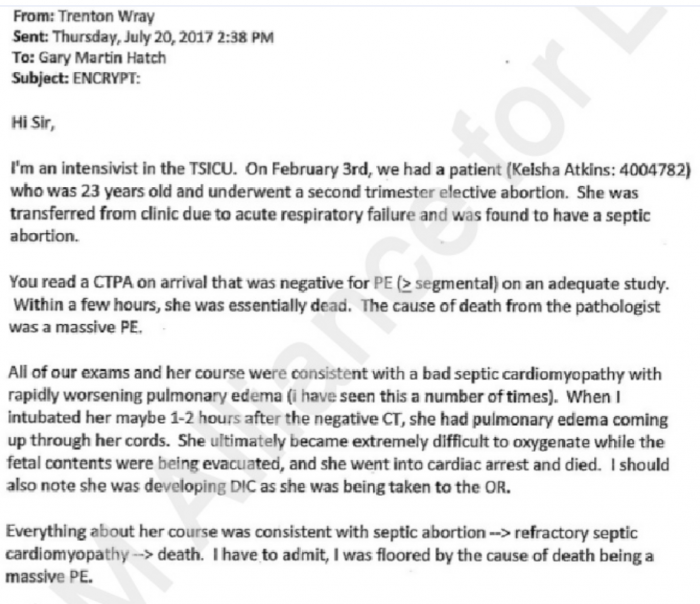 This is not a finding that would be missed in a technically adequate exam… There was no massive PE [pulmonary embolism] present at the time of scan… The autopsy diagnosis doesn’t make sense to me. Who did the autopsy? 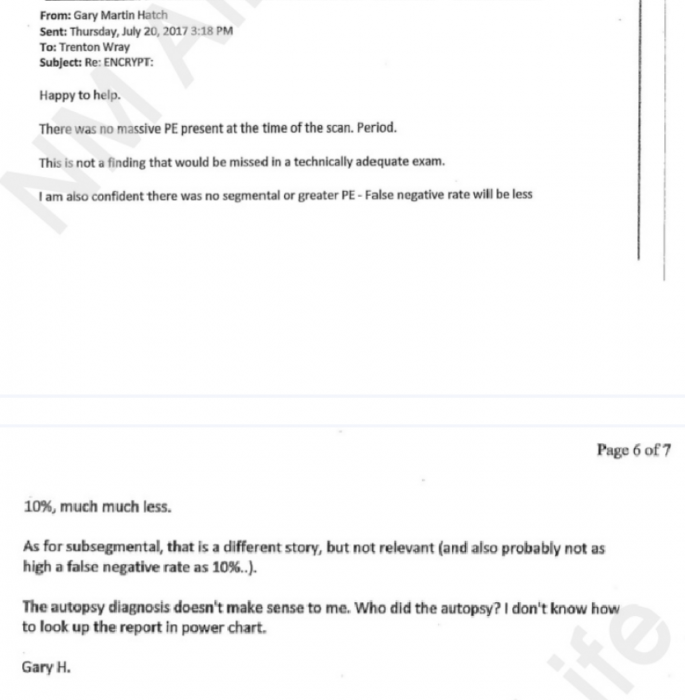 The ER doctor, Wray, replies and sends the autopsy report, saying Hatch’s comments verify his questions. Wray writes, “I wanted to make sure the CT was in fact, negative and adequate for the PE we were trying to find (which was a big one)… it’s SUPER rare for that modality to miss a PE like that.” 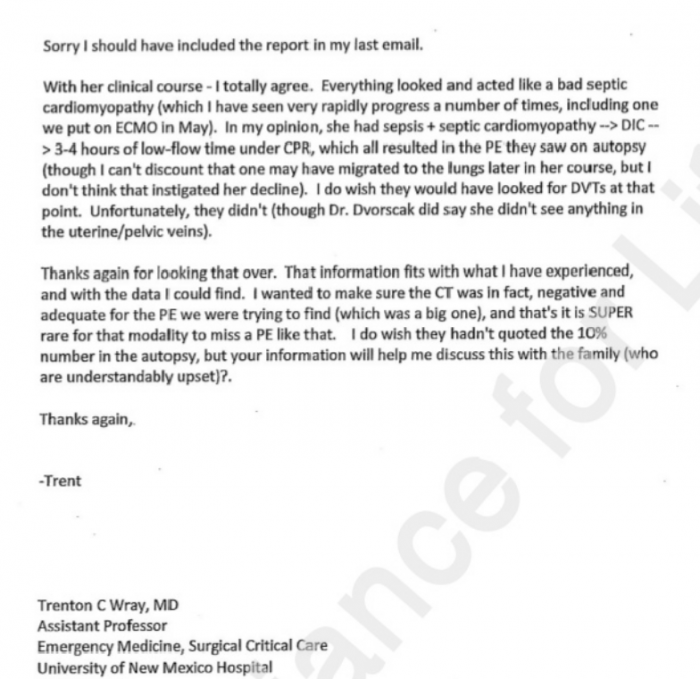 A closer read of the autopsy report reveals language that reads more as a justification for ruling the cause of death more than it does an explanation. It says:

This citation of a study over a decade old serves as a justification, in essence, saying, even though we didn’t see this diagnosis, sometimes it hides, so that must have been what happened in the initial CT scan.

This summation of Atkins’ condition could basically be translated: Since she was pregnant, she had a greater chance of a blood clot, and despite the fact she was in “remarkable'” health and, oh yeah, despite the fact the abortion process gave her an infection… but none of that killed her. It was a natural death. The verbiage on the autopsy report reads like a circular argument in its effort to explain the cause of death, and somehow justify why the OMI didn’t dig deeper to find a more specific cause. Too many questions remain unanswered, even in the report itself.

And after Dvorscak is questioned via email, she concedes that she can’t be sure how Atkins died, despite the fact that she did the autopsy report and certified it. She writes:

[T]here is no way for me to know if she embolized from a deep vein, completely separate from her sepsis.  Unfortunately, I don’t think we will know. 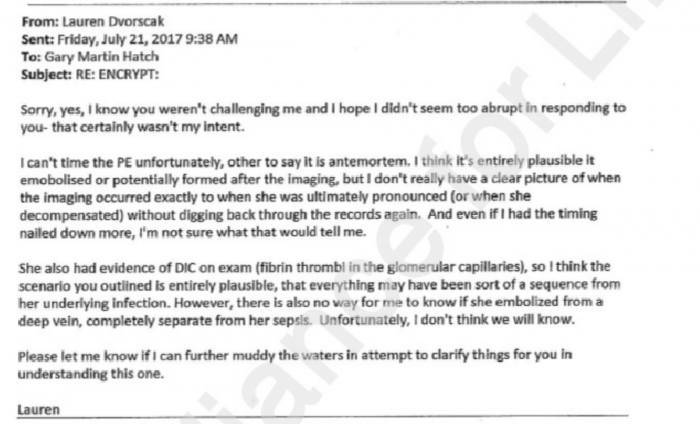 These disturbing inconsistencies further add to the cloud looming over UNM’s Health Science Center. UNM and Boyd have been long embroiled in controversy over collusion between hospital and abortion facility staff with regard to obtaining fetal body parts for research. UNM and and abortionist Boyd’s late-term abortion facility have already been cited in a congressional investigation and referred for criminal charges. Now the smells of a cover up over the death of an abortion patient has added to the stench of potential wrongdoing.

Elisa Martinez, NMAFL director and spokesperson for the Atkins estate, echoed that concern, calling the implications “chilling.” Martinez continued, “…We can no longer trust the Medical Investigator’s office to operate in an unbiased and ethical manner. To put honest doctors’ careers at risk in order to protect Curtis Boyd’s business interests is simply unconscionable and gives the appearance of civil conspiracy….”

The OMI office really had to go out of their way to come up with such a biased and compromised autopsy report, one that wholly overlooks the diagnosis of every single doctor at UNMH who treated Keisha Atkins for a septic abortion infection and symptoms from the infection. My client and her family were denied their rights to justice and due process in this matter, while the Office of the Medical Investigator has attempted to shield Curtis Boyd from medical liability, as well as deterring an investigation into the source of infection.

NMAFL has sounded the alarm about the potential conflict of interest in this case for some time now. Martinez said in April:

It is well established that UNM Hospital and Medical School have a deeply-aligned collaboration with Southwestern Women’s Options abortion center, whether it’s conferring faculty appointments for Southwestern abortion doctors or the free supply of aborted baby body parts for UNM’s experimentation. We want to ensure no conflict of interest played a role in the handling of Keisha’s situation, however serious questions remain surrounding Keisha’s cause of death.

Now the possible conflict of interest looks even more likely, which NMAFL says is “concealing” the real cause of Atkins’ death. Atkins’ family, along with attorney Seibel, say the real cause of death wasn’t “natural” as a result of “pregnancy.” Instead, they believe it was caused by the infection from the abortion and was, therefore, preventable.