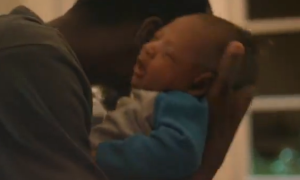 One of Chevy’s “rich guys.”

In Chevrolet’s new commercial for the 2014 Malibu, men who are involved in their families’ lives are portrayed as “the richest guys on earth.”

It’s odd – oddly beautiful, really – when a car commercial showcases the way things really ought to be. A culture that values life values the roles of men in families.

Such a culture realizes that children need their dads and that women need men to be true partners in any relationship.

Our culture’s got it backwards in so many ways.

We force men to pay child support, even when they claim to not want the child, but when they do want the child, we deny them the right to save their own sons or daughters from abortion. We tell men to step up to the plate and to “be men.” We say we want all things to be equal. But then, when we realize they don’t have a uterus, we tell them to “zip it” – but only if they oppose abortion.

As a culture, we must stop ordering men to shut up and shove their opinions when it comes to abortion. These are the lives of their children we’re talking about. And they have a right to have a say.

Dads ought to be the ones standing in the gap, saying, “This child – my child – has the right to life. I’m going to do everything in my power to save her life and give her a good life.” (Dads, if you are currently trying to stop your wife or girlfriend from having an abortion, check out this article for advice and information.)

Being a hero is what dads do – in the small things and in the big things. That’s what real men are – heroes, even when it costs them. And living for others just like this is what makes men truly rich. Not the best job on the planet, not a fancy sports car, not the ritzy office, not the college degree, and not the time and money spent on themselves.

Chevy has it right. Completely right.