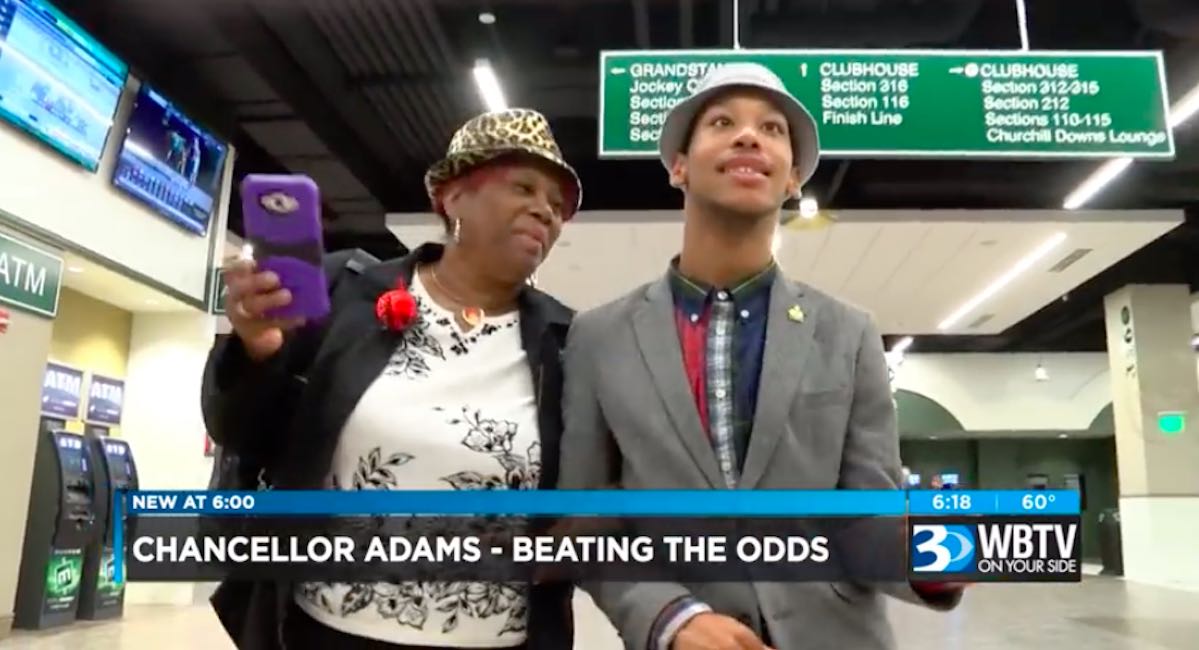 Chancellor Lee Adams, who survived his father’s attempt to kill him when he was still in the womb, recently celebrated his 21st birthday — an amazing milestone considering doctors didn’t think he would survive after his birth.

Chancellor Lee was born on November 16, 1999, after his mother Cherica Adams was shot four times by a hitman hired by Adams’ father, Carolina Panther first-round draft pick Rae Carruth. Adams was 30 weeks pregnant. Hoping that Carruth wanted to have a relationship with her and their child, Adams agreed to go to a movie with him, but afterward, as she followed him in her car, he suddenly stopped and another car pulled alongside her car and a person in that car began shooting at her. Carruth took off but Adams was able to call 911. The hitman turned out to be Van Brett Watkins, a known criminal in North Carolina, who had been paid $6,000 to kill Adams and her preborn baby.

Adams was taken to the hospital and Chancellor Lee was born prematurely. He suffered brain damage and has cerebral palsy as a result of oxygen deprivation caused by the shooting. Doctors felt it was unlikely Chancellor Lee would survive, and his mother tragically died from her injuries 28 days later. But Chancellor Lee proved doctors wrong and was raised and is cared for by his grandmother, Saundra Adams.

“Well, this, this is definitely a milestone for any young man moving from boy to manhood,” she told WBTV.com. “So it’s no different for Chancellor Lee. In fact, in some ways it’s even more celebratory because of the dire prognosis that we were given when he was born. So he has overcome so many challenges […] so many obstacles, but he has come through as not only a survivor, but a thriver. And here we are at 21 years old, my young man now.”

By finding the strength to call 911 and direct emergency workers to her location, Adams saved her son’s life. The call lasted 12 minutes as she fought for their lives. In that call, she implicated Carruth.

Chancellor Lee doesn’t speak much, but after years of physical therapy, he no longer requires the use of a walker. His grandmother refers to his brilliant smile as his “Smile Ministry.” As COVID-19 restrictions enforced mask-wearing, people commented that they missed his smile, so his grandmother found him a clear mask. She said he has overcome challenges because he’s a fighter.

READ: When their baby was born, she wasn’t breathing… but she became their ‘miracle child’

“I think he got that naturally, as I think back on that horrific night, how Cherica fought for her life and for the life of Chancellor, she was mostly concerned about saving her baby. And when I think of the determination and just the pure courage that it took for her to make the phone calls and to stay on the line, you know, I’m so grateful that she was strong enough to do that. And we’re grateful to God that it all turned out in our favor,” said Saundra Adams.

During the trial for the case, prosecutors argued that Carruth hired Watkins to kill Adams so that he wouldn’t have to pay child support. Homicide is actually a leading cause of death for pregnant women in the U.S., second only to car accidents. Twenty percent of women who die during pregnancy are murder victims.

Saundra Adams said she has forgiven Carruth and that he has reached out through the court system to send money to Chancellor Lee. He was released from prison in 2018 and has never admitted to ordering the shooting. Watkins is scheduled to remain in prison until 2041.

The next milestone for Chancellor Lee will be his high school graduation in June 2021. His grandmother is hoping to be able to have a party depending on what happens with the COVID-19 pandemic, but she is grateful for the life she and her grandson live.

“I think I’ve learned most that, you know, even though you live life going forward, you understand it better going backwards,” Saundra said of that inspiration. “So I can truly say that what was meant for evil, God has turned it around for our good and that we learned that we’re not victims. We are victorious that we have chosen to get better instead of being bitter. And that forgiveness is the main ingredient to make that possible.”