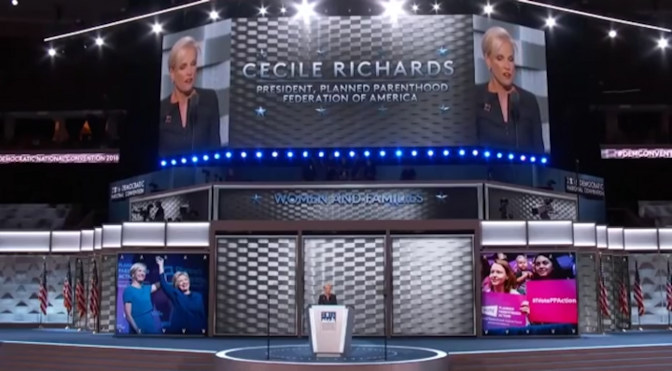 On Tuesday, Planned Parenthood boss Cecile Richards addressed the Democrat National Convention, and it was everything you’d expect: hiding the violence of abortion in flowery rhetoric about “women’s care,” lavishing praise upon Hillary Clinton, and fear-mongering about the consequences of defunding her organization.

Planned Parenthood was founded 100 years ago, giving women the care they need to live their lives and chase their dreams – no limits, no ceilings.

Some reactions have hailed Richards for her supposed “candor” of being one of the few to utter the word abortion at the convention, but don’t buy it. Hers is nothing more than masking abortion in euphemisms, when the truth is that this “care” means taking away children’s opportunity to “live their lives,” imposing far harsher, more final “limits” or “ceilings” on their dreams—like being incinerated, flushed down the drain, taken away in a medical waste truck, or tossed in a dumpster.

As first lady, Hillary declared to the world that, “women’s rights are human rights.”

True. But y’know what else is a human right? The right not to be killed just because somebody else decides they’d be better off without you existing. Unfortunately, that’s what Clinton and Richards really mean by their euphemisms: trampling on the right to life of millions of humans, at any stage of development.

As Secretary of State, she was a champion for women and girls around the globe.

Only if by “champion” you mean someone who tells them they and their societies can’t advance without embracing abortion.

To fathers who want their daughters to be paid equal to their sons.

Good news! They already are.

Nobody’s against either of those; some of us just want to be careful not to hurt the women we’re trying to help by trying to micromanage them through government.

And she has chosen as her running mate, Tim Kaine, a man who has been a champion for women and families his entire career.

As we’ve been covering, Kaine was never really much of a pro-lifer. But it is fascinating that Richards thinks he still qualified as a “champion for women and families” during the parts of his career where he supported things like parental notification and banning late-term abortion—y’know, the same policies that Richards and her ilk claim make you a sexist Neanderthal for supporting today…

Hillary has always been in Planned Parenthood’s corner, because she knows women deserve someone in theirs.

Women like Dayna Farris-Fisher, a mom in Dallas who was diagnosed with breast cancer two years ago.

Today, Dayna is cancer-free. She says she couldn’t have done it without Vivian, the Planned Parenthood clinician who stuck with her all the way through treatment.

Richards is purposefully vague about what Planned Parenthood actually did here, so we turn to Farris-Fisher’s column last fall. Did Planned Parenthood do her mammogram? No, Richards finally admitted last year her organization doesn’t do those. Further diagnostic testing? Nope.

Turns out that “Vivian” helped her obtain financial assistance for the testing and make sure she was scheduled for the right tests. Valuable work, to be sure, but let’s remember that after defunding Planned Parenthood, that money would still go to support and expand those same services through less controversial providers. Let’s keep in mind that if women like Dayna really were Planned Parenthood’s highest priority, they would have stopped murdering children long ago, eliminating objections to their tax funding almost overnight.

He wants to punish women for having abortions.

Something that (a) the vast majority of pro-lifers oppose, (b) Trump admitted was a misstatement just hours later, and (c) Trump in all likelihood never actually believed and recklessly said solely because he thoughtlessly assumed it’s what pro-lifers wanted to hear. The incident certainly reflects poorly on Trump, but not for Richards’ nonsensical, opportunistic spin that he’d actually lock women up.

And he says pregnancy is an “inconvenience” for a woman’s employer.

A comment Trump made way back in 2004, during his “very pro-choice” days (he flipped roughly around 2011). PolitiFact admits they “were unable to find any additional comments made by Trump about women employees becoming pregnant.” So really, Richards is simply highlighting what was at the time the musing of a fellow abortion ally.

Gee, it’s almost as if what Cecile Richards decides to say has more to do with what’s politically useful to present the abortion industry as heroic underdogs rather than what’s true.