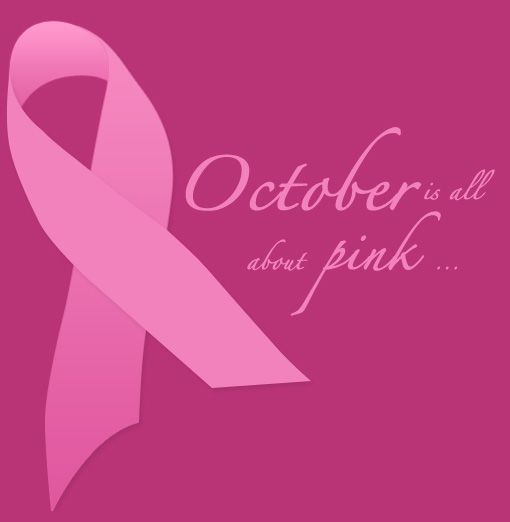 Planned Parenthood has a very important message for you this October in Breast Cancer Awareness Month: While they don’t do any mammograms despite what their CEO says, they do perform manual breast exams.

Every year about this time the number one provider of abortions in the nation tries to show its “health care” side and convince women across the nation its services are priceless because they can feel your breasts and find lumps that may save your life.

That’s right. Time and again, we learn that what Planned Parenthood does in its breast exam is what you can do in a self-breast exam. The abortion giant isn’t even licensed to provide imaging; therefore, it couldn’t do a mammogram if it wanted to.

In Texas, where abortion clinics were shuttered this week when HB2 was finally fully enforced, Planned Parenthood is desperate for any business it can garner. Saturday Planned Parenthood of Greater Texas took to Twitter to remind people it does “breast exams.” That’s true, but the tweet it bellowed across the internet was a bit misleading. 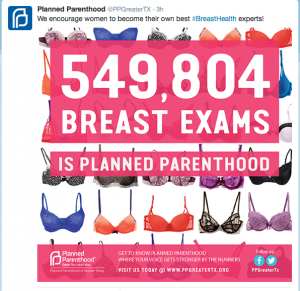 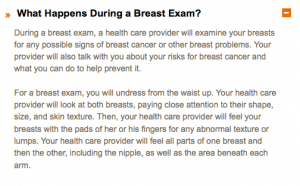 And this language really says “we can refer you for a mammogram”:

The argument that Planned Parenthood helps poor women get breast exams is a bit misleading. In recent years the Susan G. Komen Foundation has come under fire for giving hundreds of thousands of dollars to Planned Parenthood for mammography services. Sort of. It gives money to the abortion provider, who then issues a voucher for the woman to go to an actual imaging center to get a mammography. Komen has been criticized for nor simply giving the money to the actual mammography provider; instead, it pays the abortion provider, who then can coerce some more women into its services. The middle man doesn’t work for free.

In actuality, every state has some sort of health program for poor women who are unable to afford insurance. For a list of resources and referrals to free mammograms, check this link.

Also, one provision of Obamacare is that things like mammograms are 100% covered. According to the Department of Health and Human Services:

“If you have a new health insurance plan or insurance policy beginning on or after September 23, 2010, the following preventive services must be covered without your having to pay a copayment or co-insurance or meet your deductible.”

So really, there isn’t the slightest bit of need for a woman to head to her local abortion clinic. For poor women, there is more access to free mammograms than simply going through Planned Parenthood. Local health clinics and state programs are more plentiful than Panned Parenthoods anyway. For women with insurance a mammogram is generally covered at 100%, now.

So about that tweet? It’s sort of the truth. They will examine your breasts, but not in any special way that tells you anything significant without going to someone else. So bypass the middle man. It’s Breast Cancer Awareness Month, so be aware of how to get a real breast exam–and be aware of wolves in sheep’s clothing, pretending they want to help your breasts stay healthy, when really they are about abortion, and most other services are a byproduct of how they can get money and keep that abortion service alive. The more money they get from legitimate things, the more they can justify the main purpose of their “clinics”—killing babies.