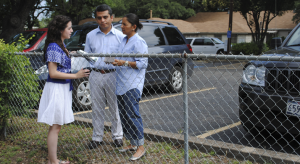 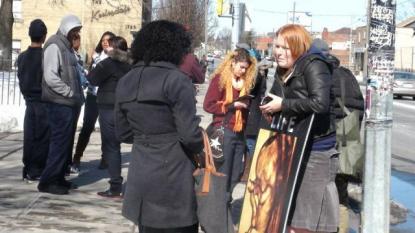 In June, the Supreme Court is expected to rule on whether to strike down a Massachusetts law that created a 35-foot zone around abortion clinics where pro-life activists were banned from approaching women seeking abortions. Supreme Court Justice Antonin Scalia called abortion protestors “counselors,” saying, “What these people want to do is to speak quietly and in a friendly manner, not in a hostile manner, because that would frustrate their purpose, with the people going into the clinic.”

This statement sparked the interest of Dean Obeidallah, a reporter for The Daily Beast, who headed out to a New Jersey abortion clinic to see what it was really like. What he claims to have seen was a variety of anti-abortion activists. Some were peacefully praying, others were “respectfully” approaching pregnant women, and others, he says, were screaming at women trying to bully them into not going into the clinic.

Most pro-life activists would agree with Obeidallah that no one should be shouting, screaming, or bullying a woman who is seeking an abortion. A woman seeking an abortion is in need of support. More often than not, she doesn’t want the abortion but doesn’t have a support system available. It is the responsibility and the honor of pro-life counselors to become that support system.

I can’t even imagine what a woman who is likely emotionally distraught over the prospect of having an abortion is feeling as she approaches this group of men.

He’s right. A woman seeking an abortion is “likely emotionally distraught,” and anyone who shouts at her is not doing her any favors. But like most of the world, especially the pro-choicers out there, Obeidallah is skipping over the most important part of his own statement: that a woman seeking abortion is emotionally distraught. How could she not be? Countless studies have told us she is. So why are these women distraught? Why are these women emotional?

It’s because abortion isn’t a medical procedure in which your tonsils are removed. Abortion is the act of ending the life of a child. Women know this. Sixty-four percent of post-abortive women have said they were pressured into it. Instead of promoting their ‘right’ to abortion, Obeidallah should be attempting to help these women answer the question of why; and pro-life sidewalk counselors should be helping the women realize that help is available.

Obeidallah also writes about the respectful women who were approaching the pregnant women:

While they were friendly, their agenda was clear: To convince every woman not to have an abortion.

Yes. Absolutely. But it’s not about convincing as much as it is about reassuring. Women seeking abortion often need just one person to tell them that it will be okay if they give birth to their babies. They need just one person to extend a hand and lead them to the right resources, to lead them away from their abusive partners, to lead them to the knowledge that they are capable and strong enough and smart enough to raise their children while pursuing their dreams. Anyone who tells a woman that she can’t raise a child and get an education or pursue her career is flat-out wrong. That is complete discrimination against a woman because of her age or status.

Obeidallah also doesn’t forget to mention the people who volunteer their time to escort unborn babies to their deaths. He writes of the pro-choice clinic escorts who keep pregnant women from interacting with the pro-life sidewalk counselors. He says they are there to help women, but if they aren’t offering these women any real choices and simply take them by the arm into the clinic, then how are they really helping?

Are they praying for these women? Are they offering these women free ultrasounds or baby gear or access to an education? No. These “deathscorts,” as sidewalk counselors refer to them, are exactly that. They lead innocent unborn babies to their deaths and lead their scared mothers to the moment that will haunt them for years to come.

Buffer zone laws simply take away an aspect of a woman’s choice. Buffer zones shut down the one group of people whom some women are looking for. Buffer zones censor important information so that abortion clinics can continue to make money off emotionally distraught women who believe they have no other choice.