The brother-in-law of abortionist Dr. Ulrich Klopfer recently shared his experience of discovering the bodies of 2,246 aborted children in Klopfer’s home after his death in 2019. Mark, who wishes to keep his last name anonymous, went to Klopfer’s home to help his sister-in-law after Klopfer died, but what he found shocked him.

As a guest on the I Choose Life podcast in September 2020, Mark shared even more details about his relationship with Klopfer and the gruesome discovery he made a few days after Klopfer’s death. He also told of his own personal experience with abortion, which made the discovery of the remains even more emotional.

As a teenager, Mark and his girlfriend were pressured into aborting their baby, and the guilt and shame that overtook him afterward led him to abuse alcohol and drugs. At age 19, he became Christian, and after meeting his wife, they began praying outside of Planned Parenthood facilities and counseling women. He and his wife now have three adult children but also lost four to miscarriage. Mark first met Klopfer 38 years ago through his wife’s sister.

“The very presence of evil”

The first time Mark realized how callously Klopfer felt about preborn children was when he overheard a discussion that left him feeling “repulsed.” At a party for his sister-in-law, he heard Klopfer and some of his staff “laughing and joking about a woman who they had done nine abortions on and how irresponsible she was and stupid and it just turned my stomach.”

“This was just business as usual for most of them,” he said. ” […] It was repulsive, I mean, it put a chill up my spine like the very presence of evil was in that room. So very, very hard to get over that. ”

Over the years, Mark saw Klopfer at family gatherings and holidays, though he was never invited to Klopfer’s home. He said Klopfer was “misogynistic” and “would buttonhole women in the corner about abortion but wouldn’t talk about it with men.” He said he sometimes wonders why he didn’t make more of an effort to work against what Klopfer was doing in his abortion businesses, but said that Klopfer made him so uncomfortable that he “didn’t want contact with him and I didn’t want my children to have contact with him.”

After Klopfer’s death, Mark’s wife went to her sister’s home to help her sort through belongings, but she soon called Mark to assist. It was the first time Mark had been to Klopfer’s home and Klopfer appeared to have been a hoarder as the house was filled floor to ceiling with so many things he could barely move through it. As they began to clear the clutter, they opened the garage door and saw there was just enough room to walk through old boxes, old medical equipment, car parts, and empty dog food containers. 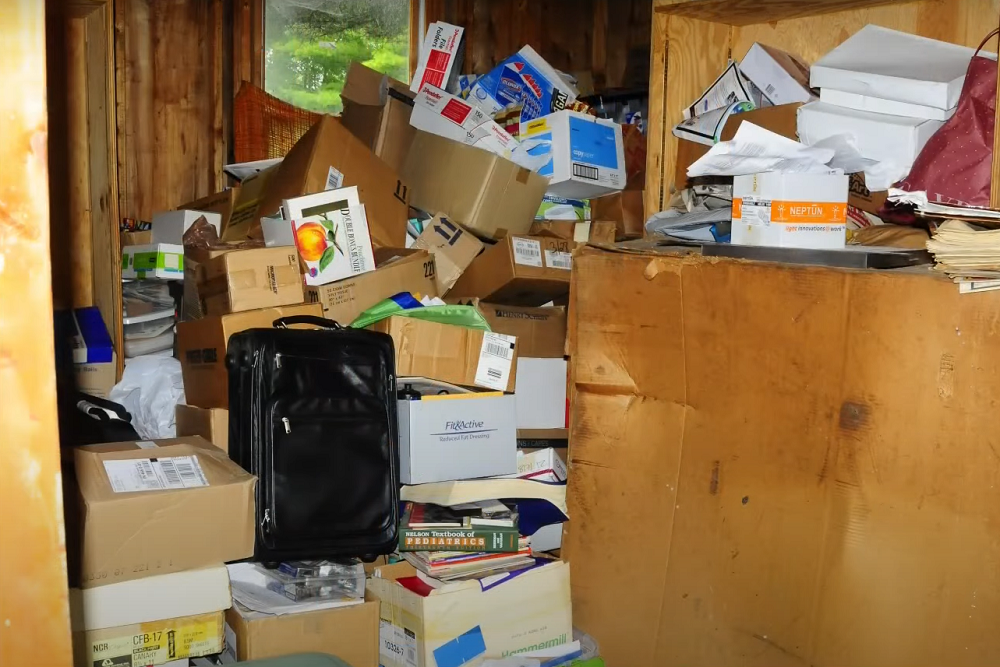 “As we were digging through the second day, it was the evening, I opened up a cardboard box, and found some bags in there with liquid in it, and as I lifted the third bag out I realized what I was looking at,” said Mark. “I almost collapsed. It was beyond anything I ever thought. My son was with me and he came and saw it and he immediately wanted to leave and never come back.”

Though the remains had deteriorated, Mark could feel pieces of bone or cartilage inside the bags. His wife began to pray and his sister-in-law seemed bewildered. Klopfer’s wife knew he was an abortionist, but after becoming a Christian, she allegedly turned a blind eye to it in order to honor her marriage.

The family consulted an attorney, who brought in more attorneys. After the authorities were alerted is when what Mark called the “media circus” began. The media’s concern for the remains of these babies was “hypocritical” to him.

“Why? why? This happens on a daily basis in this country 2,000 abortions and then you find 2,000 in a garage [and] it’s a big deal?” he said. “All of a sudden the news media is all over it! Well, where are you every day when [abortion] is happening?”

“It was a dungeon”

After the horrific discovery, Mark spent six weeks helping the authorities search Klopfer’s other properties. Each had its challenges, but the facility in Gary was particularly upsetting.

“In Gary, the operations were done in the basement,” he explained. “The basement was so hideous. […] The Assistant Attorney General went downstairs and said, ‘Don’t go down there.’ It was a dungeon. My heart broke for the fact that I could picture a woman going into this basement to have this surgery. My son told me at that point, he said, ‘Dad, I wouldn’t even have a tattoo done in this building let alone something like that.’ […] It was that unsanitary.”

After Mark returned to work, his son went to take stock of Klopfer’s lot of cars so that they could start to get rid of them. Mark received a text from his son that said, “Bad news.”

“He looked in the trunk and found deteriorated cardboard boxes and bags and he knew immediately when he saw it, he knew that that’s what he had found. There was 160 more babies in the trunk,” said Mark.

The searching continued throughout the properties, and though no other remains were discovered, Mark said that “every time we would run into a box that looked like or was close to — maybe we found a box that had an ice pack in it or something — my son would back right off.”

“The darkest side of humanity”

Mark wants people to know that storing the remains of these babies was not about keeping trophies. It was that Klopfer was “cheap.” One of the pathology labs that he would send the aborted babies to had been shut down and in the meantime, Klopfer began storing the bodies himself, and when he ran out of room he moved some to his garage. As a hoarder and a procrastinator, these bodies “ended up” there.

A year later, it’s hard for anyone in the family to get through the day without thinking about what they discovered. They have dealt with depression, nightmares, and a sadness that in the United States something like this can happen. However, the experience did renew Mark’s dedication to the pro-life movement. He said that people need to know the reality of what abortion is.

“We need to know that this is… instruments of death,” he said. “This is the darkest side of humanity that’s out there.”