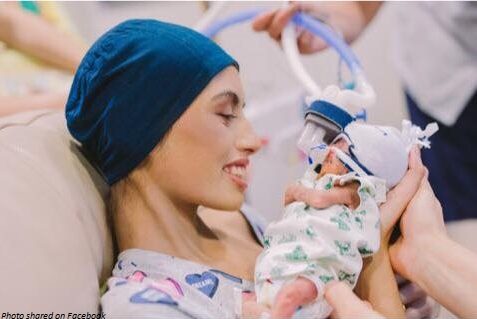 Nineteen-year-old Brianna Rawlings was thrilled to be a mother when she got devastating news: she had been diagnosed with leukemia. The brave mom chose to fight for both her life and that of her son, risking her own life for him. Tragically, she passed away last month, just days after her birthday and months after her little boy died as well. Yet Rawlings seemed to have no regrets, calling the days she spent with her son the best of her life.

Rawlings, who was from Australia, had an aggressive form of leukemia, and was given the choice to have an abortion so she could begin chemotherapy right away. Rawlings, however, refused, despite knowing that doctors said it would cut her chances of surviving in half, she told the Daily Mail. “My decision was about Kyden and Kyden only, he was my son and my little miracle,” she said. “I was very happy and excited to be a mother – all I’ve ever wanted to have is a family. I was also scared of what the world had in stall for me.”

READ: Mom fighting cancer refuses abortion: ‘I had someone else’s life to care about’

Rawlings explained that doctors diagnosed her with leukemia after she began to suffer horrible pain. “Test after test finally revealed an infection somewhere in my body,” she told the Daily Mail. “The doctors didn’t allow me to leave until they found the reason behind the pain and sickness. They checked my heart and all other organs but came up empty so they suggested a bone marrow biopsy.” It was then that they discovered she had aggressive NK-cell leukemia, a very rare form of leukemia that is usually treated with chemo. “After it was explained to me I was very surprised and angry as I didn’t expect it to be this serious,” she said. “I just thought it was just morning sickness.” But Rawlings remained committed to giving her son the best chance she could at surviving.

But tragically, things only got worse. Rawlings came down with a blood infection at six months, forcing her to undergo an emergency c-section, delivering Kyden extremely premature. At first, it appeared that Kyden would survive; when he was born, he was breathing and crying, an extremely good sign for preemies. Tragically, he died just 12 days after birth. But Rawlings seemed to have no regrets.

“Those 12 days I was able to spend with my baby boy Kyden, holding him, counting his toes and fingers and talking to him like I would when he was in my tummy. They were just so special, they were the best 12 days of my life!” she told the Daily Mail. “Then the most shocking and heart-breaking news was when he picked up a stomach infection and within hours we were told to say our goodbyes. This infection took his precious life and our son grew his wings.”

Despite her son’s death, Rawlings remained committed to fighting her cancer, wanting to keep the promise she made to her son and inspire others going through similar fights. “I want to beat this horrible disease. I believe I can do this and I made a promise to my son,” she said. “My case can hopefully help someone else’s in the future. I’m telling my story so it gives hope to others out there who are fighting their own battles. To anyone out there fighting anything like this and is reading this, keep positive, stay strong, and surround yourself with supportive people, keep away from any kind of negativity, cherish the good days and fight the bad days. Be grateful of what you have in front of you.”

After a seemingly miraculous improvement, Rawlings’ health began to fail, and she began a treatment protocol that doctors said was her last option. But on December 29, she died, according to the fundraising page set up by her sister Kourt. “Our Beautiful Brianna reached the end of her journey with us here on earth and was finally reunited with her Baby Bear Kyden,” Kourt wrote. “We are absolutely broken but at the same time at peace knowing she is no longer in pain, no longer in pieces and unsure of what news was to come next. We love you more than the stars beautiful girl, fly high and please guide those who are unsure of how to be on this earth without your contagious smile.”

Rawlings gave her life for her son without hesitation, and even though he lived just 12 short days outside the womb, his life, and the life of his mother, has touched people all over the world.