CNN guest commentator Christine Quinn defied science on Monday night when she joined CNN’s Chris Cuomo and CNN contributor Rick Santorum in a discussion about the heartbeat bills sweeping the nation. These bills criminalize abortion once a fetal heartbeat can be detected, usually around six weeks. Pro-abortion individuals such as Quinn are obviously bothered by the fact that some states are trying to prevent the killing of human beings with a heartbeat. Quinn is so upset that she is flat out denying that these are human beings at all.

Quinn told Cuomo (whose brother is extreme abortion supporter NY Governor Andrew Cuomo) that heartbeat bills “for all intent and purposes, are an end run around Roe versus Wade, and a clear attempt to make abortion illegal in new – across the country. […] This is a clear attempt to take decisions about a woman’s body and birth out of the hands of a woman and out of the hands of doctors.”

.@ChrisCuomo must think he's Captain America or something, being the purveyor of truth, but he repeatedly condemned @RickSantorum as saying "provocative things" and "pevert[ing] the facts" about infanticide. He also rushed to defend his brother Andrew's abortion record in NY pic.twitter.com/tWvOMAsEFX

She seems to immediately miss the mark here because in the majority of abortions, a girl or woman walks into an abortion facility and may speak to a counselor (who is, according to former abortion workers, essentially an abortion salesperson). She is taken into the room where the abortion is committed and waits for the doctor to enter, commit the abortion, and leave. The woman and “doctor” barely even speak. Perhaps they say hello. In some cases, the woman will change her mind about the abortion but will be held down on the table and forced to do it. These are not “patient-doctor decisions.” These are girls herded like cattle to an abortionist ready to make a buck off of killing their children.

But Quinn doesn’t stop there. She takes her pro-abortion stance into the past saying, “When a woman gets pregnant, that is not a human being inside of her. It’s part of her body.”

READ: Abortionist: ‘Human beings are pregnant with human beings,’ but so what?

Apparently, she either missed human development in science class or she is just so used to following the abortion industry’s orders that she has failed to even realize what she is mindlessly repeating. Perhaps she has never seen an ultrasound. If women aren’t pregnant with human beings, then what are they pregnant with?

Kristan Hawkins, President of Students for Life, took to Facebook to point out Quinn’s obvious confusion, saying, “So Christine Winn [sic], what is it, if what’s inside her isn’t a human?? Can my husband and I make a koala bear? Cause I really want one…”

Not only is there literally nothing else a human woman could be pregnant with besides a human child, but science also consistently tells us that a new life begins at fertilization. In fact, from at least 1968 to present day, medical textbooks and scientists have stated there is one specific moment when every human life begins: the moment of fertilization. A new human being is formed at fertilization with his or her own unique DNA completely separate from the mother. That human being simply needs time to grow safely inside his mother’s womb before being born. 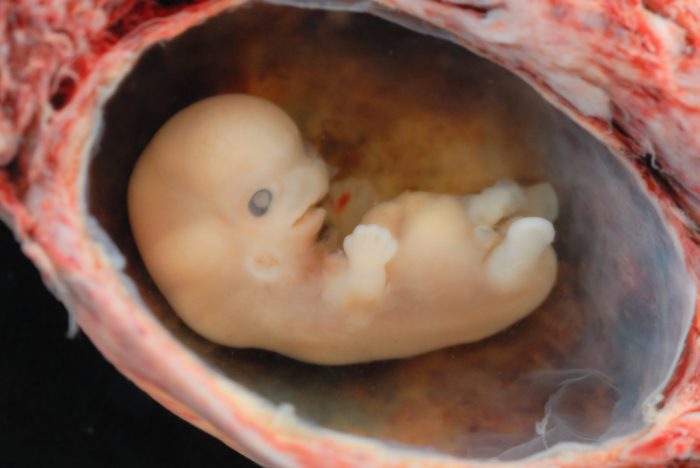 To deny the humanity of that human being is to fall in line with past discriminatory thinking that wrongly claimed Jewish people were not human beings or that slaves were not persons. Dehumanizing groups of people doesn’t make them less human, but it does show that the person doing it — in this case Quinn — is lacking basic scientific knowledge as well as compassion for the most innocent of human beings.

As for Cuomo, he jumped to Quinn’s defense, likely in an attempt to soothe his own qualms as a Catholic who is in favor of the legalized killing of human beings in the womb.