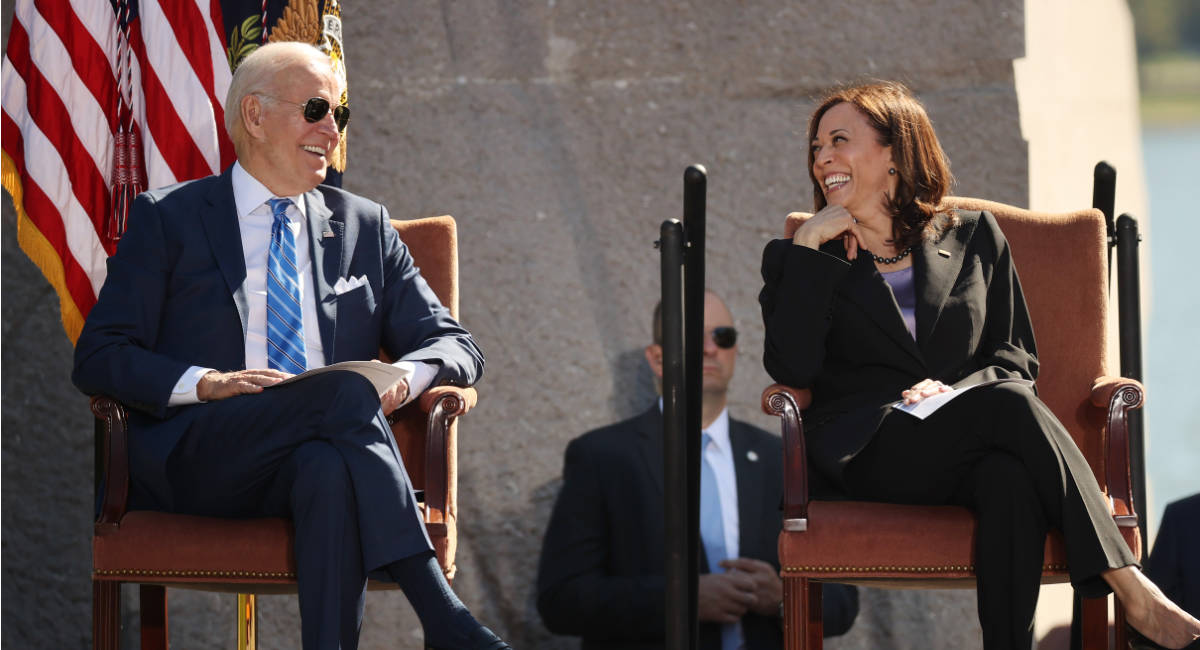 Under the guise of “gender equity,” the Biden-Harris Administration has released a national strategy which will use the executive branch to promote abortion on demand. According to the National Strategy on Gender Equity and Equality, the strategy is a “government-wide responsibility that that cuts across the work of the Biden-Harris Administration in both domestic and foreign affairs” and will be implemented by “the leadership of every White House office and executive agency.”

The so-called “bold vision” which focused on several issues, also vowed to codify Roe v. Wade. While it mentioned the term “abortion” four times, it peppered the alternative term “reproductive” health or rights several dozen times throughout the pages. 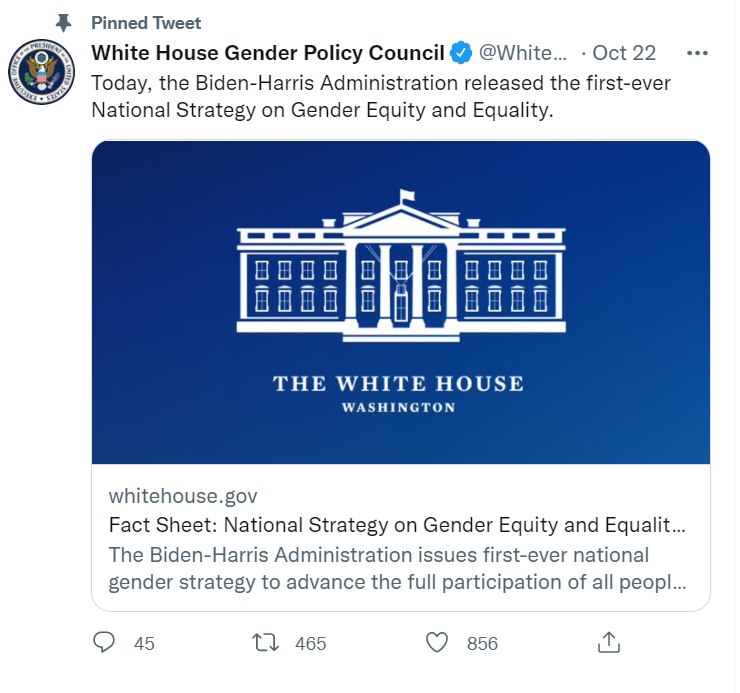 The National Strategy on Gender Equity and Equality includes a list of “ten strategic priorities” which Biden-Harris called “interconnected,” including the right to abortion on demand. However, on social media, as the tweet below demonstrates, the administration’s “bold” abortion agenda seemed to be missing: 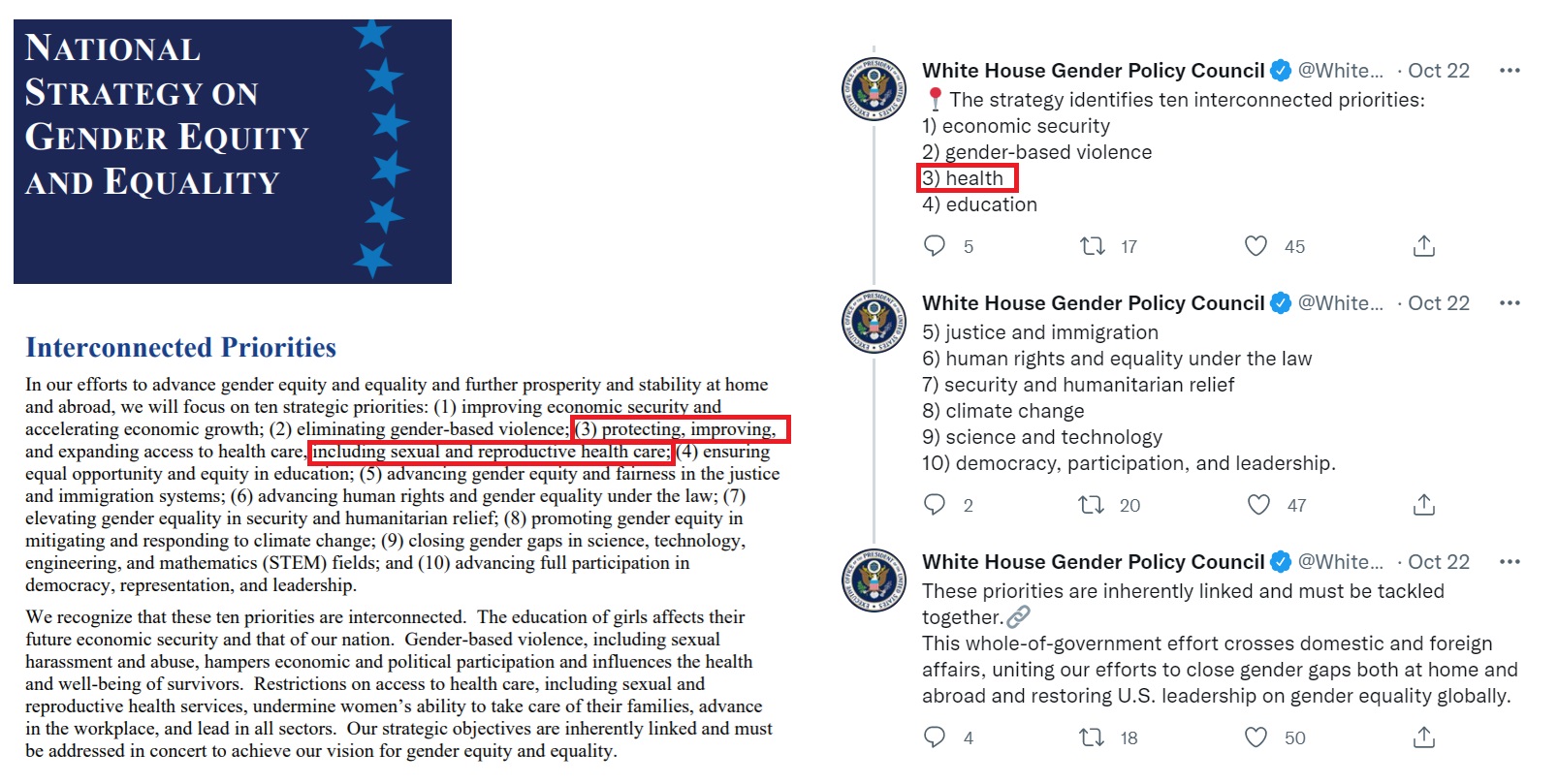 According to the plan, the Administration will “promote access to sexual and reproductive health and rights both at home and abroad.” It also lumps the alleged “right” to violently murder a preborn child in the womb among noble civil rights movements, including the ending of slavery.

“From the Emancipation Proclamation, to the passage of the 19th Amendment, to the Voting Rights Act and the Civil Rights Act, to the fight for reproductive rights and marriage equality — and countless movements and victories before and since — America has been strengthened through the years by our tireless pursuit of greater equity for all,” the document states.

The Biden-Harris Administration called the recently enacted strategy “personal to us,” claiming that it “outlines an ambitious agenda for this Administration and those to come — a roadmap to help our nation close pernicious gender gaps and propel us toward a world with equal opportunity for all people,” the document claims.

“Ensuring that all people have the opportunity to live up to their full potential, regardless of gender identity or other factors, is not only a moral imperative. It is a strategic imperative — a continuation of our national journey toward justice, opportunity, and equality set forth in our creation — that will advance prosperity, stability, and security at home and abroad in the years to come,” it also says.

The strategy failed to offer protection for the preborn child in the womb so they could live up to their “full potential” and instead falsely referred to “safe and legal” abortion as a “constitutional right” which was “established in Roe v. Wade.”

The document attempted to claim that the violent act of abortion (which kills a human being) is somehow health care, and it bemoaned the fact that abortion is “under attack,” claiming that limiting access to abortion would disproportionately affect and harm “women of color and others in underserved and historically marginalized communities.” It also pressed hard to lift barriers to “sexual and reproductive care” for refugees and immigrants.

But abortion is tethered to eugenics and is a form of reproductive injustice used to target communities of color. It will in no way benefit marginalized communities as the Biden-Harris Administration claims.

The “strategy” sets a target on domestic funding of abortion by vowing to repeal the Hyde Amendment, which is popular among the majority of voters, including many Democrats. It is estimated that the Hyde Amendment has saved an estimated 2.4 million lives from abortion — about 60,000 per year. While Hyde prohibits taxpayer funds from paying for most abortions, the Biden-Harris Administration is aware that when taxpayers fund abortions, abortions actually increase.

Despite the fact that a majority of Americans (77%) say they oppose or strongly oppose the funding of abortion in foreign countries, Joe Biden rescinded the Mexico City Policy as soon as he took office, enabling millions of taxpayer dollars to flow to international organizations that promote abortion, such as MSI Reproductive Choices (formerly Marie Stopes International) and the International Planned Parenthood Foundation — an action boasted in the strategy release.

The strategy also vowed to expand the Title X family planning program after the Biden Administration reversed the Trump ‘Protect Life Rule,’ which blocked facilities that received federal Title X funds from providing or referring for abortion. Live Action News has previously documented multiple abuses by Title X’s top recipient, Planned Parenthood, funded in the past to the tune of $60 million dollars annually. They include racism and discrimination, a failure to comply with mandatory reporting of child sexual abuse, a failure to protect patient confidentiality, and many others.

The Biden-Harris Administration’s strategy also vowed to support the United Nations Population Fund (UNFPA) which promotes abortion. A bill was introduced earlier this year to repeal UNFPA’s funding due to its ongoing partnership with China, where a genocide against Uighur Muslims is known to be taking place.

“Furthermore, we will restore U.S. global leadership on sexual and reproductive rights and comprehensive sex education, in bilateral and multilateral fora and in efforts to advance universal health care coverage globally,” the document states.

The Administration promised to “use all available levers to protect” abortion and to work to “codify” abortion by breaking down “discriminatory barriers that inhibit reproductive freedom, such as those based on gender, sexual orientation, gender identity, race, income, disability, geography, and other factors.”

They condemned Texas’ recently enacted SB8 pro-life measure, the Texas Heartbeat Act, claiming it “blatantly violates women’s constitutional rights… thereby eviscerating access to abortion… and threatening reproductive rights across the country.” The Administration even noted in the brief that Biden “also launched a whole-of-government effort to respond to the recent Texas law…“

The document, which claimed restrictions on abortion “undermine women’s ability to take care of their families, advance in the workplace, and lead in all sectors,” also singled out the Dobbs v. Jackson Women’s Health Organization case soon to be heard by the Supreme Court, calling it the “greatest challenge to Roe in a generation, putting women’s fundamental rights on the line.” The case involves a Mississippi law which seeks to prohibit abortions after 15 weeks gestation, which could save tens of thousands of human babies if upheld.

The strategy will be implemented by the White House Gender Policy Council co-chaired by Jennifer Klein, who also serves as the Executive Director, and Julissa Reynoso, who serves as Chief of Staff for Jill Biden. The Council is composed of members of the President’s Cabinet, federal agencies, and heads of other White House offices. It will partner with the Office of Management and Budget (OMB) to facilitate implementation.

Klein previously served as TIME’S UP’s chief strategy and policy officer. Ironically, it was this movement which completely ignored Planned Parenthood’s cover-up of child sexual abuse and the aiding of child abusers by the organization.

In addition, despite allegations by Planned Parenthood’s staffers that the organization had a “present steeped in white supremacy,” Klein recently acknowledged that “[w]e literally would not be here without Planned Parenthood.”